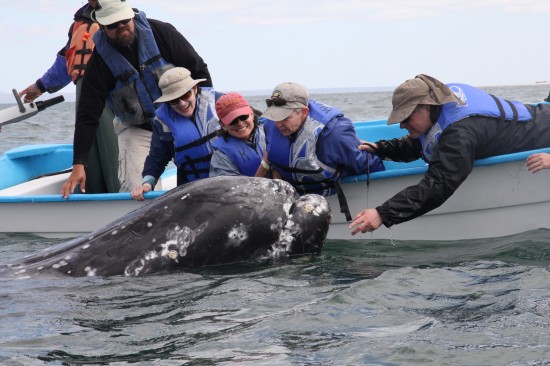 On May 10, Part I of this two-part post appeared in Good Nature: Save the Whales and Save a Community at the Same Time. Now, rejoin our small group for the story of why two women from Santa Fe keep coming back nearly every year to spend time with the gray whales of Baja.

God in the Eye of a Whale: A Spiritual Connection Across Species

Cat Scheibner and Carrie Haag are partners from in Santa Fe, New Mexico – a long way from the sea. While Cat is a relationship educator and Carrie a psychotherapist, we quickly learned when our group met for the first time in Loreto that they were practically resident experts alongside our naturalist guides, for this was their sixth visit to the whales of Laguna San Ignacio.

Meeting a friendly whale! Cat Scheibner is in the red jacket; Carrie Haag is in front of her in the blue jacket. Photo: Wendy Worrall Redal.

They came to San Ignacio for the first time in 2004, having heard about the “friendlies” – amiable whales that approach sightseeing boats – and wondering what a close-up whale encounter would be like.

Cat grew up in New England where whale watching meant using binoculars. “Seeing a whale breach a half-mile out was exciting,” she recalls. “It was kind of mind-boggling to think a whale would come to where people were.”

From their first panga outing in the lagoon, Cat and Carrie were hooked.

“I think the thing that really captured me was having a whale come up close and look at you eye to eye — you knew they were looking right at you — that connection was heart-stopping. That they would let you touch them, they would stick around, that they seemed to enjoy it — I couldn’t really wrap my mind around it,” Carrie reflects.

Spellbound, they went back again in 2005, 2006 and 2008. But their time among the whales would take on even greater significance when Cat learned in November of 2008 that she had ovarian cancer. She missed a year during chemotherapy in 2009 but returned with Carrie when she had barely enough stamina to travel in 2010.

“When I prepared for surgery, my safe place where I would go in my mind is the laguna, with the whales,” Cat recalls.

“I’m not a religious person, but if I’ve had an experience of God, it’s in the eye of a whale.”

They credit the outstanding guides they have had for enhancing an already superlative nature encounter and raising their awareness of how important their presence and travel dollars were in protecting the whales’ environment and that of the local fishermen. Raul, then Kuyima camp manager and now head of the ejido, was their very first, and they’ve since come to know many of the camp staff well.

“At the time we first came, the community was trying to fight off the Mitsubishi salt plant, fighting development in the lagoon…A big part of the appeal for us was not only the experience of the whales, but the passion that the people at the camp have for sharing that.”

That’s what keeps them coming back, says Cat. “It was the whales, but it was also the people.” She and Carrie reminisce about the final night of their trip when they returned after Cat’s cancer surgery in 2010. While they didn’t meet any “friendlies” on that trip (though there was an abundance of other wildlife, including sea lions, dolphins and sea birds), their group enjoyed a festive finale to their trip with a “wild musical soiree” in the dining palapa.

Carlos Varela, who is a professional singer and musician during the rest of the year when he is not working at the whale camp, and his then-wife Theresa – also a singer, and founder of a local women’s craft cooperative – put on a fabulous evening of entertainment that bound the staff and travelers tightly together in the joy of all they had shared the previous few days.

Ironically, however, while Cat has returned to commune with the whales, Theresa lost her life to cancer in the intervening year.

Coming to San Ignacio is an experience that is rich with emotion for Cat and Carrie. Permeating it all are the magical encounters with the whales, which seem to soothe and heal in the face of threat and grief.

Cat tries to capture that potency in words: “It’s somewhat addictive in that you want to have that contact again and again — not only with a mammal, but a huge mammal. We’re on land and they’re in water, and yet you feel so connected. The energy merges.”

“That idea of connection without words is so amazing,” Carrie adds. “The couple of whales that stayed with us, their whole bodies were visible. We watched them torque in the water, feeling that sense of power, but also their gentleness.”

Seems like our species could learn a few things from the way the whales behave toward us. 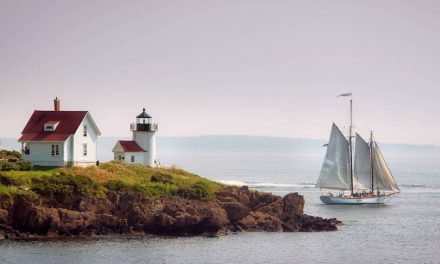 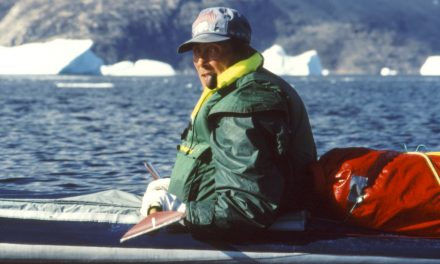 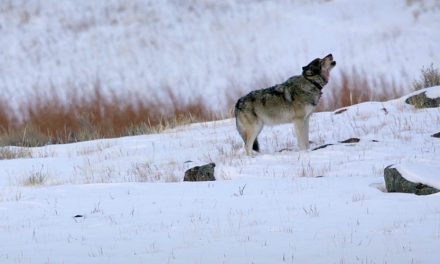 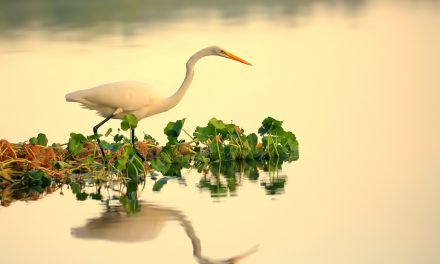