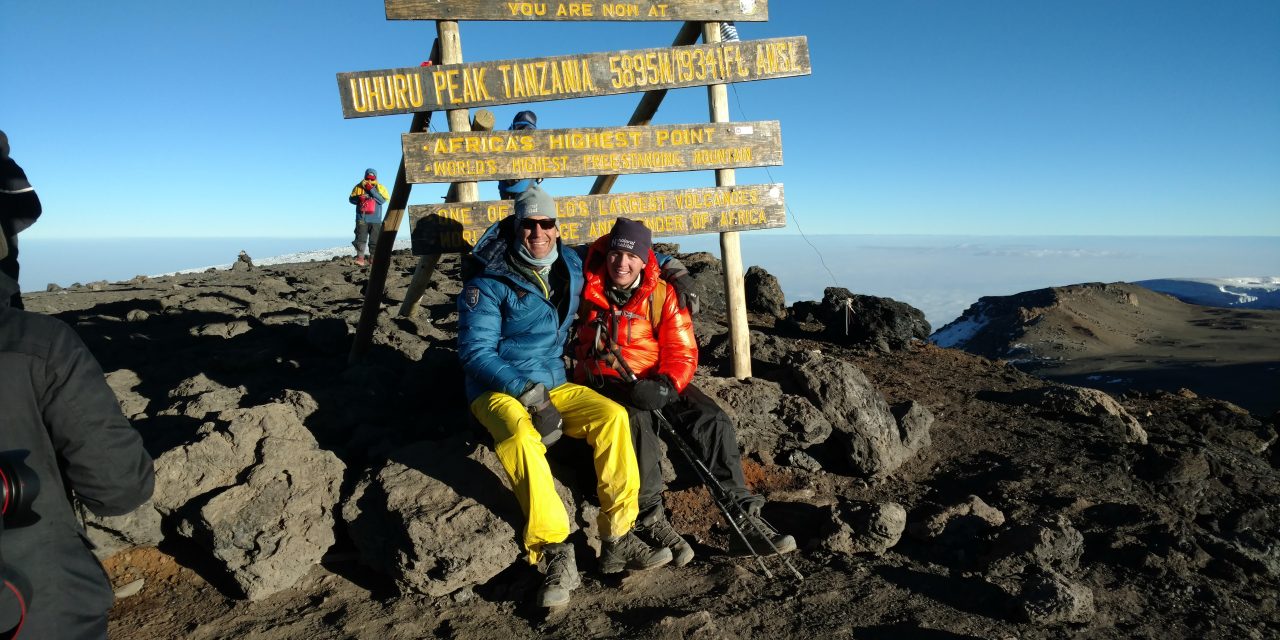 To celebrate his son Finlay’s graduation from high school, Ben Bressler, founder and president of Natural Habitat Adventures, planned a trip a little out of the ordinary for most 18-year-olds and their 54-year-old dads. They went to Tanzania to climb Kilimanjaro, the highest mountain in Africa.

At 6 AM on August 10, Ben emailed this photo and message to the office back in Boulder, Colorado:

Then, 24 hours later, this update came:

Sorry for the radio silence since 6:00am yesterday when I emailed you from Stella Point, about 500 vertical feet short of the summit (it turns out it was 600 feet short, but I couldn’t calculate at that altitude). I think I said the rest of the climb will be a “piece of cake.” Well, I don’t know what kind of cake I was thinking about—perhaps it was “pound (me in the head with a friggin’ sledge hammer) cake”—but about 30 feet after departing from Stella Point, I fell apart.

We started off at midnight at 15,500 feet, and I felt great for the first few hours, slowly passing groups as we zigzagged our way up the volcanic switchbacks. I even commented, “Wow, I feel great!” like 50 times (I tend to repeat things—poor Finlay). But at about 17,500 feet I started getting wobbly and slowed down a bit. Finlay changed up positions to hike behind me, which I figured was in order to catch me from sliding off a cliff, but later I considered that after living in a tent with his dad for seven days, he might have moved behind me in order to give me an extra push off that cliff in case my stumble wasn’t a sufficient launch.

Anyway, I had been “wobbly” since 3:30 or 4:00 AM, and Stella Point was a milestone that tells climbers, “You’re almost there—you go, girl!” In my head I was nearly there. A quick drink of tea and a bite of an energy bar and we were off on the quick finale to Uhuru Peak. But my “wobbly” turned to shuffle, and my shuffle turned to stumble, and my words turned to mush, and things weren’t looking too good for me. From the point to the peak is just one mile, along the rim of the crater with spectacular sunrise views of mountains and glaciers, and compared with the terrain we had covered over the last six hours, the trail was pretty damn flat. I expected it should take 30-45 minutes to cover it.

But it turned out to be not so flat for me, and Finlay had to coax me along as I shuffled and mumbled, and stopped (repeatedly) to bend over on my hiking poles or to dry-heave toward the side of the trail. The guides offered to support me by allowing me to finish the climb while holding onto their shoulders, but even in that miserable state, taking six-inch steps at 19,000+ feet, I would rather die right then and there than to accept their support—not because of pride, but because of the endless garbage my wise-ass son would have given me if I had to lean on the guides to get across the finish line.

I’m guessing if all goes well, I have a good 30-40 years left on this planet, and hopefully I’ll get to see him frequently during those years. Do I really want the first thing I hear from him every time I see him to be, “Dad, do you remember when we went to Kilimanjaro and our guides carried you to the peak?” Not worth it. I’d have rather fallen into the caldera.

Anyway, we made it. It was tough going for me, as our VP of Marketing and Kili summiteer Ted Martens warned me it would be. Emily Cottingham, a Nat Hab Adventure Specialist who used to work with Summits Africa and helped set up our climb, was more encouraging—she told me I’d be “fine.” And Dave van Smeerdijk, one of our Africa operations partners, told me it’d be fair dinkum or some Australian nonsense.

The seven hours downhill to our final camp was no walk in the woods (I’ll never use “piece of cake” again!), but this climb was among the most amazing things I’ve ever done in my life—the parts of it that I can remember, anyway. And I can honestly say that I would not have made it had it not been for Finlay (who felt 100-percent fine), whose offer to turn around with me and head back down the mountain contained just enough encouragement to make sure I went forward instead of backwards.

We’re in Arusha now. I’m getting a massage tomorrow. 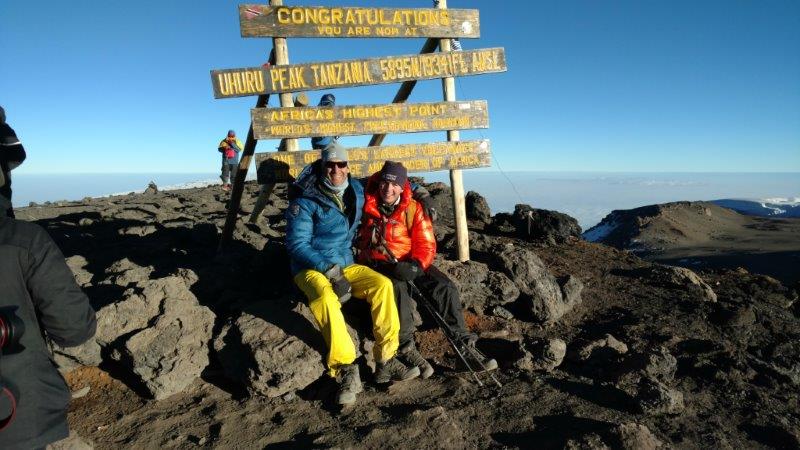 
You might be forgiven for thinking that summiting the 19,341-foot peak is all in a day’s work for the head of an adventure travel company and a son who’s traveled the globe in his dad’s shadow. But these two tackled the snowcapped dormant volcano with a few extra infirmities.

When Finlay was 14, he had a nasty accident playing soccer, simultaneously tearing his ACL and meniscus. He’s since had five major surgeries on his knee to repair the damage and deal with ensuing complications. A sixth involving a bone graft is in store, since he no longer has any cartilage or meniscus left. And Ben has had his own share of orthopedic setbacks, dealing with years of chronic back pain from degenerating discs in his spine.

“The reality is Ben doesn’t even like hiking,” his wife, Laura Bressler, revealed. “He did it for Finlay.”

Plans for the grand adventure took root five years ago when Finlay was in 8th grade. At school, he learned about Africa’s water crisis, an issue that moved his heart. He set out to raise $1,500 to buy a well for an African village through The Water Project, a nonprofit that provides access to clean, safe and reliable drinking water across sub-Saharan Africa.

Finlay made his goal by hitting up his middle-school classmates to purchase food donated by local companies: pizza slices from Domino’s, $5 box lunches from Whole Foods, and chocolate bars. When he told his dad he hoped to go to Tanzania to see the place where people had benefited from his efforts, Ben made plans to take him the following year, and to tack on the Kilimanjaro climb.

Finlay’s accident and subsequent string of surgeries delayed that goal till now. Wearing a knee brace, he attained the summit with ease, providing just the youthful vigor his doddering dad needed to save face (even while trashing his joints) and look down upon the wildlife-filled plains far below.

Though no one knows for sure what the mountain’s name means, Ben says the English translation of Kilimanjaro is clear: “Kicked my butt big-time.” 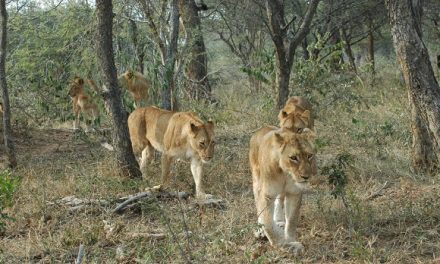 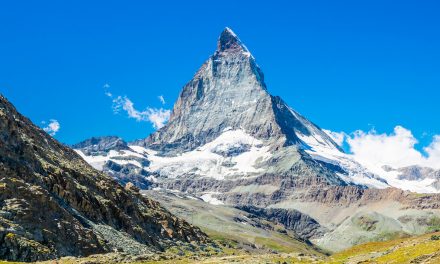 A Day in Zermatt, Switzerland 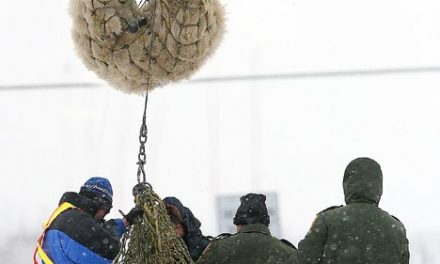 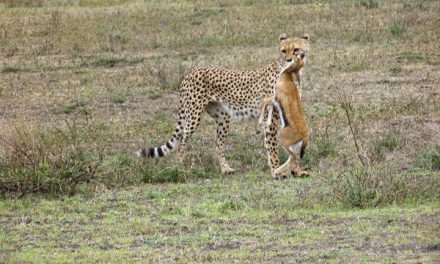