A new study shows that a species we thought was already adapted to the heat—the African wild dog—will suffer greatly from climate change and a warming world. ©Court Whelan

Polar bears struggling to find the ice floes they need for hunting and survival became the icon of climate change and our rapidly warming planet decades ago. And we’ve often heard how hotter temperatures are affecting the globe’s north and south poles and their oceans.

But now, a new study is among the first to document the impacts that increased heat is having on an animal we thought was already well adapted to high temperatures: the African wild dog (Lycaon pictus). Research shows that it’s becoming too hot for this carnivore to hunt, and the number of pups that survive is plummeting.

This represents a major shift in how we’ll have to think about climate change and the now probably unstoppable ramifications it will inflict on every cold- and heat-adapted species on Earth.

Africa will be feeling the heat even more

On May 12, 2016, an article published in the science journal Environmental Research Letters stated that in the near future, Africa is likely to experience more frequent, intense and widespread heat waves. High heat that would be considered unusual today could become a yearly occurrence there by the middle of the century.

Another study, published a week later, concluded that because the tropics have less variation in their day-to-day and season-to-season temperatures, the warming trend will emerge earlier there than it will in more temperate areas. That means that fewer carbon dioxide emissions will be needed to see an increase in the number of extremely hot days for the poorest fifth of the world’s population than for the wealthiest fifth. Among the regions that will suffer the most will be West Africa and the Horn of Africa. And even though people living in tropical areas are more adapted to hot temperatures than those in more temperate climes, there is a limit to the human body’s tolerance for heat.

This research emphasizes the undue burden that some of the poorest people on the planet—often those that have contributed the least to global warming—and some of the world’s most vulnerable animals to poaching and habitat destruction will face from climate change.

The African wild dog is far from alone in losing more than 90 percent of its historic range: cheetahs share the same fate. ©Joe Charleson

Animals that are heat-adapted will suffer no less

World Wildlife Fund estimates that only 6,600 African wild dogs remain in the wild. They are endangered, largely due to infectious disease, direct conflict with humans and habitat loss—93 percent of their historic ranges. Wild dogs live in packs of approximately 10 to more than 40 animals, and they work together to hunt down prey species, such as gazelles and impalas.

What is shocking about the results of the new study, conducted by scientists from the Zoological Society of London in conjunction with the University of Johannesburg and Botswana Predator Conservation Trust, is that what is known about the biology and ecology of African wild dogs suggests that they should be somewhat impervious to the kinds of changes expected to occur as our planet warms. Other than their relatively low numbers, African wild dogs don’t exhibit traits often associated with susceptibility to climate change: they exist in diverse habitats, they reside in more than 386,000 square miles over a broad geographic range and they aren’t picky eaters. They also have a great capacity for quickly producing pups.

The wild dogs tend to leave their young in dens when they set off for their early-morning and late-evening hunts, thus avoiding the worst heat of the day. Running around very fast after impalas causes the dogs to get extremely hot. Now, because of rising temperatures, there are not enough hours in the day that are cool enough for the dogs to do that. Scientists found that in Botswana, Kenya and Zimbabwe, both the time the dogs were able to be active and the survival rate of pups has been cut in half.

Living and working in packs of 10 to 40 animals, wild dogs hunt prey species such as gazelles and impalas. ©Ryan Kilpatrick, flickr

For example, in Botswana, the research team found the average number of pups surviving to a year old in each litter fell from 5.1 between 1989 and 2000 to 3.3 between 2001 and 2012, with peak temperatures rising 1.1 degrees Celsius between the two periods. In Kenya, a 1 degree Celsius rise in the peak temperature cut yearlings by 31 percent and in Zimbabwe by 14 percent.

While the scientists were not able to conclusively demonstrate that the reduction in hunting is to blame for faltering reproductive success, it seems reasonable that having less food to go around could potentially lead to the pups’ starvation. The dogs may also feel forced to hunt when they otherwise wouldn’t, leaving their young vulnerable to predators; and desperate, hungry animals could be taking greater risks for their meals, increasing their own chances of mortality. Or, higher temperatures might be having more direct impacts on the animals; in other species, higher temperatures have been shown to reduce milk output and quality.

Other recent research on animals normally tolerant of heart is corroborating the findings of the African wild dog report. In July 2017, a paper published in Biology Letters showed that burrowing and predominantly nocturnal aardvarks in the Kalahari Desert—one of sub-Saharan Africa’s most successful insect-eaters and essential ecosystem engineers—died of starvation during a particularly arid spell. The scientists wrote: “With climate change predicted to increase the frequency and duration of droughts, aardvarks may be [eliminated] from much of their current range.”

Adult wild dogs hunt in the early morning and late evening, when it is the coolest. ©Court Whelan

Sadly, if you’re an animal living in an already hot place that’s getting hotter, there may not be time or any more ways for you to adapt to ensure your survival. While polar bears struggle to find new foods in the North, wild dogs at the equator are having trouble just finding the energy to move around.

That’s notable, for it shows that it won’t only be polar bears that will have to scramble and struggle with rapid climate change. Not even the most heat-tolerant among us will be spared. 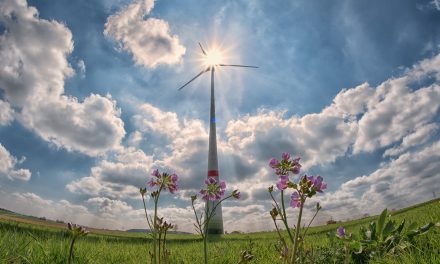