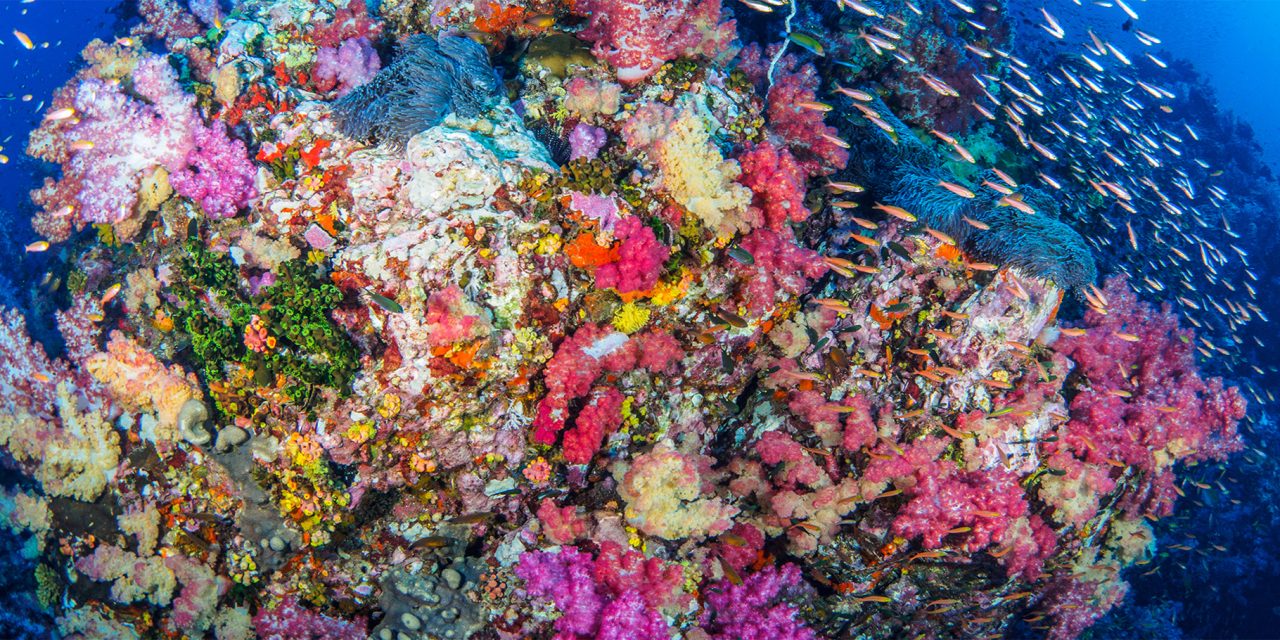 Across the world, there are about six thousand coral species. Some species grow in warm shallow waters near coastlines, and others thrive on the dark, cold seafloor of the open ocean. Coral reefs are often referred to as the “rainforests of the sea” as they provide food and habitat for about 25% of all marine species. Coral reefs are biodiversity hotspots that are often key indicators of overall ocean health.

Almost all corals are colonial organisms. They are composed of hundreds to thousands of individual animals, called polyps. Most reef-building corals contain photosynthetic algae, called zooxanthellae, that live in their tissues. The corals and algae have a symbiotic relationship. These algae help the coral remove wastes and supply the coral with glucose, glycerol and amino acids. Oxygen is also produced during the algae’s photosynthesis. The algae are responsible for giving corals their often bright color.

Coral reefs have become increasingly threatened due to challenges such as habitat destruction, overfishing, pollution, cyclones and climate change. Rising global temperatures, due to human-driven climate change, cause warmer water temperatures. Warmer temperatures increase the frequency of mass bleaching events and make disease outbreaks more common. Coral bleaching happens when a stressor, like warmer temperatures, causes the zooxanthellae algae to flee the coral. When the algae leave, corals no longer have consistent nutrition and lose their vibrant colors, resulting in their distinctive “bleached” appearance. Mass bleaching events in 2016 and 2017 killed off half of the living coral on Earth. Thankfully, coral reefs are living organisms and can be resilient…under the right conditions.

Coral reefs are arguably some of Earth’s most important animals. Yes, animals! Coral reefs are special in that they are a direct food source for a variety of marine creatures. Coral structures themselves provide shelter for animals, helping sustain the food chain and the overall health of the ocean. An estimated 850 million people live within 62 miles of coastal reefs around the world, and more than 500 million depend on reef fish for food and livelihoods. Coral reefs generate $30-$375 billion a year annually worldwide due to tourism, fisheries and medicine. In the Great Barrier Reef, (located in the Coral Sea, off the coast of Queensland, Australia), the entire ecosystem has about 150 inshore mangrove islands and seagrass that capture carbon and protect the coastline from storms and wave erosion.

On September 8, 2021, the Allen Coral Atlas met a major milestone by completing the first-ever high-resolution spatial and thematic detailed maps of the world’s tropical, shallow coral reefs. This work is the result of a partnership between Arizona State University’s Center for Global Discovery and Conservation Science, Planet, the Coral Reef Alliance, the University of Queensland and Vulcan Inc.

The Allen Coral Atlas monitoring system detects variations in reef brightness using high-resolution satellite imagery, which helps indicate whether reefs are under stress caused by marine heatwaves. This tool will be integral for coral restoration efforts, ridge to reef research, strategic conservation planning, community engagement and marine policy. This tool is user-friendly, and learners of all ages can engage with this geospatial data and visualization. Anyone can access the tool and use it to see where corals are bleaching at a global scale and in bi-weekly increments.

Satellite mapping provides a lot of benefits for conservation and coral ecology experts. Before the Allen Coral Atlas, scientists and conservationists had limited access to data and tools that would help determine the exact location of coral habitats. Field-based methods are valuable when creating local and regional maps, but costly for large-scale conservation efforts. Now, coral researchers have accessible visual references that will support global and regional monitoring and response efforts. Timely, accessible data like this will help conservationists, governments and local communities effectively craft conservation and restoration interventions.

The Great Barrier Reef is the Largest Living Structure on Earth!

The Great Barrier Reef is actually not a single reef, but a reef system, comprising almost 3,000 individual reefs covering a total area of approximately 133,000 square miles. It is the largest living structure on Earth! The Great Barrier Reef supports over 1,500 species of fish, six species of endangered sea turtles, dozens of whale and dolphin species, 4,000 types of mollusks. and hundreds of species of coral. There are more than 400 shark species in the world, and about 50 of them can be found along the Queensland coast.  In addition to its 3,000 coral reefs, there are 600 continental islands, 300 coral cays and about 150 inshore mangrove islands.

There are eight living icons that showcase the incredible complexity of marine life in the Great Barrier Reef. Clownfish, whales, manta rays, sharks, turtles, potato cod, giant clams and the Maori wrasse are known as the “Great Eight”.

The reefs around Cairns and Lady Elliot Island provide the most exclusive access to the Great Barrier reefs extraordinary marine diversity. Lady Elliot Island is directly located at the southern tip of the Great Barrier Reef World Heritage Site. Lady Elliot is a coral cay lying within the reef’s most highly protected Green Zone, and is a sanctuary for over 1,200 species of marine life. The island is most known for its abundance of manta rays, turtles and unspoiled coral reefs. On the northern end of the reef system is Cairns, which marks the convergence of the Great Barrier Reef and Daintree National Park. The reef around Cairns is perfect for sighting the showy giant clams. Giant clams grow up to almost 5 feet in length and can weigh up to 440 pounds. It’s said that, like a human fingerprint, no two clams have the same mantle pattern or colors.

The best way to see some of these marine animals in their natural environment is by joining the world’s finest naturalist guides in Australia’s wildest places.

The Coral Reef Rescue Initiative is composed of major partners and collaborators of the Allen Coral Atlas. This initiative is led by World Wildlife Fund and seeks to help conserve the world’s rapidly deteriorating tropical coral reefs by partnering with global south countries to help rescue and regenerate the world’s most climate-resilient reefs. As the worldwide travel partner to WWF, Natural Habitat Adventures is proud to offer a fully carbon-neutral travel opportunity to explore the most diverse marine ecosystems on Earth.

On a Nat Hab tour of Australia North: Kakadu, Daintree & the Great Barrier Reef, you will be able to explore the coast of the Coral Sea, and get a rare glimpse into one of the world’s most diverse hotspots.  On our Nat Hab expedition, we spend several days on Lady Elliot Island, an optimal base from which to explore the wonders of the Great Barrier Reef. The sole accommodation on this island is an award-winning, family-run ecolodge focused on reef health and environmental sustainability. Between November and February, within this protected sanctuary, visitors can scuba or snorkel directly from the hotel to see sea turtles. You’ll likely catch a glimpse of the manta ray, with as many as 450 inquisitive rays congregating regularly. Lady Elliot Island is also home to the second-highest diversity of seabirds in the Great Barrier Reef. 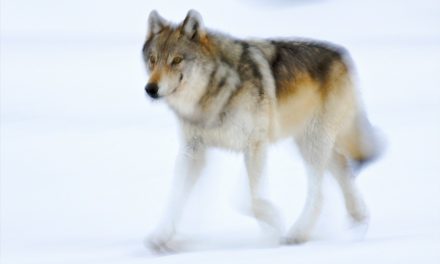 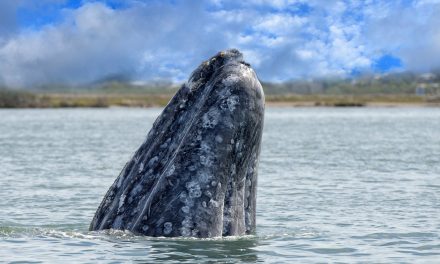 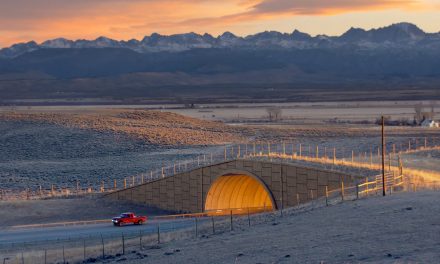 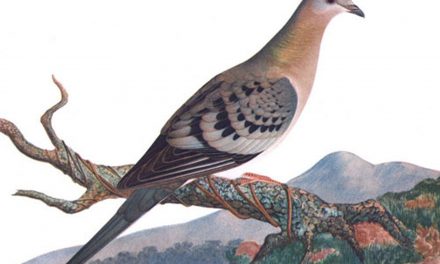