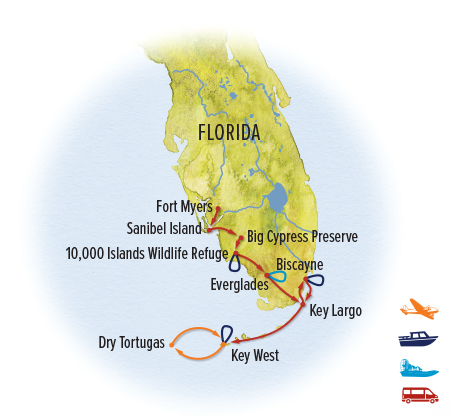 Day 1: Fort Myers, Florida / Sanibel Island
Arrive in Fort Myers, the jumping-off point for exploring southwest Florida’s wild Gulf Coast beaches, islands, marshes and wildlife reserves. From here, you'll make your way to Sanibel Island, connected by a causeway to the mainland. This is where our subtropical nature adventure begins, and you'll meet your Expedition Leader at a welcome dinner this evening.

Day 2: Sanibel Island—J.N. Ding Darling National Wildlife Refuge / Big Cypress National Preserve
Nearly half of Sanibel, a subtropical barrier island, is protected within the J.N. Ding Darling National Wildlife Refuge. The refuge is named for the pioneering conservationist who persuaded President Harry S. Truman to set aside more than 6,400 acres of pristine wildlife habitat in 1945 for at-risk species and migratory birds. Part of the largest undeveloped mangrove ecosystem in the U.S., it also comprises cordgrass marshes, seagrass beds and West Indian hardwood hammocks. World-famous for birdwatching, the refuge supports some 250 species of seabirds, shorebirds, marsh birds, raptors, songbirds and waterfowl. Osprey nesting peaks in March. On a scenic drive and guided hike, look for birds and other wildlife such as river otter, American alligator, endangered loggerhead turtles, and the rarely seen bobcat.

Continue this afternoon to Big Cypress National Preserve, protecting 729,000 acres of habitat that's home to the endangered Florida panther (elsewhere called puma, cougar or mountain lion). Fewer than 200 of these elusive cats remain in the swamps of South Florida, so it’s highly unlikely we’ll spy one, but it’s gratifying to walk within their native pine and hardwood habitat. Other mammals in the preserve include black bear, bobcat, white-tailed deer, Big Cypress fox, squirrels, nine-banded armadillos and coyotes, as well as 120 resident and migratory bird species. Some 700 plant species are also found within the preserve, from cypress and ancient live oaks to wet prairies blooming with wildflowers.

Day 3: Ten Thousand Islands—Mangrove Kayaking / Chartered Cruise in Rookery Bay
Begin the day with a peaceful morning kayak tour through the mangrove tunnels edging Rookery Bay, led by local biologist guides. Examine oyster reefs and mudflats teeming with life as we investigate this intricate ecosystem. After lunch, head back to the bay on a private boat tour to remote Keewaydin Island. The pristine beach flanking this wild barrier island is made of shells, not sand, which we notice as we look closely once we step ashore. Least terns and endangered loggerhead sea turtles use the 8-mile-long beach as a vital nesting ground. Accompanied by a biologist guide, look for gastropods, bivalves, crustaceans, corals, sea squirts, snails, sponges, fishes, birds, reptiles and more.

The island is part of Rookery Bay National Estuarine Research Reserve, which protects native wildlife and habitat while providing a wilderness immersion for visitors. The 110,000-acre reserve, along with the adjacent Ten Thousand Islands National Wildlife Refuge, is part of a matrix of protected areas conserving vast wild tracts of southwest Florida, including 232 square miles of mangrove forest. Mangrove systems provide sheltered and nutrient-rich nursery grounds for young fish, crustaceans and mollusks. Clams, shrimp and many fish feed in the mangroves and live among the complex root systems. Notable species in the region include the Florida manatee, peregrine falcon and wood stork, as well as green, loggerhead and Kemp's ridley sea turtles.

Drive east across the Everglades today on two-lane Highway 41, the scenic Tamiami Trail. As we traverse Big Cypress National Preserve, look for great blue herons and white egrets in the marsh grasses and alligators sunning in the channels alongside the road. An exciting adventure awaits on a private airboat ride through the “river of grass.” This water-based safari offers a chance to see scores of the Everglades' 300 resident bird species, plus up-close views of gators, crocodiles, otters and other wildlife in a truly wild setting far from touristic trappings. The Everglades are the largest subtropical wilderness area in the U.S., a vast mosaic of varied ecosystems sprawling over 1.5 million acres of the lower Florida peninsula. Due to the unique nature of their formation and endemic flora and fauna found nowhere else, Everglades National Park also holds global status, with the ecosystem designated as a World Heritage Site, International Biosphere Reserve and Wetland of International Importance. As we continue into the national park, we stop at a park visitor center for an interpretive experience and explore the wild environment further on foot. Then it's on to Key Largo to spend the next two nights.

Day 5: Key Largo / Snorkel & Paddle in Biscayne National Park
Our discovery of the Florida Keys launches from Key Largo, first in the 113-mile-long chain of coral and limestone islands that extends southwest from the bottom of Florida peninsula, dividing the Gulf of Mexico from the Atlantic Ocean. "Key" is derived from the Spanish word cayo, meaning small island. With tropical hardwoods, winding creeks and palm-fringed beaches, Key Largo holds some of the best botanical scenery in the state. Offshore, the rich undersea world is protected within the Florida Keys National Marine Sanctuary, which encompasses 2,900 square nautical miles and contains the only living coral reef in the continental United States.

Just north lies Biscayne National Park, 95% of which is water, and it’s the focus of our all-day marine adventure. Set out in a private speedboat to reach our destination, then don snorkeling gear to explore the crystal-clear sea, keeping an eye out for dolphins, rays and sea turtles. More than 600 fish species have been identified in the park's aquamarine waters, and we’re sure to see a veritable kaleidoscope of them as we swim among the coral. In the mangrove-fringed waters of placid Jones Lagoon, paddle a kayak or stand-up paddleboard in shallow water as we look for baby sharks, turtles and the rare roseate spoonbill on a guided excursion. We also go ashore to visit Boca Chita Island or Adams Key.

Day 6: National Key Deer Refuge / Private Dolphin Cruise / Key West
Today we make our way down the chain of isles to Key West via 42 bridges, the longest of which spans seven miles. The Keys were long accessible only by water until Henry Flagler extended his Florida East Coast Railway down to Key West in the 1910s with an ambitious series of oversea trestles. The highway opened in 1938. We stop at the National Key Deer Refuge, a 9,200-acre reserve that protects this endangered species found only in the lower Florida Keys. The smallest sub-species of North American white-tailed deer, only a few dozen Key deer remained by the 1950s, but conservation efforts have helped the population rebound to nearly a thousand since. On a visit to the Nature Center on Big Pine Key, learn about Key deer and 15 other endangered species protected within the refuge.

Ultimately we reach the end of the line at Key West, where we board a private dolphin watch cruise through Key West National Wildlife Refuge, established in 1908 by Teddy Roosevelt. Our biologist-owned ecotour operator is dedicated to sustainability, and we’ll ride on the first lithium ion battery solar-powered electric boat, custom-built to ensure a low-impact experience with wildlife. Aboard Squid, look for playful bottlenose dolphins, which congregate in the shallow, warm waters of the lower keys. In the clear depths we may also see barracuda, stingrays, turtles, small bonnethead sharks, conchs and sponge gardens. The sky overhead holds great white herons, ospreys, frigates and pelicans among the 250 bird species in the refuge. Enjoy the sunset aboard, then return to Key West for dinner and two nights at our boutique inn in the heart of the historic district.

Day 7: Key West / Seaplane to Dry Tortugas National Park
Enjoy a free morning to explore Key West's colorful Old Town at your leisure. Don't miss Ernest Hemingway's house, now a museum, where the author lived during most of the 1930s. Scale the steel spiral staircase to the top of the Key West Lighthouse, erected in 1825, for a gull's-eye view of the historic quarter. And walk to the Southernmost Point, where you'll be just 90 miles from Cuba, whose Caribbean heritage, culture and cuisine are pervasive in the Keys and southern Florida.

Gather for a final adventure as we board a seaplane to fly to Dry Tortugas National Park. Our narrated low-altitude flight offers an exciting perspective on the clear waters beneath us, and we're close enough to spot sharks, dolphins and shipwrecks below. In just 40 minutes (versus a 2-1/4-hour ferry ride), we land at Garden Key, second largest of the seven small islands that comprise the Dry Tortugas. The 100-square-mile national park is mostly open water, and we expect excellent snorkeling over pristine coral reefs in sheltered seas. Ashore, tour Fort Jefferson, the massive unfinished coastal fortress built in the 1840s. Placed strategically to capitalize on the Tortugas' location along one the world’s busiest shipping lanes, the fort was intended as a vital link in a chain of coastal forts. The fort was abandoned by the Army in 1874, and while it was used briefly during both World Wars, its final chapter as “Guardian of the Gulf” had long since ended. We fly back to Key West late this afternoon, in time to savor the famous sunset and cap our encounter with wild Florida at a farewell dinner tonight.

Please note: Our seaplane flight is weather-dependent. In the event we are unable to fly, we will do everything we can to provide a gratifying alternative experience that offers a unique experience of the Lower Keys.

Day 8: Key West / Depart
After breakfast, a transfer is provided to the nearby airport in Key West to meet departing flights. We recommend scheduling a morning departure if you will be making connections en route home.