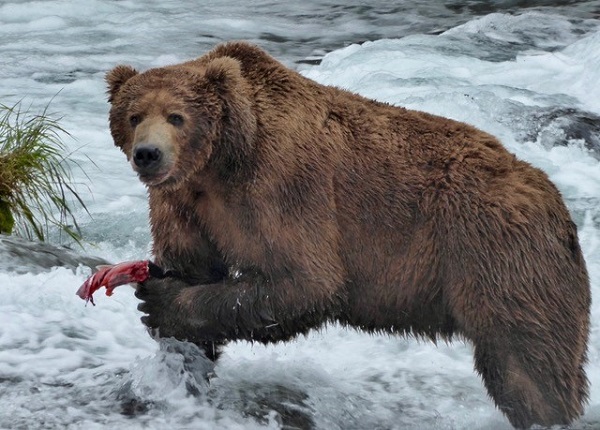 “Our two-week wildlife tour in Alaska was one of the best trips ever, filled with close viewing of grizzly bears, orca and humpback whales, puffins, moose, sea otters, dall sheep, mountain goats, an amazing variety of wildflowers, and spectacular glaciers and icebergs. Our group consisted of 13 guests led by an Alaskan guide with expertise in bears and herding us. We stayed in remote lodges 90 miles inside Denali, on Fox Island off coast from Seward, and in Katmai National Park, which is grizzly bear heaven southwest of Anchorage. In between these rustic surrounds, we enjoyed hotels in more civilized Talkeetna, Fairbanks and Anchorage.

The food was delicious! We love fresh fish, and relished eating it every day. Salmon, halibut and crab—yum! Also loved the 19-plus hours of sunlight each day. It really never got dark; instead it was dusk between about midnight and 4 a.m. Many of the photos below were taken after 10 p.m. and almost all using my trusty simple and compact iPhone.

Our group (minus one fella that got sick). Our knowledgeable guide, Samantha McNearney, is on the far right in blue.

Remote lodgings in Kantishna, 90 miles west of the Denali Park entrance and 25 miles from the base of 20,000-foot high Denali.

Inside Denali National Park. No moose in this shot, but wetlands like this are their favorite habitat. Amazingly, we had almost no insects.

Only 30 percent of Denali National Park tourists manage to see Denali peak, which creates its own cloud cover.

View from a six-passenger, single-prop plane we took to leave the remote Denali lodge. We got to the lodge via a bus on a 90-mile dirt road. Although that was pretty with wildlife viewing, the small plane ride back to civilization was also amazing with its views of the majestic geology of the Alaskan mountain ranges.

One of the many retreating glaciers. Although smaller than before, the glaciers are huge. This photo was also taken from the small plane out of Denali.

Note the relatively small summit success rate. When we were there, a woman summited the peak in only 21 hours—third fastest ever for either a man or woman. Most climbers take two weeks to summit. There are usually less than five deaths per season (way fewer than Everest). Most deaths are due to altitude sickness and some due to falling into deep crevasses.

We did some hiking. Definitely heeded the warning on this sign—avalanche artillery!

Himalayan poppies outside of Alyeska Resort, one of our most luxurious abodes.

Rafting near Alyeska on Spencer Lake and then down to Placer River. Access to the put-in and take-out sites is only via Alaska Railroad. The background iceberg calved recently from one of the feeder glaciers.

The main lodge/dining room on Fox Island, a one-hour boat ride from the town of Seward. The gourmet morsels here were amazing, and we got a cooking lesson—for salmon, of course!

Whale and bird watching from a small boat cruise. Did not get any photos of the breaching whales. Smartphone cameras, and their operators, have limitations. Three-foot waves with a prediction for higher ones kept us inside a huge inlet, away from the open sea. Everything is huge in Alaska!

A puffin. There were a lot of them, along with a zillion other birds far beyond my naming expertise. Wonderful to see thriving bald eagles in profusion.

Another puffin. Definitely my favorite bird because of its colors, the fact that they are big enough and slow enough for me to spot, and because they are hilarious when they flap and tumble wildly on the water’s surface to clean their feathers.

Float plane to Katmai grizzly territory for three days. Katmai is about 250 miles southwest of Anchorage and is accessible only by boat or plane.

View from the float plane. The Bering Strait area is flat. Like most of Alaska, permafrost stunts the size of vegetation. Most trees are limited to only 20 feet in height. A beetle is now killing many cedars as part of a cycle that has occurred many times in the past.

The two of us with grizzlies fishing at Brooks Falls. Flying biting varmints this night, which inspired my head netting. John claims he is insect-resistant due to his Winnipeg heritage.

When guests arrive at Katmai, they are immediately steered into bear school to learn how to behave so that there continues to be a peaceful coexistence between bears and humans. This is possible because the grizzlies are focused on fattening up on the salmon run, and watching out for more dominant bears. It is also because humans are forbidden to carry food outside their cabins, and told NEVER to run.

Large numbers of grizzlies migrate to Brooks Falls each summer when the salmon run. Visitors view the falls from an elevated wooden platform (which the bears like to sharpen their teeth on). Viewed from the platforms, and during encounters on the 1.2-mile hiking trail between the cabins and the falls, the bears are very close but pay almost no attention to the human gawkers. At bear school, we learned to travel in groups, make noise to communicate we are humans, stand our ground, and never turn our backs to approaching bears.

When our float plane first arrived at Katmai, John was on the beach waiting for my plane to arrive and did not notice a grizzly walking toward him. Eventually, the rangers alerted John to move (after I had a minor heart attack!). Rangers monitor bear-human contact by use of radios to halt hikers from where bears have been spotted; if the rangers had guns, we never saw guns and got the idea guns are never used.

Two one-year-old bear cubs waiting for mama bear to come back with a sockeye salmon to eat.

This is one of the alpha males weighing around 1,000 pounds. Cubs’ main cause of death is mauling by adult males, so moms nervously and constantly watch for big males and give them a wide berth.

Newborn bears weigh only one pound, and are born during the winter in hibernation. They usually stay with their moms for about two years. Very young cubs are dark brown and then change to a blondish coat after one season.

Each bear has his/her own unique fishing technique. Some belly dive into the bubbling water. Others poke their snouts under the water to spy and snare a fish. Some catch the fish in mid-air as the fish jump up the falls. We saw one of the best fisher bears catch eight fat salmon in about 40 minutes. Fish average 5,000 calories each. The bears eat the whole fish when they are very hungry at the beginning of the season. Later, when they are fat and not so hungry, bears eat only the fatty skin and leave the remains for the birds.

Mama grizzly watching out for a more dominant female or a male while her cubs feast.

Four-person cabins at Katmai. We shared with a delightful couple from Austin and belly laughed to the point of tears as the top bunkers hoisted themselves up.

Inside the cozy cabin. Note the inside bathroom—quite a luxury in the outback.” 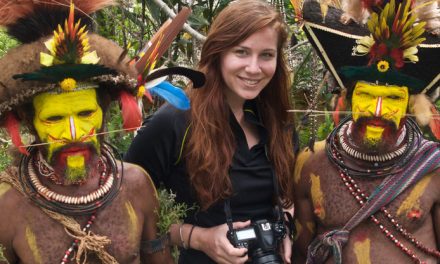 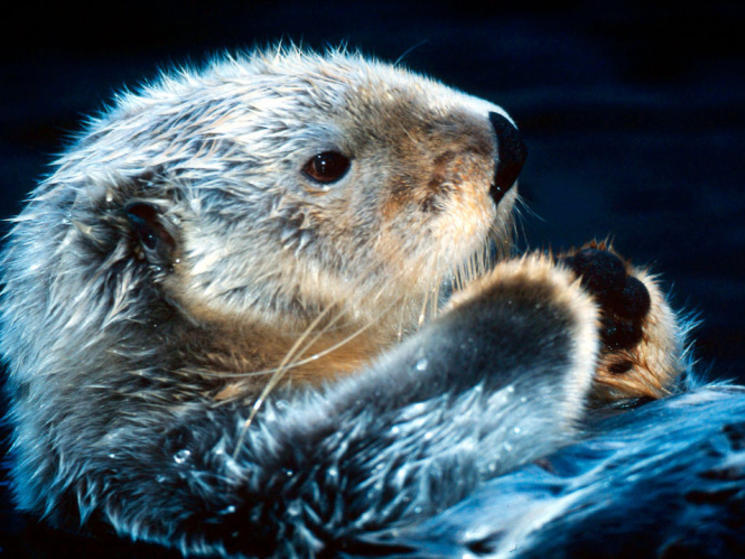 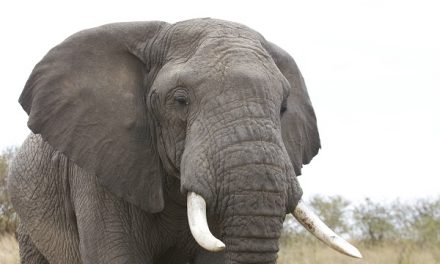 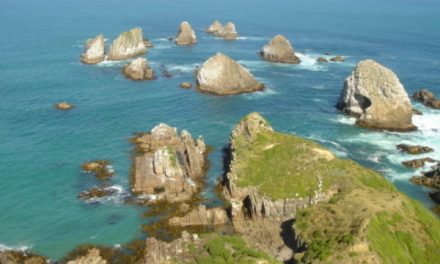