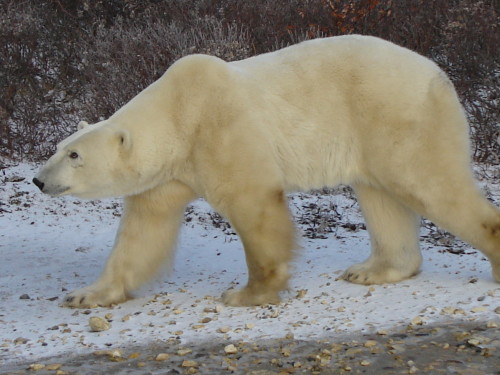 Seeing the polar bears is a magical experience that prompts joy, awe, and sometimes even poetry! On a recent Tundra Lodge & Town Adventure to experience the polar bears in Churchill, talented guest Cindy Tether wrote a beautiful poem describing her unforgettable vacation! We enjoyed Cindy’s poem and photographs so much that we had to share them with the rest of the Natural Habitat community:

ODE TO THE LAND OF THE POLAR BEAR

There’s a land up north where the polar bears roam,
Where the fox and the ptarmigan make their home.
It’s a land of seals and arctic hare ~
It’s the capital, too, of the polar bear!
It’s a land of falcons, raven and moose,
A land of lichen, willow and spruce.
It’s a land of wolves and caribou,
Of snowy owls and snow geese, too ~
A land of peat and lots of basalt,
But don’t blame me ‘cause it’s not my fault!
What is this land of rivers and lakes?
It’s Churchill, of course, for goodness sakes!
Into this land of black-bellied plovers,
We climbed aboard our Polar Rovers!
We started out in the lodge on the tundra,
And there we found bears ABUNDRA!
We watched them each and every day ~
We saw them dance. We saw them play;
We saw them roll. We saw them spar ~
Sometimes close…and sometimes far.
We saw them early. We saw them late.
We saw them underneath the grate!
With big, black eyes and furry feet,
Those bears of Churchill can’t be beat!
Back in town, we had lots of fun,
From early morn till the day was done.
From Rhonda, we learned about native plants
And every creature, except the ants!
From Myrtle, we learned about “teepee creeping,”
When all the other Cree are sleeping!
She captured our hearts, and we wanted to linger,
Until she started on Jerry Springer!
We bought her crafts of caribou hair ~
The finest small sculptures you’ll find anywhere!
With polar bear postmarks on our mail,
We headed next to the polar bear jail ~
And there we experienced one last gift,
As we stood in awe at the “polar bear lift”!
From Winnipeg lights to Hudson Bay,
Our trip was great in every way.
From the north to the south, from the east to the west,
Colby and Court are the best of the best!
So clap your hands and tip your hat ~
Hooray for NATURAL HABITAT!!! 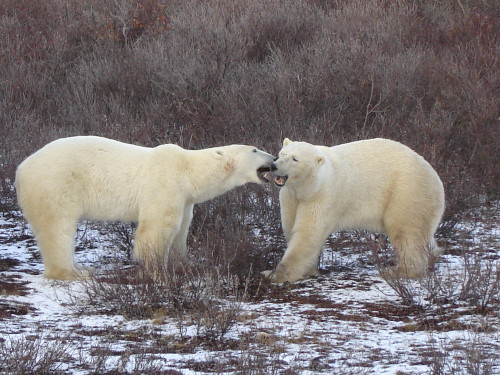 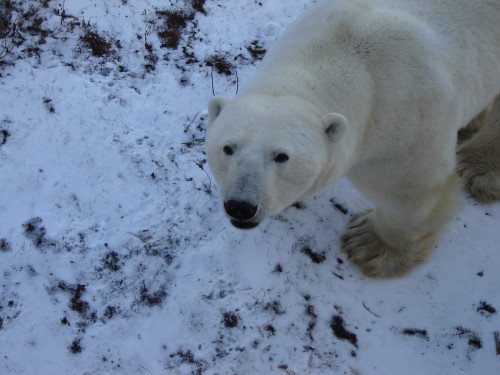 A close encounter with a polar bear from a Polar Rover. Photo: Cindy Tether

A polar bear walking across the tundra outside of Churchill, Manitoba. Photo: Cindy Tether 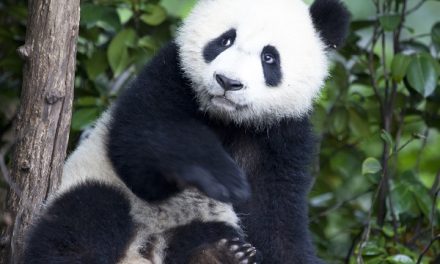 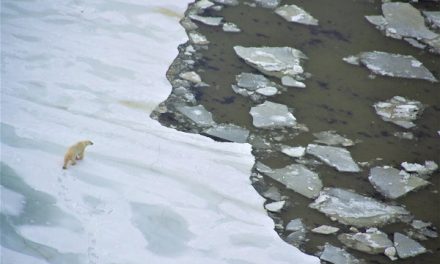 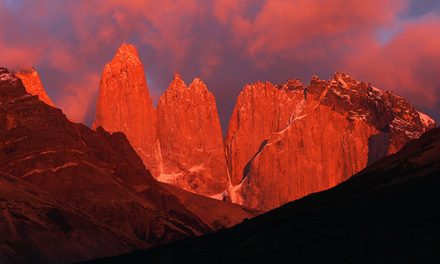 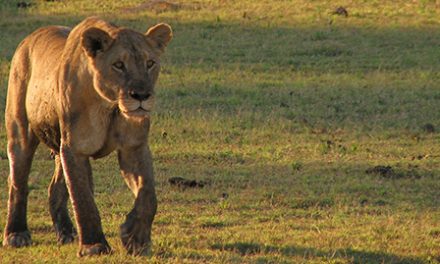