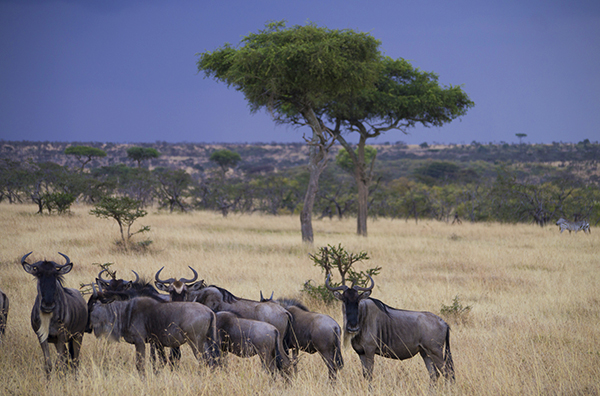 Imagine enormous herds of wildebeest and zebra the East African plains while predators follow in stealthy pursuit. It's something you've almost certainly seen on film, and now you can witness this dramatic event in person during the Great Migration. Here are some interesting facts you might not know about this amazing natural event and its star—the wildebeest.

1. No two years are ever the same. Each year, nearly 2 million wildebeest, zebra gazelle make a circular tour between the Serengeti in Tanzania and the Maasai Mara in Kenya in search of greener pastures. They make their annual trek north toward the Maasai Mara between July and October, but their exact movements and timing vary from year to year.

2. Water crossings are one of the most dangerous obstacles for wildebeest. Hippos and Nile crocodiles lay in wait at many river crossings. In addition to predators that take advantage of the water, hundreds of wildebeest may drown if they choose a time or spot to cross where the water is too high or fast. 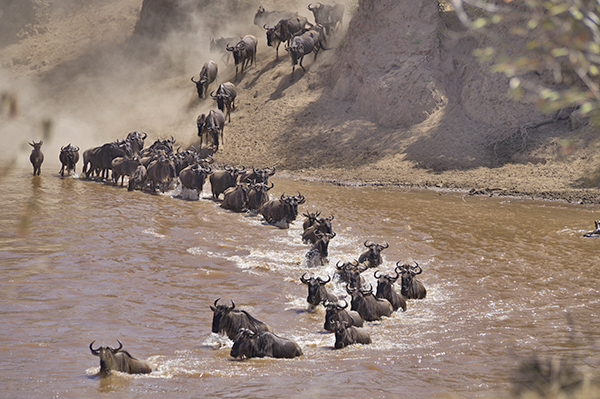 3. Wildebeest cows drop their young all at once. During a two- to three-week period in January and February, wildebeest cows give birth to some 300,000 to 400,000 calves. This provides a feast for predators such as hyenas and lions. However, because the predators quickly become satiated and are unable to consume as much as they would if the wildebeest birthing were spread out over more time, they have less of an overall impact on newborn calf populations.

4. Wildebeest calves are born to run. Newborn wildebeests, known for gaining coordination faster than other ungulates, get to their feet two to three minutes after birth and are able to run with the herd after just five minutes. Before long, they can even outrun a lion!

5. Wildebeest have built-in GPS. In March, when the short-grass plains of the southern Serengeti dry out, the wildebeest head west toward the Tanzania woodlands. There are two theories, or a combination of both, that likely how the wildebeest know where to go: they follow instinct (etched on their DNA after generations of survival and natural selection); or they respond to the weather, following the rains and the growth of new grass.

6. The Great Migration helps wildebeest stay alive. Though this massive seasonal movement is driven by the perpetual need for food, being constantly in motion helps wildebeest evade large numbers of predators, many of which can’t follow herds very far because they are territorial and/or have young depending on them. Learn more, and see the incredible wildebeest, the “Big Five” (lion, leopard, African elephant, Cape buffalo black rhinoceros)—plus other fascinating species such as zebra, giraffe, hyena, cheetah, eland and gazelle, on a Great Tanzania Migration Safari. 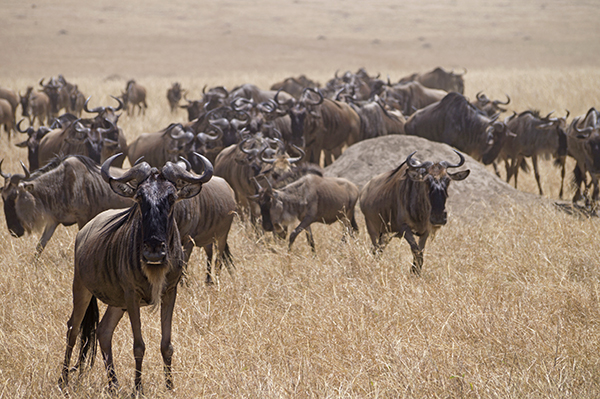 Witness one of nature's most exhilarating spectacles: thousands of wildebeest and zebra making their annual trek across the Serengeti! Itineraries custom-designed to follow the herds.

Experience one of the world's most incredible wildlife events in Africa's most classic safari destination—Kenya, home to the massive movement of creatures that is the Great Migration!

Get Weekly Updates
Our weekly eNewsletter highlights new adventures, exclusive offers, webinars, nature news, travel ideas, photography tips and more.
Request Your 2022 Catalog
View Our 2022 Digital Catalog
Send Us a Message
Use the form below to send us a comment or question.
Refer a Friend
Earn rewards for referring your friends! We'd like to thank our loyal travelers for spreading the word. Share your friend's address so we can send a catalog, and if your friend takes a trip as a first-time Nat Hab traveler, you'll receive a $250 Nat Hab gift card you can use toward a future trip or the purchase of Nat Hab gear. To refer a friend, just complete the form below or call us at 800-543-8917. It's that easy! See rules and fine print here
/articles/african-safaris/east-africa/six-facts-about-the-wildebeest-migration/
Physical Requirements