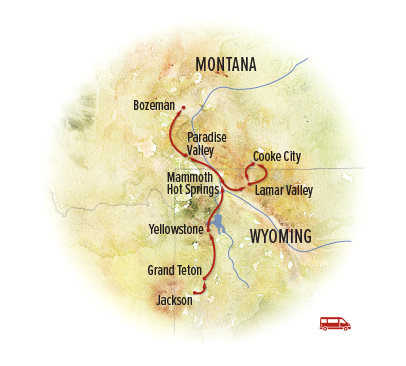 On a photo safari, we slow down to take advantage of photo opportunities as they arise, without missing a thing. Open to photographers of all ability levels, these trips are guided by naturalist Expedition Leaders who are also accomplished wildlife photographers and instructors. Photo tours include a private gallery visit plus a day in the field with a renowned local wildlife photographer.

Please note: Alternating trips run in the opposite direction, starting in Bozeman and ending in Jackson.


Day 1: Jackson, Wyoming
Old West Jackson sits at the edge of Grand Teton National Park. While retaining its cowboy flavor, Jackson hosts guests with panache. We spend the first night of our Yellowstone safari tour here, meeting our Expedition Leaders and fellow travelers at a welcome dinner this evening.

Day 2: Grand Teton National Park—Scenic Float Trip
Nothing quite prepares you for the drama of the Tetons that rear up in a row of pointed peaks from the floor of Jackson Hole. Protected forever in one of America’s most impressive national parks, the Tetons are emblems of the West’s grandeur. Grand Teton's wildlife is as magnificent as its mountains, and we may get to photograph elk, pronghorn antelope, mule deer, bison and eagles as we traverse the park today in our specialty North American Safari Trucks with double-wide pop-top roof hatches. This afternoon, float the placid Snake River beneath the Tetons’ jagged summits, keeping our lenses ready to capture moose, beavers, osprey, pelicans or even a black bear near the river’s edge. Nearly as appealing a subject as the wildlife are the historic barns and ranch cabins, backed by the summits dusted with fresh snow. In the early evening, we photograph the sunset over the iconic range. Our overnight accommodations are at historic Jackson Lake Lodge, in full view of the peaks.

Day 3: Oxbow Bend / Yellowstone National Park—Old Faithful
There’s no better light than dawn for outstanding photography, and we rise early to capitalize on it. Moose are our objective this morning as we search the willow-covered bottomlands of Oxbow Bend just east of Jackson Lake. The slow-moving water provides habitat for fish that are food for other wildlife, too, and we may spy river otter, beaver, muskrat, osprey, bald eagles and American white pelicans. Entering Yellowstone, the world’s first national park, established in 1872, we get our first glimpses of the geothermal features that dot the landscape. From bubbling mud pots to eruptions of boiling water rocketing skyward, Yellowstone’s geyser areas were one of the unique features that captivated early explorers like John Colter and Jim Bridger and prompted conservationists like Teddy Roosevelt to encourage protection of the park’s natural assets. We also learn about fire ecology as we drive through recovering areas once ravaged by wildfires. At Old Faithful there’s ample time this afternoon to photograph the famous geyser erupting, and to walk among the fumaroles, mud pots and hot springs nearby.

Day 4: Hayden Valley / Grand Canyon of the Yellowstone / Lamar Valley / Cooke City
More of the park lies ahead, including Hayden Valley, a picturesque grazing area for large herds of bison and elk. Yellowstone is home to some 4,000 bison, the largest land mammals in North America, which we expect to encounter today. Bighorn sheep may also be on display near Mount Washburn, and we may also spot coyotes and bald eagles. A stop at the Grand Canyon of the Yellowstone, where Yellowstone Falls pours off a sheer cliff into a thousand-foot-deep gorge, offers the park’s most inspiring vista and an opportunity for iconic photography. This afternoon, we continue on to the Lamar Valley in the park’s remote northeast corner, and as the sun starts to dip, we'll take spotting scopes on a search for bears and wolves. Though Yellowstone's famous gray wolves are elusive and rarely seen up close, the Lamar Valley is the best place in North America to look for them. We have the added advantage of working closely with wolf researchers in the park, who help us track them. Tonight, we stay just outside the park's northern boundary in Cooke City, Montana, at the base of the glacier-scoured Beartooth Range.

Day 5: Lamar Valley Wildlife Safari
Early this morning we set out in search of wolves, grizzly bears and large herds of elk and bison in the broad meadows of the Lamar Valley. Wolves were reintroduced here to their native ecosystem amid much controversy in the 1990s. After a 70-year absence following their government-sanctioned eradication, the wolves have again flourished, supported by bountiful prey. In addition, their predatory presence has helped to right prior imbalances in the ecosystem, and as prey numbers have diminished, so has the frequency and proximity of wolf sightings. We often spy them, though, and our guides' high-powered spotting scopes bring their activities in for a closer view. The afternoon we visit the art gallery of Dan Hartman, a local wildlife photographer whose wolf images are highly renowned. We also thrill to some of the most dramatic mountain vistas in North America as we ascend the famous Scenic Byway to the top of Beartooth Plateau. Charles Kuralt called it the most spectacular road in America, and it’s easy to concur: high alpine lakes sparkle in the waning light as quaking aspen shimmer gold, surrounded by an intensely rugged granite landscape. Early this evening, we head back to the Lamar Valley in hopes of spotting wolves and bears before returning to Cooke City.

Day 6: Lamar Valley / Mammoth Hot Springs / Paradise Valley / Bozeman
One last opportunity for wolf and bear tracking awaits in the Lamar Valley this morning. Traveling back toward the northern reaches of the park, we may take a short hike to photograph an abandoned wolf or bear den before we venture to Mammoth Hot Springs, where thermal water spills over travertine terraces that have been described as a “cave turned inside out.” Heat-loving organisms called thermophiles add distinct colors to the mineral-laden formations. We then follow the Yellowstone River through scenic Paradise Valley, with views of the Absaroka and the Gallatin ranges en route to Bozeman, where we'll recount our adventures over a farewell dinner

Day 7: Bozeman / Depart
Today, our Yellowstone safari concludes. The day is free to enjoy the town of Bozeman, a historic Old West/New West town with a rich mining and trapping heritage. The small city boasts 40 individual properties on the National Register of Historic Places, and it’s home to Montana State University. Choose from a wide range of outdoor and cultural activities. A highlight is the Museum of the Rockies, a Smithsonian Affiliate and repository for state and federal dinosaur fossils, including the mounted Montana's T. rex skeleton. When you're ready to depart, complimentary shuttle service is available from the hotel to the airport.


Click here to see your trip details PDF. You should also receive it by email momentarily.
/us-national-parks-tours/yellowstone-safari/itinerary/hidden-yellowstone-photo-itinerary-2021/
Physical Requirements