When to Go | Galapagos Weather & Climate

Located at the equator, the Galapagos Islands' subtropical climate makes the islands an inviting year-round destination. Weather variations are subtle, ranging from a daily high temperature of 74°F in August to a slightly warmer 88° in March. Water temperatures remain in the mid-70s year-round with underwater visibility ranging from 30-70 feet—but the water tends to get extra clear from January through March, with visibility often around 100 feet.

The Galapagos doesn’t see a huge contrast from month to month in temperatures or rainfall, even when comparing the warmest and wettest to the coolest and driest months. A flux of ocean currents creates two seasons: the warm, wet season and the cool, dry “” season.

Temperatures are recorded in only a few locations throughout the islands, and conditions can vary from region to region.

Temperatures below are in Fahrenheit. 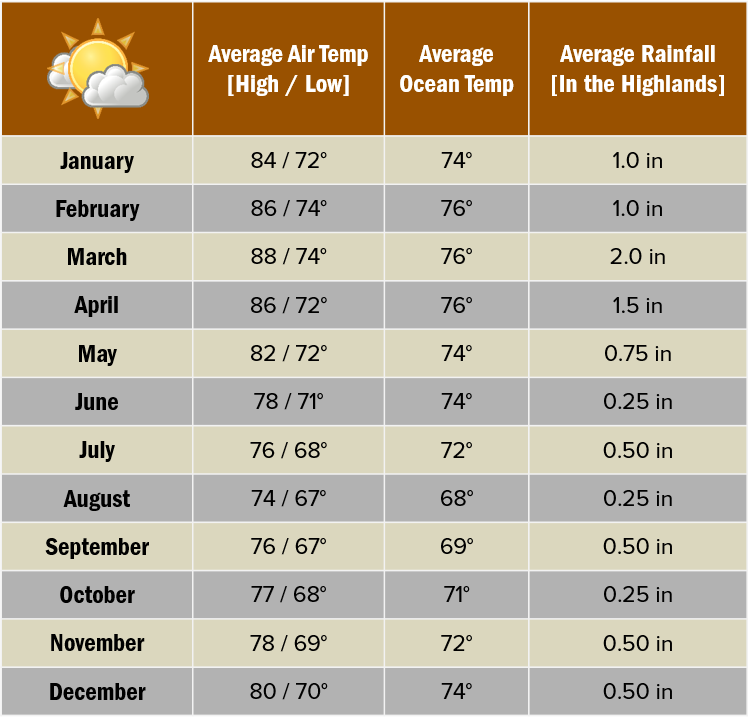 A slightly warmer season with occasional rain showers in the coastal areas and more frequent rain in the higher elevations runs from December through May, with February through April usually being the warmest and wettest times of the year. Typically, at the lower elevations where we spend most of our trip, there will be blue skies, sunshine occasional haze.

The warm season results from the weakening of the Humboldt Current (coming from South America) and Cromwell Current (an equatorial countercurrent bringing cool water from deep in the ocean) and the disappearance of a foggy overcast known as . During the rainy season, there are often warm, sunny periods interspersed by rain showers and occasional downpours. Generally, it is very pleasant.

The ocean is clearer and warms to the mid-70s or even 80°F, and air temperatures can reach the high 80s. It can be extremely humid, with clouds that gather around the higher islands. These clouds are formed from of the warmer waters and occasionally result in rain, often confined to the higher elevations of the islands. In some years, rain is quite scarce.

The season from June through November brings slightly cooler temperatures, sunny skies intermittent cloud cover. Even in August, the coolest month, the average daily high is 74°F. Seas tend to be choppier from August through October.

Cool waters from the Humboldt and Cromwell currents bring in the , a hazy overcast that is widespread and quite moist. The highlands of the Galapagos receive most of their annual moisture from the misty fog-drip that accompanies the .

Water temperatures range from the low 70s throughout most of the islands, down to 60°F on the west side of Isabela. These cooler waters also bring a distinct plankton bloom and a richer environment that supports the great seabird populations of the Galapagos.

Generally speaking, El Niño is a pattern of warmer weather along with the reduction of cold water currents that usually course up from Antarctica. The pattern generally occurs around Christmastime, hence the name El Niño or “Christ Child.” El Nino patterns happen annually, but periods when this phenomenon is more intense are known as “El Niño Years” and occur every 5-7 years. The typical El Niño effect is more rain and warmer temperatures, which makes ocean snorkeling more pleasant but can cause stress to wildlife, as the ocean is less productive because there are fewer nutrients available for the plankton to grow. It is a Darwinian evolutionary pattern in motion, as it tends to accelerate natural selection. Being on the equator, the Islands aren’t prone to cyclones or serious weather patterns associated with El Niño events in other areas of the world.

While each El Niño year is different, during particularly strong years our travelers can see differences such as abandoned baby sea lions and skinny marine iguanas due to the lack of resources. Other differences can usually only be noticed by our Expedition Leaders, who live in the Galapagos year-round. But visiting during El Niño is a great learning experience as you can witness the drama of this unique event.
Travel To the Galapagos Year-Round on These Adventures
Repeater Layout : vertical-2up
Galapagos Hiking & Kayaking Adventure ~14
New Itinerary!

Small-group adventures aboard your choice of private yachts, led by our outstanding naturalist guides and photo pros. Snorkel and swim with sea lions, sea turtles and penguins on this incomparable nature odyssey.
8 or 10 Days / Year-Round
From $5995 (+air)
16
Photo Departures Available
New Ship!
Know Before You Go