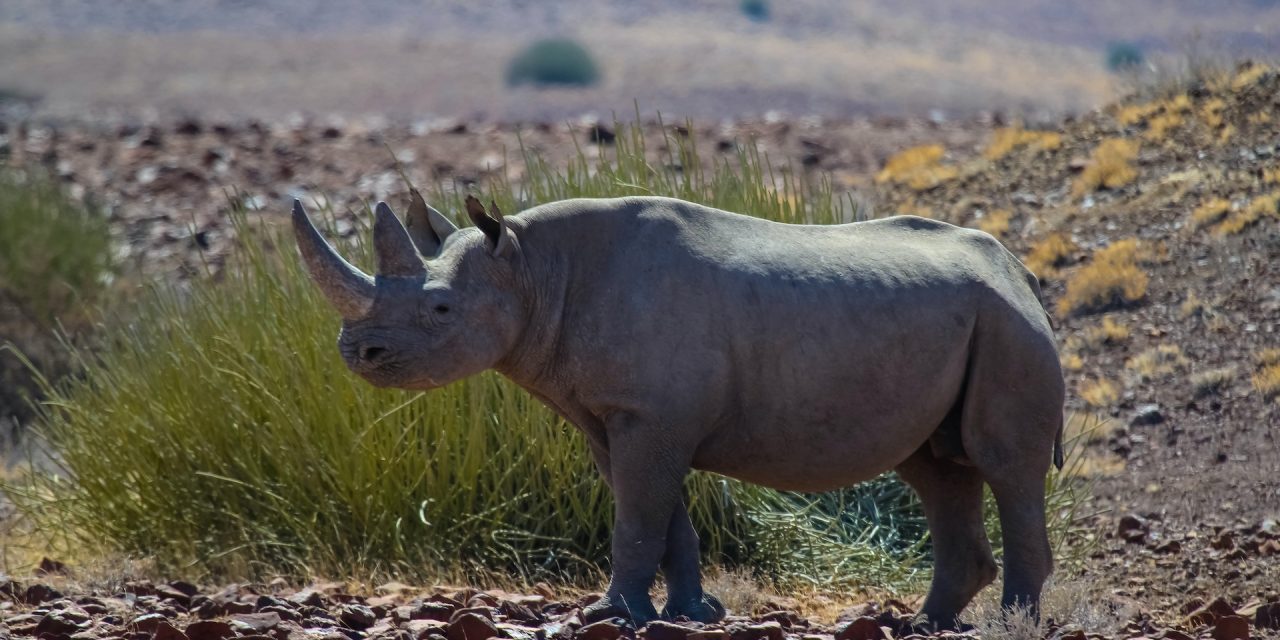 In the heart of one of Africa’s last great wildernesses, a rare and extraordinary experience awaits. Damaraland, a remote and untamed landscape tucked away in north-west Namibia—a country already known for its undulating red sands and ancient basalt mountains—can be arid and unforgiving; a place where many species have had to adapt, just to survive. Here among Damaraland’s vast open plains, granite kopjes and prehistoric river beds exist an array of wildlife, from Hartmann’s mountain zebra to desert lions and elephants, all of which have learned how to live under extreme conditions. Among them is one of the largest free-roaming populations of black rhinos on the continent.

The black rhino is a two-horned rhinoceros that’s also an endangered icon. Smaller than the greater one-horned rhino (rhinoceros unicornis), this three-toed ungulate with hairless skin and a prehensile lip adapted for grasping branches and leaves as food has an estimated less than 5,600 of them remaining in the wild. It’s a startling number since just over a half-century ago there were believed to be more than 100,000 of these impressive creatures still roaming throughout eastern and southern Africa. But due to such factors as illegal poaching, habitat loss and ongoing drought, their numbers dropped by a whopping 98% between 1960 and 1995, with less than 2,500 wild black rhinos remaining at one point. However, thanks to ongoing conservation efforts continent-wide, including those of Save the Rhino Trust Namibia (SRT), their numbers have since been increasing steadily.

In collaboration with Namibia’s Ministry of Environment and Tourism (MET), the country’s police force and local Namibian communities, SRT has been working to protect the country’s rare, desert-adapted rhinos since the organization’s founding in 1982. Today SRT trackers from these local communities use their knowledge of the region’s landscape and wildlife to patrol 5.7 million acres of Namibia’s Damaraland and Kunene region, which sits between the stark Skeleton Desert coast and Etosha National Park, the country’s most popular nature reserve, protecting the endangered black rhinos that live in this desolate and unfenced area.

Their multifaceted conservation efforts include joint patrols with law enforcement officers to assist with investigations of poaching incidents and monitoring the existing rhino population, as well as engaging the local public in ways that help shed light on the species and its importance in the lives of other wildlife species. Through sustainable ecotourism, SRT not only gives back to the local communities by providing residents increased opportunities for employment, but they also help to unify these communities in a cooperative effort to protect and maintain a habitat for their wildlife.

The more eyes on the ground, the better.

Much of SRT’s rhino tracking is done on foot, covering large swaths of rocky plains and otherwise rough terrain that’s outside the boundaries of traditional parklands. This means travelers get to track rhinos on foot as well—that is, in the company of an expert and knowledgeable guide.

Northwestern Namibia’s enormous and primeval basalt landscape known as the Palmwag Concession came to fruition 125 million years ago, through a series of massive magma eruptions. It’s a truly impressive million-acre space and one that—along with visits to the shape-shifting sand dunes of the country’s Sossusvlei, and Etosha National Park—Nat Hab’s 10-day Great Namibia Wildlife Safari offers an opportunity to explore. However, the trip’s real kicker is the rare chance to also track black rhinos on foot. It’s one of the most exhilarating experiences around: following in the footsteps of these huge creatures that can weigh between 1,750 and 3,000 pounds, and be up to 5.5 feet tall and 12.5 feet long, and viewing them up close. While your guides are the go-to sources for what to do and when while tracking rhino, there are a few standard tips that can be helpful to know.

Tips for Rhino Tracking on Foot

Essentially, you want to be where the wind is blowing into your face and away from the rhinoceros. Rhinos use their sense of scent to alert them of predators and other potential threats, and while you may be neither, the wildlife doesn’t quite know that.

Any unusual noises may cause the rhinos to flee, and/or potentially charge if they feel threatened. Rhinos have a well-adapted sense of hearing (and are especially sensitive to noise when they’re pregnant), and some sounds may be up to twice as loud to them as they are to us.

Seeing rhinos up close may take time, so revel in the experience. Take in your surroundings, pay attention to scents and sounds, and just enjoy.

Nat Hab’s extraordinary Namibia wildlife adventure is limited to seven guests and includes overnight lodging at the extremely remote Desert Rhino Camp, a comfortable safari camp of eight A-framed tents, all overlooking a vast plain dotted with the country’s national plant, welwitschia—a bizarre-looking living fossil identifiable by its two large and slow-growing, ground-lying leaves. Desert Rhino Camp is one of less than a handful of lodges situated directly within the Palmwag protected area, and it works in partnership with SRT, as well as local communities and the Palmwag Concession, in developing responsible ecotourism initiatives (and in doing so, supporting black rhino and other wildlife populations) in the region.

There’s plenty of wildlife to see in Palmwag Concession in addition to black rhinos, including desert-adapted elephant, giraffe and zebra, and sometimes even predators such as cheetah, leopard and spotted hyena. Set out on a 4×4 game drive for the best opportunity to get a sense of Palmwag’s immense landscape—an array of flat-top mountains and red, rocky terrain dotted with large, endemic Euphorbia damarana bushes, a flowering bush with slender gray stems—and spot the most wildlife, much of which can be found gathered around the concession’s freshwater springs. The area is also known for its birdlife, which includes the endemic Benguela long-billed lark, grey-backed sparrow-lark and booted eagles, ​​which have legs that are fully covered in feathers. Guided nature hikes are a great way to take in the concession’s avian species.