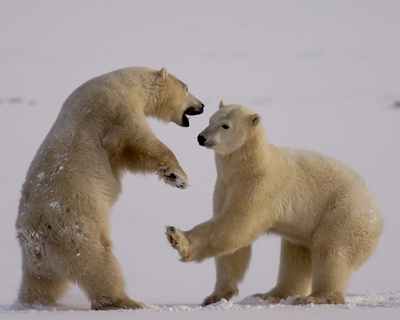 Aggressive polar bears are part of the Churchill experience.

Winter arrived in Churchill with fierce winds whipping across the Hudson Bay from the North. By mid-afternoon a noticeable change in the temperature (25F) and snow flurries coming sideways was a sure sign of the changing season. This time it’s the real thing.

The day began with a “bang”…literally. Guide Jared radioed in from Northern nights Lodge requesting the office to call Bear Alert. As Conservation officers arrived, both Jared’s and Guide Eric’s folks were there. One officer quickly pulled out his shotgun and blasted off about 20 rounds of cracker shells in the direction of the massive 800 lb bear that was concealed somewhat in the willows just 200 feet away from the hotel. As Jared’s group huddled together on the outside deck and Eric’s watched from their bus, the bear slowly rose and sauntered away only to turn and come back toward the officer that had moved out into the willows. Everyone held their breath as finally the bear was discouraged by the constant fire from his gun. He moved across the train tracks, over the road and down to the flats where he eventually, reluctantly dove into the Churchill River disappearing under the surface. This bear encounter was a once in a lifetime occurrence. Still buzzing Jared’s group finished up the morning with a spectacularly white Snowy Owl sheltered in the Willows at Akudlik Marsh just west of town.

After a very slow start to the morning out on the tundra, CWMA style, everything seemed to come together. Guide Paul and entourage rumbled through the early morning fog finally coming upon a mother and two – year old as well as a mother with a cub of the year (Coy). Soon after spotting a Glaucous Gull off in the distance shoreward, two young  feisty, male polar Bears came on the scene much to the ire of both mother bears. Being young males, mischief quickly ensued as they chased the family units away.around the rovers. Although this scenario plays out regularly this time of year, it rarely escalates to the point where a cub is killed. Mom does a good job at protecting her cubs. Soon after, on the way to Gordon point, just past First Tower, Paul’s folks were approached by a smaller female whose curiosity lead her to investigate the rover for a good hour.

Guide Melissa and her band of travelers had meanwhile bee-lined for the Flats area to try to find some heavy bear activity. The two hour trip paid off as they found multiple bears including a big male who situated himself under the rover’s back deck and sniffed up through the grate at guests shoes.He also perched himself up against the vehicle a couple of times. Quite the thrill. Another bear was plying with sticks and rolling in the willows. The group also had the fortune of two Arctic Foxes and an Arctic Hare before heading back toward the Tundra Lodge to finish off a bountiful afternoon. Once there, two sets of moms with cubs gave our guests a chance to observe incredible, tender interactions to finish off the day.

Guide Brent’s folks were treated to a fairly aggressive male on the inland road. After parking the rover near the lodge and observing multiple interactions between mom with cubs and males rousting them and chasing up and down wind, the group had a unforgettable experience. Bears gather enormous amounts of knowledge and information from the wind and positioning in such wind plays a big part in interactions between all bears and other animals. Suddenly, the biggest male in the area came to their rover, circled around a few times then stood up against the rover and thumped his nose hard against the driver – side window. Ecstatic travelers and guide then headed back to launch in an ever increasing snowfall. All in a days work in the North. 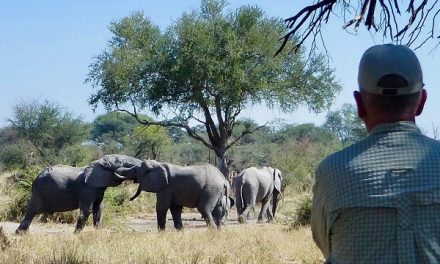 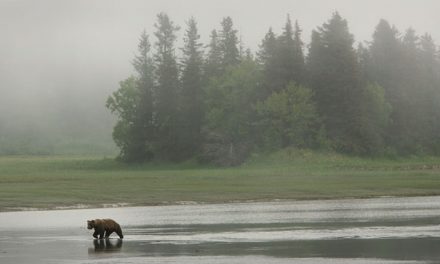 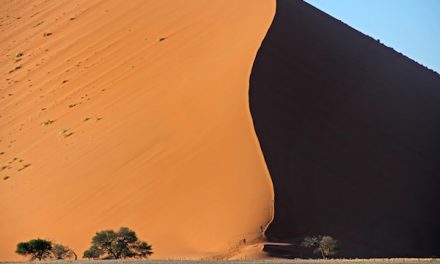 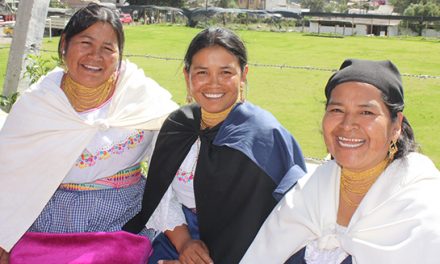