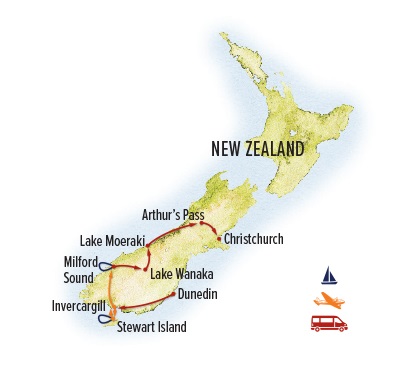 Day 1: Dunedin, New Zealand
Our New Zealand adventure tour starts in Dunedin. Guests who begin their journey on our Akaroa and Oamaru Extension will travel by road from Oamaru to Dunedin to meet the group. Historic Dunedin boomed during a series of gold rushes in the 19th century and was once the largest metropolis in New Zealand. Today it remains one of its most important commercial centers. Those arriving early may wish to join our Expedition Leader for an optional tour in Dunedin, which will include an outing to Penguin Place, a private conservation reserve and rehabilitation center for endangered yellow-eyed penguins. It was founded in 1985 when just eight breeding pairs inhabited the property. This penguin species, found only in New Zealand, is one of the rarest in the world, with fewer than 5,000 remaining. Gather for a welcome dinner this evening at Larnach Castle, built in 1871.

This afternoon, board a short flight to idyllic Stewart Island, 19 miles offshore, where we spend two nights. Much of this rugged granite island lies within the new Rakiura National Park, whose Maori name means “Land of Glowing Skies.” Its rain forests shelter many native plants, which we discover on nature walks through the unique habitat. The island is a haven for birds, and we listen for the songs of parakeets and bellbirds. We hope to spy the elusive brown kiwi on a guided night walk to a starlit beach on New Zealand’s southernmost point. And if we're very lucky, we might catch a glimpse of the aurora australis in the southern sky.

Day 3: Stewart Island / Ulva Island
Start the day with a private boat cruise off Stewart Island to view the multitudes of pelagic seabirds that live and breed in these coastal waters. We expect to see a great variety at close range—albatrosses, shearwaters, prions, and several penguin species including yellow-eyed, blue and Fiordland crested. Afterward, take an intimate nature walk with a local naturalist who works closely with Stewart Island native and birder extraordinaire Ulva Goodwillie, the namesake of the Ulva Island sanctuary. On Ulva, just a short boat ride away from neighboring Stewart Island, explore pristine trails and beaches, observing rare bird species that no longer exist on the main islands.

Days 4 & 5: Te Anau / Milford Sound / Fiordland National Park
After a short flight back to the mainland, continue this morning to Te Anau, the lakeside village that is the gateway to Fiordland National Park. It's no wonder this mythical-looking land of pointed peaks and sheer rock walls, high waterfalls and drifting mists was chosen as one of the main settings for the film adaptation of J.R.R. Tolkien’s The Fellowship of the Ring. We then board a private chartered boat for a scenic cruise around the glacier-carved wonderland of Milford Sound, with lunch served aboard. As we ply the steep-walled fjords that wind beneath a perpetual cap of snow and ice, look for fur seals, crested penguins bottlenose dolphins. High above, pyramid-shaped Mitre Peak rises two-thirds of a mile straight out of the sea. Our naturalist Expedition Leader, an expert on New Zealand wildlife and geography, interprets all we see.

Day 6: Crown Range Road / Lake Wanaka
Before departing Te Anau this morning, visit a local bird sanctuary to see the rare flightless takahe, an indigenous bird with blue-black and olive-green plumage and a large red bill. Then we'll skirt Lake Wakatipu and climb the spectacular Crown Range Road, where vistas of the aptly named Remarkables Range unfold. Spend the afternoon admiring the vast blue expanse of Lake Wanaka, to Mount Aspiring National Park. The basin filled by Lake Wanaka was gouged out by the Wanaka Glacier born high in the ice fields that crown the jagged peaks in the distance. In the Maori language, Wanaka means "renewal of the soul"—exactly what our time here offers. After nightfall, step outside and look up: the Wanaka region has some of the darkest, starriest night skies on Earth.

Day 7: Lake Wanaka / Haast Pass / Lake Moeraki
Our day begins with a 3-hour private boat excursion on Lake Wanaka. Step ashore on remote Mou Waho Island, a predator-free nature reserve that’s home to the rare flightless buff weka—a curious, amiable bird that has been extinct on the mainland since 1920. A guided bush walk to the top of the island reveals a hidden lake on the summit, a photogenic spot where we’ll enjoy a mug of "high tea" with the panorama of the Southern Alps on display before us. Leaving Wanaka's golden hills behind, traverse moss-draped beech forest as we cross Haast Pass this afternoon into the heart of the West Coast glacier country. Stop for a nature walk at the pass, which is one of three main passages across the Southern Alps and was once an important Maori trading route. The scenery is glorious, and trails lead from the road’s edge along turquoise streams into the  to dramatic waterfalls. Continue to Lake Moeraki to check in for a two-night stay at a secluded wilderness lodge in this exceptionally scenic region.

From our lodge base, explore the natural environs on locally guided excursions, including kayaking on Lake Moeraki and a walk among head-high ferns to wild Munro Beach. Located away from light pollution near the Aoraki Mackenzie International Dark Sky Reserve—one of just eight such reserves in the world—we take advantage of Lake Moeraki’s cover of darkness on a guided night walk. A star talk is included, as well as a chance to look for glowworms, whose bioluminescent pearl strands dangle from the trees. Our October and November departures include a private outing to see rare Tawaki penguins, found only on the southwest coast of New Zealand. Also called Fiordland crested penguins, these are the only penguins that live in the . About 2,000 pairs remain, with 10 percent of the population found along the shores of Lake Moeraki. At other times of the year, we take a rain forest hike to discover thousand-year-old trees, myriad ferns orchids, and to search for birdlife in the protected natural environs.

Day 9: Lake Moeraki / Westland Tai Poutini National Park / Arthur's Pass
More of New Zealand’s magnificent scenery unfolds as we travel along the west coast into glacier country. Two World Heritage Site national parks, Aoraki Mount Cook and Westland Tai Poutini, encompass many of New Zealand's highest mountains, turquoise lakes, braided rivers and massive glaciers, including the Tasman, Franz Josef Fox. Our Expedition Leader leads a walk to an overlook where the ice fields of the Southern Alps spawn glaciers that wind down like frozen highways into primeval rain forest, almost reaching the ocean. In this unusual mix of habitats, keep an eye out for kea, the alpine parrot endemic to this part of New Zealand.

We stop at Hokitika, a historic river port born out of the 1860 gold rush. Today, the laid-back small town is known for an indigenous greenstone called pounamu, or New Zealand jade, prized by the Maori for its strength, durability beauty, and used for weapons, tools and personal ornaments. We walk along the sandy beach where plentiful driftwood is formed into imaginative sculptures before continuing to Westland Tai Poutini National Park. Heading inland toward the icebound heights of the Southern Alps, our route traverses the Craigieburn Range, where we find endemic scree plants, giant weta insects and dramatic views of Castle Hill Basin. Our destination is Arthur’s Pass Wilderness Lodge, a deluxe  set amid mountain beech forest and the surrounding Arthur’s Pass National Park.

Days 10 & 11: Arthur’s Pass / Christchurch
Our lodge lies at the heart of a working sheep station, where some 3,000 sheep are raised for fine merino wool. During a full day of exploration, learn about sheep farming and enjoy a private kayaking excursion on Lake Pearson, a placid high-country lake tucked between steep mountainsides. There are also several options to hike trails around the lodge with a local naturalist. On our final morning, take a last leisurely nature walk before departing for Christchurch. En route, we stop at a local winery for lunch. We reach Christchurch this afternoon, New Zealand's oldest city, noted for its British character and Victorian architecture, although much of the latter was lost in the devastating 2010 and 2011 Canterbury earthquakes. A brief city tour includes a stop at Quake City, an exhibit about the natural and human dimensions of the disaster, from which the city is still recovering. This evening, enjoy a cozy farewell dinner at a local home that exudes the essence of New Zealand hospitality.

Day 12: Christchurch / Depart
Our New Zealand adventure draws to a close as we transfer to the airport for flights home.

Interested in extending your trip? Link it up with another adventure!
Repeater Layout : horizontal
Akaroa and Oamaru Extension


Click here to see your trip details PDF. You should also receive it by email momentarily.
Ask a Question
Fill out the form below to receive additional information about our New Zealand Nature Explorer or give us a call at 800-543-8917.
Download Trip Details
Receive our handy trip PDF by email and have everything you need at your fingertips, including highlights of the trip, itinerary, accommodations, and full details on dates, prices and logistics.


Click here to see your trip details PDF. You should also receive it by email momentarily.
/asia-adventure-travel/new-zealand-explorer/itinerary/
Physical Requirements