Fill out the form below to receive additional information about our India Tiger Safari: A Photo Pro Expedition or give us a call at 800-543-8917. 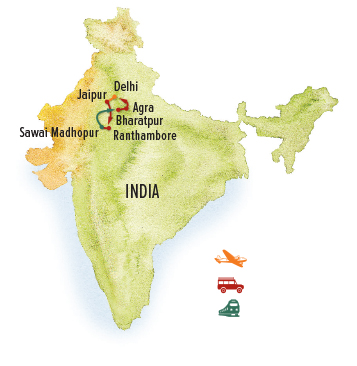 Day 1: New Delhi, India
Arrive in New Delhi where you are met at the airport and transferred to the Taj Mahal Hotel. One of the most distinguished addresses in the city, this landmark luxury hotel provides a comfortable respite after your travels. The evening is at leisure with dinner on your own—try one of the hotel's many fine restaurants, or inquire with the concierge for nearby suggestions.

Day 2: Photographing Delhi Old & New
India’s thriving capital offers a captivating introduction to the country and its cultures, in vivid counterpoint to the wild places that lie ahead. There are two distinct sections of the city, ancient Old Delhi, and New Delhi, founded in 1911 by the British at the height of their empire. A half-day tour, timed to avoid the heat of midday, offers countless photography opportunities as we explore centuries of Old Delhi's complex, multi-layered history. A rickshaw ride provides a fitting overview, while a guided walk through the narrow lanes and bustling Chandni Chowk Market reveals architectural treasures like Jama Masjid, India's largest mosque and the magnum opus of Mughal Emperor Shah Jahan. Completed in 1656 by more than 5,000 laborers, the grand edifice features alternating vertical strips of red sandstone and white marble, with a vast inner courtyard that can hold 25,000 people.

We also visit Bangla Sahib, one of the country's most revered Sikh temples. The complex is associated with Guru Har Krishan and includes the main temple, a school, a sacred water tank and a large community kitchen that generously prepares over 10,000 free meals each day, known as langar, all cooked by volunteers using donated ingredients from Sikh farmers. This evening we join our Expedition Leader for a welcome dinner and orientation to all the photography adventures that await.

Day 3: Jaipur—City Tour & Jhalana Leopard Safari
Transfer to the Delhi airport early this morning for our short flight to Jaipur, Rajasthan’s fabled "Pink City" of sandstone. On arrival in Jaipur, we stop for breakfast near the airport, followed by a sightseeing tour of Jaipur. Rajasthan’s fabled capital is surrounded on all sides by rugged hills, crowned with forts and enclosed by embattled walls. With its flamboyant display of Rajasthani architecture, Jaipur is a visual delight, offering endless photography subjects. Its sprawling bazaars draw locals arriving in rickshaws and camel-drawn carts, shopping for a dazzling array of goods, from carpets and camel leather bags to precious stones and textiles. Bags of spices perfume the air, and huge metal pots simmer with pungent curries. Our tour includes a visit to the striking red and pink sandstone Hawa Mahal—the Palace of the Winds—featuring a grand, intricate facade—and Jantar Mantar, an early 18th-century astronomical observatory site that is a UNESCO World Heritage Site.

After arriving at the Jai Mahal Palace Hotel for lunch and rest time, we make an afternoon safari in Jhalana Leopard Reserve. This conservation-focused park within the city's bounds was once a hunting grounds for the royal families of Jaipur. India's first leopard reserve, it was opened to the public for wildlife viewing in 2016. In addition to 30 resident leopards, the park is also home to striped hyena, Indian civet, jungle cats, desert fox jackal, porcupine, mongoose, monitor lizard, Sambar deer, spotted deer (chital), blue bull (nilgai) and prolific birdlife. Spot wildlife and survey the Aravali Hills from Shikar Audi, a former hunting lodge for the maharajahs in the middle of the reserve, which is topped with animal-spotting platform. We spend the night in Jaipur.

Day 4: Jaipur—Balloon Safari / Ranthambore National Park
A sunrise balloon safari offers a chance to photograph Jaipur from a very exclusive perspective as we float over traditional villages, spectacular sandstone forts, hidden palaces and breathtaking landscapes. Return to our hotel for breakfast before continuing by road to Ranthambore National Park. On arrival, we check in to luxurious 5-star tented accommodations inspired by the opulent caravans of India's royal families of old. Spend the next five nights surrounded by tranquil gardens, forest and grasslands that are the domain of the Bengal tiger, staying in utmost comfort with excellent proximity to the park.

Once the hunting grounds of the Maharajas of Jaipur, today Ranthambore National Park is one of India's top conservation success stories. With tiger numbers steadily on the rise, it offers India’s best opportunity to observe and photograph them in the wild, especially at this dry time of year when vegetation is sparse and tigers more readily visible. The park sits between the rugged Aravali and Vindhya hills, a broad swath of jungle scrub bordered by steep, rocky ridges and highland plateaus dotted with lakes. More than 300 different plant species grow here, though the environs are largely dry deciduous forest—and that means it's easier to spot tigers and other wildlife, in contrast to places where the understory is lusher. This afternoon, we make our first foray into the park. Covering 150 square miles, Ranthambore is one of India’s largest nature reserves, and certainly among its most famous, given its reputation for excellent tiger viewing prospects. While tigers are always elusive, the odds of seeing them are high in Ranthambore, especially at the time of year we visit.

Days 5-9: Tiger & Wildlife Photography in Ranthambore National Park
Our daily safari drives take place early in the morning and late afternoon, when temperatures are relatively cooler, wildlife is more active and light conditions are better for photography. We head out in 4x4 vehicles before sunrise each morning, eager for the day's discoveries. On two days we have half-day access via special permits to the run of the park, without needing to follow prescribed routes or more limited times: we follow the tigers!

In contrast to an African safari where wildlife is often on display before us, India's animals take more effort to find. Tigers typically take shelter under the cover of trees and bushes, hiding from their prey and seeking relief from the heat. Because their stripes provide excellent camouflage, we have to work hard to locate them. But our Expedition Leader and driver-guides are seasoned pros, and we follow their lead, listening for sounds and watching for signs that may reveal a tiger's location: rustling grass, deer racing away from its presence, birds circling overhead. While tigers are our main focus, other wildlife is also plentiful in the park. Sightings may include spotted deer, nilgai, jackal, jungle cat, sloth bear, sambar, chinkara gazelle, wild boar, langur monkeys and rhesus macaques. Ranthambore is also home to a notable leopard population, although they tend to stay in higher, more inaccessible areas and are not frequently visible. Birds flourish here, too, with more than 300 species in the reserve. Keep an eye out for crested serpent eagles, paradise flycatchers, painted storks, peacocks and many more.

In the middle of the day, return to the comfort of our 5-star tented lodge to relax or cool off in the swimming pool. We'll also visit the Ranthambore School of Art, and Dhonk, a local handicraft training institute.

Day 10: Agra—Agra Fort & Taj Mahal at Sunset
This morning, transfer to the railway station and board the train for a 3-hour rail journey to Bharatpur, then continue by road to Agra. which attained fame as the capital of the Mughal empire during the 16th and 17th centuries. It flourished under a series of emperors who attracted artisans from Persia and central Asia, and the city is still famous for its handicrafts such as inlay work on marble, woven carpets, jewelry, zari and embroidery. Yet it is Agra's architectural monuments that draw the greatest renown. After checking into our hotel, we'll tour magnificent Agra Fort this afternoon. The fort, a UNESCO World Heritage Site, was the locus of Mughal power until the imperial capital was moved to Delhi in 1637. Photograph its maze of courtyards, mosques and luxurious private chambers that capture the wealth and prestige of the empire during its heyday.

We then head to the Taj Mahal to photograph this celebrated monument to love in the golden light of sunset. Begun in 1631 by Emperor Shah Jahan as a memorial to his beloved wife, the Taj Mahal manifests the apex of Mughal art in its exquisite design details and elaborate gardens. Standing regally on the banks of the River Yamuna, the Taj Mahal took 22 years to complete with the labor of 20,000 men and a thousand elephants. It is considered one of the seven wonders of the modern world.

Day 11: Taj Mahal Sunrise Photo Shoot / Delhi / Depart
Rise early this morning to photograph the Taj Mahal in the ethereal light of dawn, followed by a guided sightseeing tour. To experience the sunrise at the Taj Mahal is magical, when the translucent white marble glows rosy-pink in the morning rays and photography conditions are usually superb (weather permitting). An icon to romance, the Taj Mahal has captivated the imaginations of travelers and writers since its completion in 1653. After breakfast we drive back to Delhi, where private day rooms have been reserved through the evening. Later tonight, transfer to Delhi’s international airport for overnight flights home. As our India photo safari comes to a close, we share the observation of Keith Bellows, Vice President of the National Geographic Society, who said, “I had been seeing the world in black & white and, when brought face-to-face with India, experienced everything re-rendered in brilliant technicolor."

Interested in extending your trip? Link it up with another adventure!
Repeater Layout : vertical
Land of the Snow Leopard
New Trip!

On a winter adventure in far-north India, join us on a quest to view one of the world's most elusive big cats. Stay in the very midst of its Himalayan habitat at our private lodge base in a small village in Ladakh.
10 Days / Dec–Apr
From $9595 (+air)
Limited to 10 Travelers
New Trip!
Snow Leopard Quest: A Photo Pro Expedition
New Trip!

Track and photograph the world's most elusive big cats in their native Himalayan habitat, on our small-group winter expedition to the remote alpine heights of far-north India.


Click here to see your trip details PDF. You should also receive it by email momentarily.
Ask a Question
Fill out the form below to receive additional information about our India Tiger Safari: A Photo Pro Expedition or give us a call at 800-543-8917.
Download Trip Details
Receive our handy trip PDF by email and have everything you need at your fingertips, including highlights of the trip, itinerary, accommodations, and full details on dates, prices and logistics.


Click here to see your trip details PDF. You should also receive it by email momentarily.
/asia-adventure-travel/india-tiger-photo-safari/itinerary/
Physical Requirements