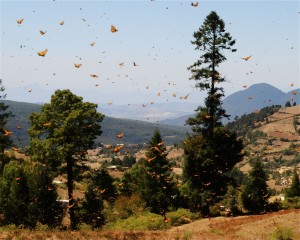 Each year around El Día de Muertos—celebrated November 1 and 2—the sky over the Mexican mountain village of Anguangeo becomes a flurry of orange. But it’s no swirl of bright autumn leaves. Instead, picture millions of monarch butterflies on the wing, fluttering in an endless stream into a few remote groves of firs in the hills above the town.


The local people have long believed the monarchs are the returning spirits of their deceased relatives, mysteriously arriving at the same time each year, coinciding with the Day of the Dead. Aztec tradition holds that the souls of the departed will return as hummingbirds and butterflies, and the link between myth and the monarchs’ annual return spans centuries. 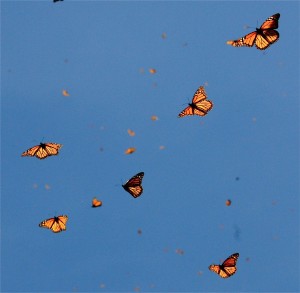 With the first frosts of autumn in southern Canada and the northeastern United States, the bright orange monarchs take to the skies. Drawn south by an innate compass that remains a mystery to scientists, they fly 50 miles a day for two to three months—up to 3,000 miles in all—to reach their ancestral wintering grounds in Mexico’s central highlands. By early November, tens of millions of monarchs have taken roost in the oyamel fir trees. The air here at 10,000 feet is thin and moist, yet this forest provides refuge for the butterflies, which spend five months huddled together against fog, freezing rain and even snow, clinging to trunks and branches in a semi-dormant state till warm spring winds urge them north again.


Visitors to the monarchs’ winter kingdom rarely escape the same mystical aura that locals feel in the presence of millions of these delicate, gossamer-winged creatures. 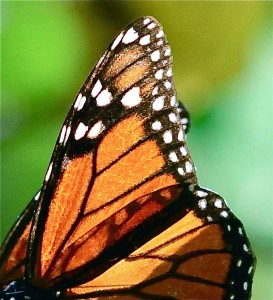 With a small group of Natural Habitat Adventures guests and our two Mexican naturalist guides, Carlos Gonzalez and Fernando Romo, I journeyed in March to the monarchs’ refuge where the marvel of their annual migration was revealed.

Our encounter began in Angangueo, after a four-hour drive from Mexico City. This former silver-mining town in the state of Michoacán lies wedged in a narrow valley, its tumble of colorful stucco houses terracing down the mountainside. An occasional monarch flitted overhead, a hint of what lay above at higher elevations.


We piled into the back of an open-air truck and clattered up the cobblestone road that led out of the village. Passing cornfields and pastures studded with oak and pine, the truck lurched upward till we reached El Rosario, the largest of three monarch sanctuaries protected by the cooperative commitment of local landowners and federal government rangers. The remainder of our ascent would be on foot.


The trail switchbacked through the forest, emerging into grassy meadows on the mountaintop. More monarchs danced in the air, and we knew we were very close. Carlos led us farther down the trail into the trees and stopped. 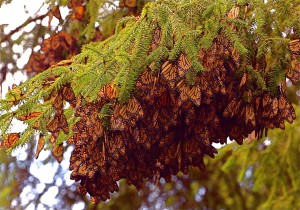 Before us, what looked like a heavy cloak of Spanish moss draped from the tall evergreens. Yet this “moss” quivered, and the air hummed: we realized we were looking at enormous clumps of butterflies, clinging to one another by the hundreds of thousands, hanging on the branches in such density that they bent beneath the insects’ collective weight. They upholstered the bark on the trees’ trunks, too, their wings closed as they huddled together for warmth on a cool, overcast afternoon, looking like withered, rusty leaves. After a bit, the sun began to emerge and with it, the monarchs’ energy. As if the warm rays had flipped a switch, the butterflies began to disengage, fluttering through the air, sometimes landing on a shoulder or the top of a hat. 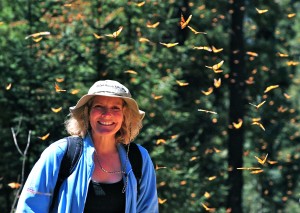 The next day we rode horses into nearby Chincua sanctuary, in full sunshine. Approaching the grove, the air was a flurry of butterflies—their translucent orange wings, thinner than parchment, backlit by the sun like miniature stained-glass windows. It sounded as if a gentle rain was falling or a breeze was rustling dry leaves. Hundreds of thousands fluttered about, a river of orange against the cobalt sky. As a breeze arose, whole trees full of butterflies would burst into activity, orange clouds swirling up and cruising together on an invisible current in the air. Nearby, a small stream provided water for the monarchs to drink, its surface a blanket of vibrating wings. We stood transfixed, watching and pondering, trying to absorb the wonder of this phenomenon. One woman sat silently in the grass, tears flowing down her face as butterflies paused on her sleeves. 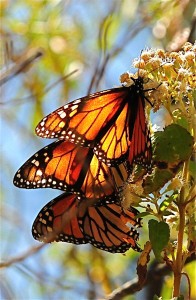 It wasn’t until 1976 that the location of these long-sought groves became known to the outside world. Yet the monarchs’ migration remains one of nature’s most intriguing mysteries. It takes four or five generations of butterflies to make the 3,000-mile flight from Mexico all the way to since the monarch’s typical lifespan is just three to four weeks. But the single, unique migratory generation born in late summer lives eight months, flying all the way back to Mexico where it will spend the winter living off fat reserves until season comes round again. No one knows just how this new generation of butterflies manages to find its way to these isolated sanctuaries, having never been there before. Scientists think they may somehow use the sun’s position, or the earth’s magnetic field, to determine which way is south, but how the monarchs find the exact groves each year remains inscrutable.

The sight of millions of monarchs in the Mexican forests might lead one to think the species is thriving. But while the butterflies aren’t yet endangered, the habitat that sustains their migration is. 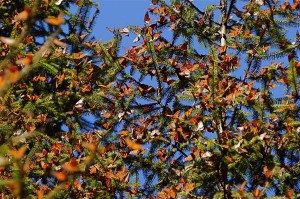 The butterflies subsist on milkweed, and sprawl and pollution are destroying milkweed fields in the United States and Canada. In Mexico, logging continues to decimate the unique forest ecosystem the monarchs rely on during the winter. And most recently, the oyamel fir groves have fallen plague to the infestation of bark beetles that decimating huge swaths of forest across North America. While government officials have sought to curtail illegal logging within the 217-square-mile Monarch Butterfly Biosphere Reserve, they now find themselves racing to fell damaged trees to stop the spread of destruction. 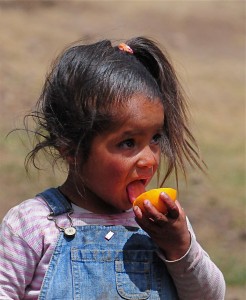 The area is considered a conservation priority site by Mexico’s Federal Commission on Biodiversity (CONABIO) and is one of the Global 200 ecoregions identified by the World Wildlife Fund as priority conservation sites. The World Conservation Union (IUCN) lists the overwintering spectacle as an “endangered biological phenomenon.”


The fate of the monarchs is closely tied to the fate of the local people. Locals recognize the economic value of butterfly visitors, and as monarch tourism grows—taking the pressure off logging—so do the chances for their continued existence.


Preserving the magic of the monarchs is an enterprise that requires cooperation at all levels, from local communities to international endeavors. To learn more about monarchs and efforts to protect them, including a chance to be a part of the major monarch conservation program in the United States, visit Monarch Watch. You can also track the monarchs’ annual migration at Journey North, a monarch education site that provides daily updates on the butterflies’ migratory progress.

Explore the Monarch Kingdom on These Adventures
Repeater Layout : vertical-2up
Kingdom of the Monarchs
New Itinerary!

Kingdom of the Monarchs

Each winter, millions of monarch butterflies migrate to the fir forests of Mexico's Central Highlands—walk among them, take photos, and listen to the air hum with the vibration of their wings!