Galapagos: A Land Without Time

“Please don’t change your watches,” said our expedition leader Giancarlo Toti, as we stood around the baggage claim at the steamy San Cristobal airport in Ecuador. “While we are in the Galapagos, we are going to stay on mainland time.”

I contemplated the rationale of such a request. “Not change our watches?” You can’t just pretend it is a different time than it really is. Agreeing on what time it necessary routine and order and determines appointments, lunch and the end of the . The whole reason that time works is that we all agree on what time it is. 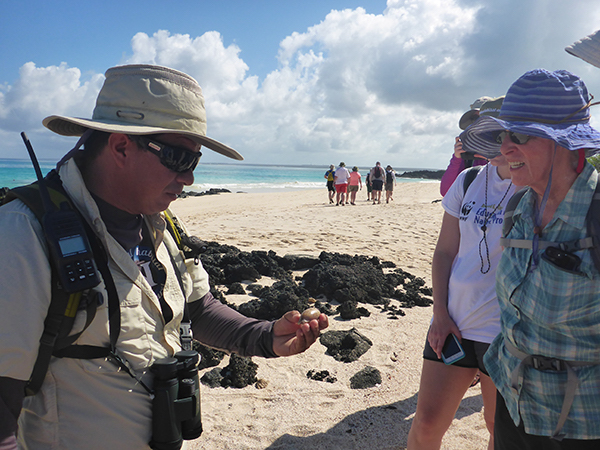 Ninety-seven percent of the Galapagos Islands is preserved as a national park with no human inhabitants. During the next week, our main companions on the islands would be iguanas, frigatebirds, giant tortoises sea lions. “Do blue-footed boobies care what time it is?” I skeptically kept my watch at 2:30 p.m. instead of setting it back an hour to 1:30 p.m. and headed out to the Letty with our small travel group.

Our first morning, we experienced a very practical reason for staying on mainland Ecuador time. Our wake-up call was at a 5:45 a.m. But guess what’s earlier than 5:45 a.m.? 4:45 a.m.! By tricking ourselves into thinking that it was an hour later, we were eating breakfast at 6 a.m. and then exploring Genovesa Island and its thousands of seabirds an hour ahead of the other boats in the harbor and before the heat of the day. By the second day on the boat, we fell into an “early to bed, early to rise” routine that mirrored the sunrise and sunset. Time became not an hour on the clock but simply a property of the mind.

“What time is it?” “Who cares!” We existed in a world unbound by time. 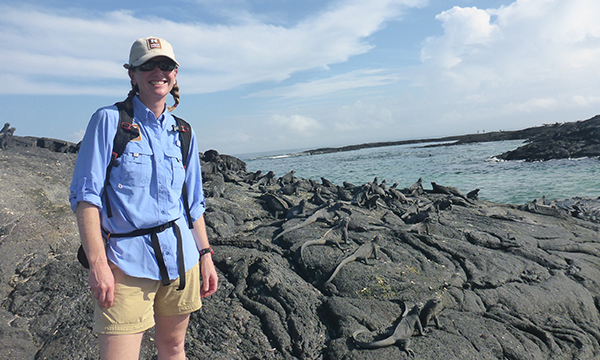 Yet, I thought about time a lot during my Galapagos nature adventure. Geologic time plays a huge role in understanding of the Galapagos Islands. The volcanic islands first erupted above the surface of the Pacific Ocean 7 to 9 million years ago. That is young in geologic time, but such a big number that it is hard to wrap my head around. So our guide, Giancarlo, tried an exercise in scalability.

“Instead of 7 million years old, think seven years,” he said. “Humans have only been on the planet for four hours.”

The Galapagos is one of the few places on the planet that does not have an indigenous population, and the first explorers did not arrive until the mid-16th century. So in our new scale of thinking that was about five minutes ago. So many of the endemic wildlife of the Galapagos and the natural wonders we were experiencing had nothing to do with human influence.

To me, one of the great pleasures of traveling is having an excuse to be disconnected. I want it to be inconvenient to use the Internet and not be bothered by my ceaselessly buzzing phone. It is such a great opportunity to look around and pay close attention to the moment. But my small-group Galapagos tour exceeded even that expectation.

As I reflect upon the trip—swimming with sea lions, walking among giant tortoises, paddle-boarding in Darwin Bay, hiking above Tagus Cove, gazing at the Milky Way in a night sky filled with millions of stars—in my mind, there is no beginning and end. On our Galapagos Islands adventure, I reached a point of living outside the bounds of time. 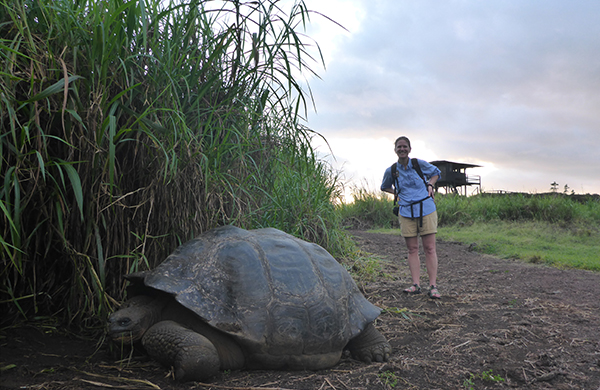 Small-group adventures aboard your choice of private yachts, led by our outstanding naturalist guides and photo pros. Snorkel and swim with sea lions, sea turtles and penguins on this incomparable nature odyssey.