The northern lights have inspired wonder in the generations of people who have laid eyes upon them. The aurora borealis, named after Aurora, the Roman goddess of the dawn, and Boreas, the Greek god of the north wind and winter, has inspired myths and legends around the world. The science behind this spellbinding developed just since the 1950s, offers another explanation for the lights' origins, and discoveries about them continue to this day.

The town of Churchill, Manitoba sees some of the most frequent auroral displays, which travelers observe on Natural Habitat Adventures' Northern Lights & Arctic Cultures trips. Churchill is the ideal location to experience the northern lights because of its easily accessible viewing spots such as Nat Hab's own Aurora Pod, a heated glass enclosure with uninterrupted views on the night sky through its transparent ceiling and sides. Churchill's remoteness ensures very little light pollution for top-quality viewing. The lights usually begin as a faint glow as onlookers wait in hushed anticipation. Then, as they expand and begin to undulate in the night sky, viewers are struck with rapture at the spectacle. 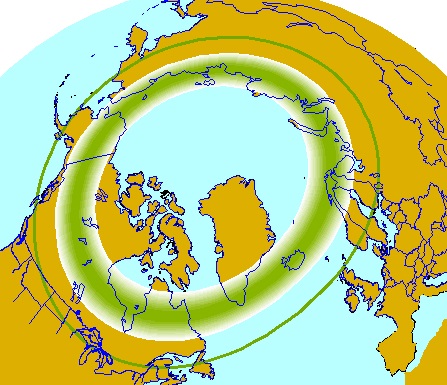 SOLAR ORIGINS OF THE AURORA BOREALIS

On the sun’s surface, scorching hot gases frequently collide and explode. The aurora borealis is a result of this sunspot activity. During a solar eruption, a storm of accelerated electrons and protons is thrown from the sun’s atmosphere through holes in the magnetic field. This stream of energized, charged particles, called solar wind, hurtles at 1 million miles per hour toward Earth.

Earth is partially shielded from the solar wind’s full force by its magnetosphere. However, the open field lines at either pole, charged particles are able to enter the atmosphere. At the poles, the magnetic fields are weaker, and the electrons and protons are captured rather than deflected. These high-energy electrons and protons then collide with nitrogen and oxygen atoms in Earth’s atmosphere, transmitting energy to the atoms. These “excited” atoms then release energy as tiny bursts of light in Earth’s polar regions. The bombarding particles create a radiant aurora that appears as a wispy, ribbon through the sky.

The aurora borealis is an awe-inducing arc of color, stretched in a seemingly endless band hundreds or thousands of miles long. This oval-shaped band, called the Van Allen Belt, is a permanent component of the planet’s upper atmosphere, with its core centered on the magnetic north and south poles. In order to observe a truly dazzling auroral display, one must be standing below this band. Churchill is located in the heart of the aurora zone, right underneath this belt, and thus has one of the heaviest concentrations of auroral activity on Earth.

Although this dramatic light show may appear close when viewed from the Earth’s surface, the aurora is actually many miles away; the nearest it typically reaches is 50 miles from the ground with an uppermost extent of 400 miles above the planet's surface. 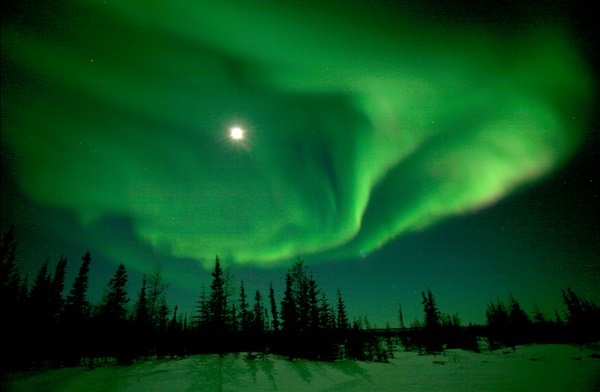 COLORS OF THE AURORA BOREALIS

The aurora is a swirling current of multicolored light. The color of the light depends upon which particular atoms collide with solar wind particles. The brightest, most common color of the aurora is green, which is produced by oxygen atoms about 60 miles from the surface of the Earth. A pink border sometimes seen below the green is created by neutral nitrogen atoms. Oxygen atoms high in the atmosphere, 200 miles away, give off a rare, red auroral color that can be spotted only by a trained eye.

The more active the sun is, the harder the solar wind blows, and the more brilliant the aurora borealis will be. An increased number of energized particles cause the atmosphere to glow brighter and sightings to occur more frequently. On a very cold, cloudless night in Churchill, long, powerful auroral displays may appear right over our heads.

But why do these lights appear less colorful in person than in an image captured by a camera? It has to do with the photoreceptors in the retina of our eyes. Rods are light-sensitive but not receptive to color. Cones, on the other hand, are very good at receiving color but are not sensitive to light. This combination means that humans are not well-adapted to see color at night. A camera—a digital instrument—is able to pick up the true vibrancy of the aurora in the sky. It’s our eyes that can’t quite match up. 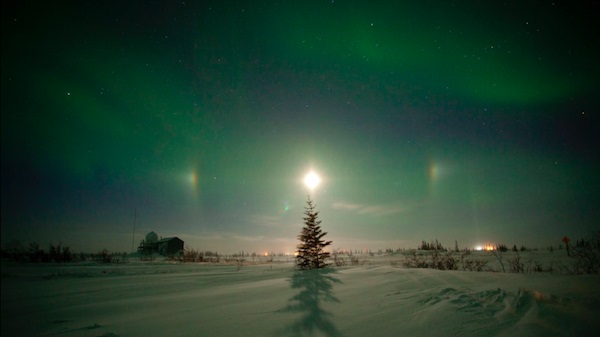 The moon hangs overhead, casting a silvery glow over the endless stretch of Arctic tundra below. Ice crystals swirl in the moonlight as the northern lights begin in a rippling, iridescent display. Luminous and mystical, the moon has long been a source of intrigue for wanderers, dreamers photographers. When combined with a northern lights show, the photographic results can be stunning.

Photographing the northern lights during a full moon or a new moon both have their advantages. Bright moons benefit photographs by creating a soft, diffused light. Photographers are able to shoot a foreground with no artificial light, without the use of flash, and without the resultant harsh shadows. Thus, if a photographer wants to capture scenery along with the northern lights, the full moon is the best time to shoot. One may even be lucky enough to photograph a moon dog, in which airborne ice crystals form a lunar halo around a bright moon. On the other hand, when the sky is exceptionally dark, with no trace of moonlight, one is able to see more stars, and the lights appear brighter. Thus, both moon phases have their advantages.

It is important to note that the moon rises and sets at different times during its 28-day lunar cycle. Unless it is the exact day of the full moon, moonrise may not occur until late into the night, and photographers could have the opportunity to shoot the lights in complete darkness. Moon or no moon, photographing a sky filled with undulating lights captures a moment of enchantment.

Churchill, Manitoba is one of the best places on the planet to view and photograph the aurora borealis—see it in comfort from our exclusive Aurora Pod featuring a 360-degree view of the night sky.
7 Days / Jan–Mar
From $6995 (+air)
~14
Photo Departures Available
Travel Stories