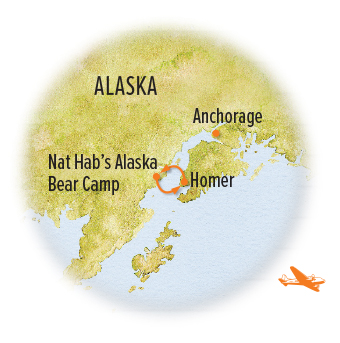 Day 1: Homer, Alaska
Arrive in Homer, a scenic fishing town of 5,500 on Kachemak Bay located near the bottom of the Kenai Peninsula. Known as “the end of the road,” Homer is the most southerly point on Alaska’s contiguous highway system. Surrounded by 280 acres of protected state land, this critical wildlife habitat sustains more than 100 bird species and a large local moose population. Homer’s key geographic feature is the Homer Spit, a 4.5-mile-long gravel bar that extends into the bay. Visitors to the town harbor frequently see fishing boats unloading their catch—Homer is heralded as the Halibut Capital of the World. This evening, gather with our Expedition Leader for a welcome dinner and orientation to the incredible bear adventures that lie ahead.

Day 2: Nat Hab's Alaska Bear Camp—Bear Viewing
Leave Homer on a private flight across Cook Inlet to Nat Hab's Alaska Bear Camp. The view from our chartered bush plane is staggering as we pass snow-clad volcanoes and jagged glaciers pouring down from icefields on high. The terrain below us, where the Aleutian and Alaska ranges meet, comprises Lake Clark National Park, some of the world's most critical brown bear habitat. Look for bears in the meadows and along the shoreline as we come in for a landing, taxiing down the beach. The exact timing of our arrival is dependent on the tides. Bear Camp is located on a historic homestead, a private inholding of coastal land surrounded by the roadless wilderness of Lake Clark National Park and Preserve. These 4 million protected acres are the ancestral homelands of the Dena'ina people, preserving an intact ecosystem at the headwaters of the largest sockeye salmon fishery in the world. Accessible only by plane or boat, Bear Camp is ours alone for an unparalleled immersion in pristine brown bear habitat.

Once we are settled in to our weatherproof tent cabins, we gather for an orientation and safety talk. Then...it's time to meet the bears! Here at Bear Camp, we have some of the best, most consistent viewing anywhere in Alaska, due to the season-long availability of food. In the spring, sedge grass awaits the bears as they emerge from their dens, protein-rich food that supports rapid growth. Bears also dig clams from the beach as they await their late summer feast: by late July or early August, the region's salmon runs help provide the fat that enables the bears to survive a long winter. All season long, nature serves a steady bounty to these omnivores. And since the bears are sated by this abundance, they see us humans merely as part of the scenery, allowing us to move safely in their midst on guided outings, at times observing them from just a few yards away. Two viewing platforms, one elevated for a territorial view, enable us to see bears nearby and at a distance. And we often watch them right from camp, which is surrounded by electrified wires, ensuring our safety on site. After an exhilarating day, gather in the dining tent for dinner—you'll be surprised at the outstanding meals our resident chef is able to prepare in such a remote location. Fresh local fare is always on the menu, including abundant Alaskan seafood.

Days 3 & 4: Alaska Brown Bear Experience
Prior to this rare opportunity, most of us will have seen bears only in zoos or nature documentaries. Yet there's nothing that comes close to this immersive experience, being among them in their wild home. Against a backdrop of sheer-sided peaks rising above the green valley floor, the bears are sometimes near enough that we can hear them chewing their food and communicating with one another in woofs, purrs and growls. Alaska's mighty brown bears—the coastal version of the interior grizzly bear (which is the same species, Ursus arctos)—are the largest land predators in North America. Adult males can weigh up to 1,500 pounds!

While the bear activity we witness will vary according to the season, weather conditions and timing of the salmon runs, and we can never predict exactly what bear behavior we'll witness, there's always something riveting going on. Earlier in the season, we might see mating activity. Later on, we could catch a sighting of mothers with playful cubs. Once the salmon start running by mid- to late summer, we may see bears fishing in streams. And while bears are usually plentiful right in the vicinity of camp, we also go into adjacent Lake Clark National Park for added variety. At every turn, we explore the area in the careful company of our Expedition Leaders, seasoned bear naturalists who offer thorough coaching in respectful "bear etiquette" to ensure your safety. Our low-impact presence ensures that we never disturb the bears, and they in turn grant us comfortable access to watch them go about their daily routines.

Day 5: Bear Viewing / Fly to Homer
Few travelers ever have such an encounter with solitude and wilderness on the scale that surrounds us here. The size of the landscape, the raw beauty, the profound silence—these things alone would make for a life-transforming experience. But the chance to watch Alaskan brown bears, these incomparable icons of the wild, on their turf, their terms...it's a wonder to have bears welcome us into their world. We have one last chance this morning to marvel at them, admiring their majesty and whimsy alike. And one thing is certain: no one leaves here unmoved by the bears' plight, intensely aware of the threats from mining, climate change and other potential impacts to the health of this vital ecosystem on which the bears rely.

All too soon, it's time to leave Alaska Bear Camp behind. Boarding our small bush plane, we taxi down the beach, bound again for Homer. We depart as ambassadors for the bears, our time among them leaving an indelible mark on us, inspiring us to do all we can to protect them. Time and weather permitting, there may be a chance to explore more of Homer this afternoon. Tonight we celebrate our adventures at a festive farewell dinner.

Day 6: Homer / Depart
Our Bear Camp adventure comes to a close today as we transfer to the airport for homeward flights.
Interested in extending your trip? Link it up with another adventure!
Repeater Layout : vertical
Ultimate Alaska Wildlife Safari 14
New Itinerary!