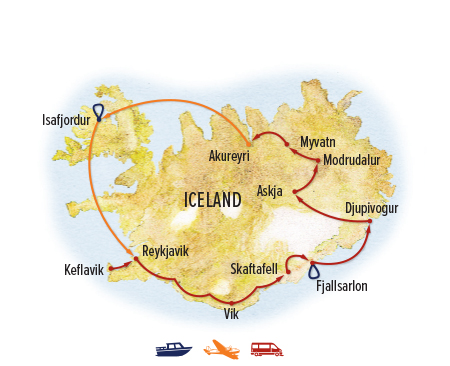 Day 1: Keflavik, Iceland / Reykjavik
Arrive at Keflavik International Airport where you are met on arrival and transferred to our hotel in Reykjavik, about a 45-minute drive. This evening, join our Expedition Leader for a welcome dinner at a local restaurant, with an orientation to all the adventures that lie ahead in this geological wonderland.

Day 2: South Shore/ Waterfalls / Vik
Explore Iceland’s south coast en route to Vik, an area known for its volcanic black sand beaches and countless waterfalls. We stop at several, including powerful Skogafoss and Seljalandsfoss, which we can actually walk behind and feel the spray. Our knowledge of Iceland’s dynamic geology is enhanced at the Lava Center, an interactive exhibition about the natural forces that have shaped this dramatic landscape. Continue to Reynisdrangar Rocks, a trio of columnar basalt sea stacks. Legend holds that they were formed after two trolls were out fishing in a three-masted ship. When the trolls did not return to their cave before sunrise, they and their vessel turned into needles of stone, since trolls cannot tolerate daylight. We are in the region affected by the 2010 eruption of Eyjafjallajokull volcano, and the Lava Show in Vik brings that cataclysm to life with a realistic recreation of a volcanic eruption complete with molten lava.

Day 3: Skaftafell—Glacier Walk or Park Hike / Private Zodiac Tour of Fjallsarlon Glacier Lagoon
Our focus today is Skaftafell, a national park now absorbed inside the larger Vatnajokull National Park established in 2008. Known for its rugged landscapes, mountains and glaciers, Skaftafell contains about half of the Vatnajokull Glacier, Europe’s largest ice cap. No roads penetrate the park’s wild recesses, but two options offer a chance to explore a slice of it: Choose between a walk atop a glacier or an easy hike. We then board a private Zodiac to explore Fjallsarlon Glacier Lagoon, a less-touristed opportunity to get close to giant floating icebergs. The lake is the meltwater from Fjallsarlon Glacier, a tongue of the massive Vatnajokull Glacier, which has calved the huge chunks of blue ice that drift on the surface.

Day 4: East Fjords / Modrudalur—Fjalladyrd Farm
Enjoy a day of cultural connections as we enter the East Fjords, a little-visited region of forests, farms and picturesque fishing villages. In the town of Djupivogur, admire the Eggs of Merry Bay, one of Iceland’s most unusual sculptures. Created in 2009 by Icelandic artist Sigurdur Gudmundsson, the 34 large-scale egg replicas represent 34 bird species found in the area, each one mounted on a platform along the harbor. Take a scenic walk along the coast near Alftafjordur, then join a local resident for a stroll around a historic fishing town, learning about daily life where traditions and livelihoods center on the sea. Continue on a remote road over Oxi Pass and through a rare tract of Icelandic forest, then stop for hot drinks and homemade snacks at an organic farm and cafe crafted of sustainably harvested local wood. We end up at Fjalladyrd, a hospitable family-run farm, for dinner and a two-night stay. This unique guesthouse allows us easy access to Askja volcano for our 4x4 adventure tomorrow.

Day 5: Askja Caldera Private Super Jeep Tour / Modrudalur
Set out in Super Jeeps this morning for a thrilling tour to Askja caldera. These large SUVs have been modified with big tires and extra shock absorption to provide a more comfortable ride over off-road terrain, allowing deeper access into Iceland’s central highlands. We ascend on foot to explore the massive Askja caldera, formed when the volcano erupted in 1875. Lake Askja, which fills part of the depression, is one of the deepest lakes in Iceland, at nearly 700 feet. The caldera contains several overlapping craters with active volcanoes beneath, including Viti, which warms a sulphuric blue-green crater lake. Following a picnic lunch, explore more sights of Iceland's less-visited Central Highlands, including a look into the foreboding Drekagil (Dragon) Canyon, defined by dark, twisted lava formations. Return to Modrudalur for a second night at Fjalladyrd.

Day 6: Dettifoss / Hverarond / Lake Myvatn
Witness the power of Dettifoss, Europe’s largest waterfall by volume and the most powerful cataract in Iceland. This thundering curtain of water, 330 feet wide and 150 high, is fed by the giant Vatnajokull Glacier. We frequently see rainbows, which make for dramatic photos. Next we explore the Hverarond geothermal area, an otherworldly setting of hissing steam vents, bubbling mud pots, cracked earth and pungent sulphur, then continue to Lake Myvatn. Formed during a massive eruption 2,300 years ago, the Myvatn region is still a site of geothermal activity, with lava flows coming most recently from the 1984 eruption of Krafla volcano. Numerous lava formations are found in and around the shallow lake, and we explore the pseudocraters of Skutustadir on a short hike. These phenomena are formed when lava flows over wet ground, pushing it down and trapping steam. As pressure mounts, steam explosions create these fascinating "false craters." One of the premier birdwatching areas in the world, Lake Myvatn’s marshes provide habitat for huge numbers of migratory birds in summer. More than 115 species have been seen at the lake, including 13 species of nesting ducks, and we take a walk to see some of them. We also visit Sigurgeirs Bird Museum, displaying specimens of all breeding birds in Iceland. Later today, we'll have the option to soak in a nearby hot spring.

Day 7: Myvatn on Horseback / Godafoss / Chartered Flight to Isafjordur
This morning, explore the fascinating lava formations around Lake Myvatn on horseback. This optional 1-hour ride offers a striking vantage point on the region's wondrous geological features, including whimsically shaped pillars and a close-up look at a false crater. Continuing westward, we stop at Godafoss, one of Iceland’s most beautiful waterfalls originating deep in the highlands. Shaped like a crescent, it drops 40 feet over a sheer volcanic cliff. Reaching Akureyri, connect with our late-afternoon chartered flight to Isafjordur, with scenic views of Iceland's indented coastline and glacier-carved interior en route. Originally settled in the 9th century, Isafjordur became a trading post for foreign merchants in the 16th century and today is the main town in the remote Westfjords in far-northwest Iceland.

Day 8: Exploring the Westfjords
The sheer isolation of the Westfjords region has kept it off the traditional tourist circuit, and we traverse it in depth over the next three days, adjusting our exact itinerary for weather and local conditions. We explore the wild hinterlands on an all-day 4x4 tour, stopping for walks, photos and a scenic picnic lunch. At Onundarfjordur, observe rich birdlife in the marshlands and shallow estuary at the head of the fjord. Continue to the village of Thingeyri and beyond, transitioning to dirt track around the Fjallaskagi Peninsula. High-clearance vehicles are essential for negotiating this rugged terrain as we circumnavigate the highest mountains in the area. Keep an eye out for Arctic fox, and look for pieces of petrified trees sticking out of the rocks alongside the narrow road—remnants of a forest that flourished in a much warmer climate thousands of years ago.

Day 9: Vigur Island—Private Whale Watching Excursion
From Isafjordur, we reach Vigur Island via a private boat ride, looking for whales and birdlife along the way. This small outpost is home to thousands of seabirds including Atlantic puffins, Arctic terns, black guillemot and especially eider ducks, the source of precious down from which the island’s sole resident family makes its living, collecting feathers in the spring and summer and cleaning and drying them during the winter. Just a handful of people inhabit the tiny island, and we join them for lunch in their home. You can also send a postcard here from Europe’s smallest post office. Our maritime adventure continues as we ply the intricate fjord system, searching for humpback and minke whales. Returning to Isafjordur, enjoy dinner at the Tar House restaurant, renowned for its fish stew and fresh Icelandic seafood. From our hotel, it's an easy walk back into town later this evening in the lingering light of Iceland's long summer days.

Please note: On later-season departures, puffins and other seabirds that nest here in summer will likely have migrated away from the area. Please check with an Adventure Specialist for further guidance about the best timing for bird viewing.

Day 10: Hornstrandir Nature Reserve / Hesteyri / Isafjordur / Reykjavik
This morning, explore part of the vast Hornstrandir Nature Reserve that can only be reached by boat. A wild, untouched realm of tundra, sea cliffs, flowering fields and ice, this 220-square-mile landscape in the most remote corner of Iceland has been protected since 1974. Across the the bay of Isafjardardjup, we get close to the sheer cliffs on Bjarnarnupur before slowly passing a striking rock arch that's home to cormorants and other seabirds. We then visit the abandoned village of Hesteyri. Nearly a hundred people once lived in this small settlement established in the early 1900s, but the last inhabitants made a collective decision to move away in the 1950s, finding life without roads or electricity ultimately too austere. Today, their descendants maintain many of the old houses as summer homes, and we stop for coffee and pancakes in the Doctor’s House. We'll also walk to the nearby ruins of a Norwegian whaling station that was abandoned in the early 20th century. Return to Isafjordur to depart on an evening flight to Reykjavik for a final night. Our farewell dinner will happen either in Isafjordur or Reykjavik, depending on the timing of our flight departure.

Please note: Activities in the Westfjords may take place on days or times that are different from what is shown on this itinerary, depending on local schedules, weather conditions, etc.

Interested in extending your trip? Link it up with another adventure!
Repeater Layout : vertical-2up
East Greenland Arctic Safari

Encounter raw Arctic beauty and witness climate change in action from our luxury expedition camp near the edge of the Greenland ice sheet. Explore by boat, kayak and on foot, where very few travelers ever venture.