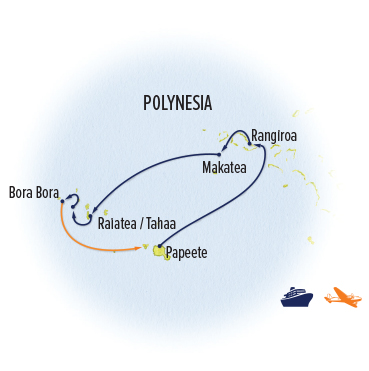 Days 1 & 2: Papeete, Tahiti, French Polynesia—Embark Ship
Depart from North America on an overnight flight to the island of Tahiti. Arrive in Papeete, capital of French Polynesia, the morning of Day 2 and proceed directly to our ship, the National Geographic Orion, for embarkation. Once you're settled in to your cabin, unwind on board or explore downtown Papeete on foot, including the central market where vendors sell fresh fruit, pareos, local arts and crafts, and coveted black pearls. Lunch is served aboard, and shortly after, we set sail for the Tuamotus. This afternoon, meet the staff and your traveling companions as we relax into island time.

Day 3: Rangiroa
Today we reach the Tuamotu Archipelago, about 220 miles northeast of the island of Tahiti. Our first port of call is the atoll of Rangiroa, a huge ring of 240 slender islands known for some of the best diving and snorkeling in French Polynesia. The turquoise lagoon at its center is the second largest in the world. Kayak, snorkel and scuba dive in these waters that are rich in coral gardens and marine life, home to large schools of pelagic fish, manta rays, dolphins, hammerhead sharks and endangered sea turtles. Rangiroa means "endless skies," a most apt name for this collection of islets under a vast expanse of cerulean blue.

Day 4: Makatea
An uplifted coral atoll in the Tuamotus, the island of Makatea is one of the most unique landforms in the Pacific. Tilted due to plate tectonics, it has dramatic vertical cliffs that ring its coastline, rising 260 feet from the ocean's surface—in stark contrast to other islands in the region. Its distinctive features have resulted in the name makatea being applied as a generic term for all other raised coral atolls worldwide. Spend the day exploring the island’s limestone caves and grottos with your expedition team and local guides, or search for endemic fruit doves and myriad seabirds.

Encircled by a single fringing reef and sharing a common lagoon, Raiatea and Tahaa are islands that beckon exploration. One of the most important cultural sites in the Polynesian world, the Taputapuatea marae complex on Raiatea was designated a UNESCO World Heritage Site in 2017. A political, ceremonial and funerary center for Polynesian seafaring culture for a thousand years, it is the location from which maritime explorers set out for Rapa Nui (Easter Island), Hawaii and New Zealand. Scattered throughout Polynesia, marae are known as holy sites where the world of the living and the world of the ancestors and gods converge. Continue to Tahaa for the afternoon, visiting a family-run vanilla plantation and snorkeling in the crystalline lagoons where we are likely to encounter gentle black-tipped reef sharks.

Days 6 & 7: Bora Bora—Disembark / Papeete / Depart
Be on deck at sunrise this morning to take in one of the most iconic images in the South Seas: the angular green crags of Bora Bora’s Mount Otemanu, the remains of an extinct volcano rising out of the aquamarine lagoon. Lying northwest of Tahiti and covering just 12 square miles, Bora Bora epitomizes the romance of the South Pacific.

While Bora Bora is most famous for its natural beauty, its cultural history is of interest as well: The island was inhabited by Polynesian settlers who crossed the ocean from Tonga and Samoa around the 4th century. Perhaps the greatest navigators of all time, it is astonishing to consider that Polynesians could confidently navigate the vast Pacific using the stars, wind and patterns of bird flight more than a thousand years before the first Europeans mastered sailing in their own waters. The first European sighting of Bora Bora was in 1722 by Dutch seafarer Jakob Roggeveen. Captain James Cook set foot on the island in 1777 after locating it earlier with the help of a Tahitian navigator, Tupaia. Bora Bora was an independent kingdom until 1888, when the French annexed the island as a colony and forced its last queen, Teriimaevarua III, to abdicate. During World War II, the United States chose Bora Bora as a South Pacific military supply base, although the island never saw combat. Spend the morning exploring this beguiling island, then return to the ship for lunch. In the afternoon, board a short flight back to Papeete where a hotel room is available for rest and refreshment before transferring to the airport for overnight flights home.