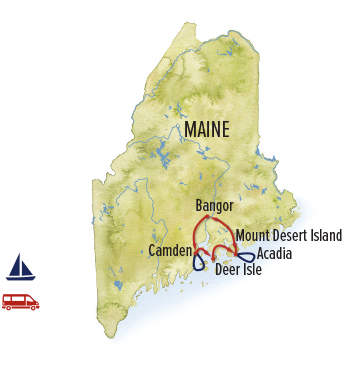 Day 1: Bangor, Maine
Arrive in Bangor, lying just inland off Maine’s central coast on the Penobscot River. The city’s strategic location on this important waterway ensured its status the “lumber capital of the world” in the 19th century. Transfer to our boutique hotel, a 200-year-old farmhouse converted to a romantic inn with gorgeous views of the surrounding forested hills which are bound to be glowing with autumn color. This evening, join your Expedition Leader for a welcome dinner.

Late this afternoon we continue to Camden, one of the most picturesque towns on the Maine coast, where we spend two nights. A popular mid-coast Maine destination, Camden hugs a snug harbor at the base of Camden Hills State Park, one of Maine's prime fall foliage areas. Our inn is optimally located in the compact downtown that’s filled with well-preserved 19th-century storefronts housing boutiques, galleries, antique shops and cafes.

Day 3: Private Schooner Sail / Beech Hill Preserve
Located on Penobscot Bay, Camden is one of Maine’s prized sailing meccas. Schooners, tall ships and sloops ply the bay, and this morning we take part in a thoroughly Maine adventure on a private 2-hour voyage aboard a historic windjammer originally launched as a racing vessel in 1918. View the tapestry of autumn foliage on the Camden Hills behind the town, plus elegant yachts and summer estates as we sail off the rockbound coastline. Penobscot Bay, studded with forested islands, is an especially scenic spot for maritime exploring.

Following a picnic lunch in the colorful wooded hills above the bay, we hike in Beech Hill Preserve, part of the Coastal Mountains Land Trust. The 300-acre nature reserve lies on the Maine Birding Trail and is home to 141 bird species including the eastern towhee, savannah sparrow and northern harrier. Originally an early 20th-century farm, today the preserve is managed for grassland bird habitat and organic blueberry production. Depending on the timing of our visit, the blueberry barrens may have turned bright crimson. From Beech Hill’s summit, survey Penobscot Bay and the Camden Hills.

Day 4: Penobscot Bay / Deer Isle
Follow Highway 1 along Penobscot Bay and down the Blue Hill Peninsula to Deer Isle. Although the distance from Camden is just 19 miles in a straight line, our route follows the nooks and crannies of the coastline for 70 scenic miles. Enjoy bucolic views of old barns in open meadows, shingled cottages that hug high bluffs, and lobster pots on docks in quiet coves. Before crossing the famous Penobscot Narrows Bridge, stop to survey the panorama over bay and islands from the observation tower 437 feet above the Penobscot River.

Once on the other side, enter a set-apart realm on sleepy Deer Isle. With its dense woods, pink granite shorelines, salty air and squawking gulls, this is quintessential Maine. The Island Heritage Trust manages more than a dozen different nature preserves on Deer Isle and offshore islets, and we’ll explore one or two this afternoon. Of special interest is Crockett Cove Woods Preserve, known as the “fog forest” because its towering fir and spruce trees trap heavy mists brought in from southwest winds over the ocean, nurturing ferns, mosses and lichens. Spend two nights at Pilgrim’s Inn, one of the oldest structures on the island, built in 1793. Dinner is sure to feature local seafood, and Deer Isle, with a fleet of 300 lobster boats, leads the state’s catch.

Day 5: Deer Isle / Private Cruise to Isle au Haut
Sailing from picturesque Stonington Harbor on Deer Isle this morning, take a private boat cruise to Isle au Haut, landing on the island to spend a couple hours ashore hiking and exploring. Isle au Haut, just 6 miles long and 2 miles wide, is home to a traditional community of 65 year-round residents, most of whom are employed in the fishing industry. A remote portion of Acadia National Park covers about half of the island. Return to Deer Isle in the afternoon for a kayaking or hiking excursion and more foliage viewing, depending on weather and sea conditions and the group's preference.

Day 6: Acadia National Park / Bar Harbor
The last stretch of our drive "Down East" brings us to Mount Desert Island and Acadia National Park, encompassing the highest rocky headlands along the U.S. Atlantic coast. Inhabited by the Wabanaki people for 12,000 years, the region was vied over by the French and British in the 18th century, and a century later, Mount Desert Island became a popular summer home retreat for America's wealthiest families. By the early 20th century, the impetus for conservation had established Acadia as a national park. Today, the park protects 47,000 acres of forest, mountains, lakes and ocean.

In fall, Acadia's woodlands become a variegated tapestry of color, with maple, birch and poplar interweaving bright red, orange and yellow among the dark conifers. Drive the Park Loop, stopping for clifftop views and photos, including a stop at Thunder Hole—when sea conditions are right, waves crash against the rock and water is forced through a crevice into a cave, creating a sound like a thunderclap. We exit the park for Bar Harbor, the classic resort town that is our destination for the next two nights.

Day 7: Acadia—Cadillac Mountain Sunrise / Private Lobster Boat Cruise
Rise before dawn to partake in Acadia's most iconic experience: watching the sunrise from the top of Cadillac Mountain. The highest point in the park is one of the easternmost locales in the United States, and thus one of the first to greet the sun's rays each morning. The view over Bar Harbor, Frenchman Bay, the Gulf of Maine and myriad islands is dramatic even without the pink glow of dawn. We return to town for breakfast, then investigate the less-visited southwest corner of Mount Desert Island. In the afternoon, a consummate Maine experience awaits: board a working lobster boat for a cruise around the island, enjoying views of rocky coast, lighthouses and small harbors in the crisp autumn air. This evening, get your fill of fresh Maine seafood one last time at our farewell dinner in Bar Harbor.

Day 8: Bar Harbor / Bangor / Depart
After breakfast, we depart Bar Harbor for the drive back to Bangor, a trip of a little over an hour. We travel directly to the Bangor airport to meet departing flights, which should be scheduled any time after 11:00 am.
Repeater Layout : vertical