Borneo has a tropical or equatorial climate with high humidity, hot temperatures and rainfall throughout the year. Temperatures during our adventure generally average between 86°F and 95°F during the day and 79°F to 84°F at night.

Kuching, the capital of Sarawak, is moderately hot, but very humid at times and receives substantial rainfall. Kuching is the wettest populated area (on average) in Malaysia with an average of 247 rainy days per year. The wettest times are during the Northeast Monsoon months of November to February, and the “dry” season is from June until August. Temperatures in Kuching range from 66°F to 97° and the average temperature is around 73°F in the early hours of the morning, which rises to around 91°F during mid-afternoon. The heat index often reaches 108°F during the dry season due to the humidity.

Kota Kinabalu, Sabah’s capital, has noticeably wetter and drier seasons. Two prevailing monsoons characterize the climate of this part of Sabah, the Northeast Monsoon and the Southwest Monsoon. The Northeast Monsoon occurs between November and March with cooler temperatures and less rainfall, while the Southwest Monsoon occurs between May and September, which brings warmer temperatures and more rainfall. Temperature variation throughout the year is small. 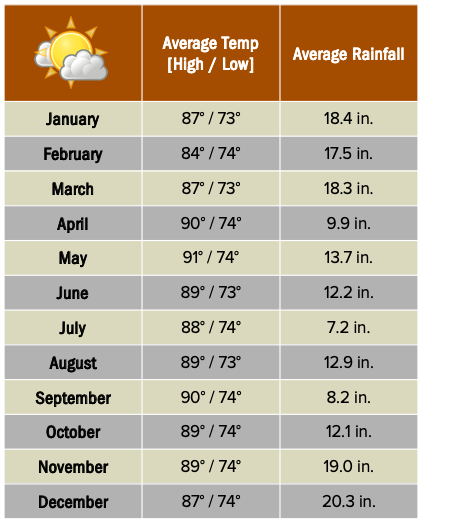 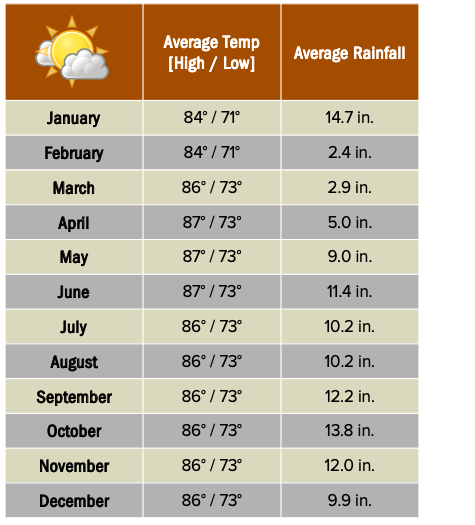