Photo Itinerary Aboard the Petrel 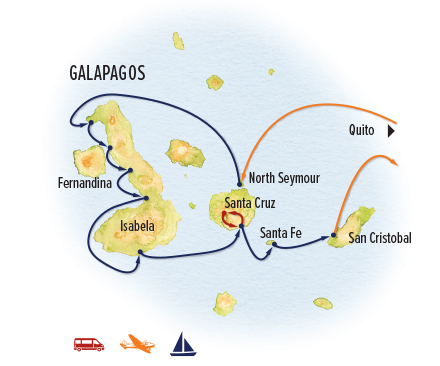 On this special photography departure, you'll maximize your opportunities for superlative photos of the Galapagos' legendary wildlife and landscapes. You'll benefit from exceptional personal attention and photography guidance, plenty of space for your gear, and flexibility to adapt to changing light, weather and wildlife conditions. Days start early to chase the best light, and we're able to linger at sites of interest or move to a new destination when desired. You'll travel with three Expedition Leaders: two expert naturalists and a pro photographer guide, all of whom are available to answer questions, offer tips and techniques, and help you better photograph the marvels of the Galapagos.

This itinerary was prepared on an exclusive basis by Natural Habitat Adventures. Should you choose to travel on an independent departure, your itinerary will be slightly different.

Day 1: Quito, Ecuador
Upon arrival at the airport in Quito, you’re met by our local guide and transferred to the city's historic center, about an hour away. Our boutique hotel is located in the heart of the colonial quarter where you can enjoy dinner on your own this evening at one of Quito’s many fine restaurants.

Embark on a full day guided photography tour of Ecuador’s capital. Heralded as Latin America’s best-preserved colonial city, Quito’s Old Town is a UNESCO World Heritage Site filled with cobblestone lanes, elegant plazas and monuments, and ornate gilded churches. Shoot a panorama of the city and surrounding volcanic peaks from Panecillo Hill, visit the 16th-century Church and Convent of San Francisco, and wander through San Francisco Square. Make a brief visit to Casa del Alabado Museum, a private archaeological collection of pre-Columbian artifacts dating back to Ecuador's oldest indigenous cultures. Marvel at the baroque splendor of La Compañia Church with its gleaming gold-leaf interior, and survey Independence Plaza, the original center of Quito from which we capture photos of the Archbishop’s Palace, Cathedral and Presidential Palace. Along the way, we’ll stop for a lunch of traditional Ecuadorian food. The afternoon is at leisure to find further photo opportunities on your own, including the traditional workshops along La Ronda, one of Quito’s oldest streets, where artisans craft everything from hats to wooden toys to fine chocolate. This evening, gather for a welcome dinner with one of our Expedition Leaders.

Day 3: Quito / Baltra, Galapagos Islands—Board M/C Petrel / North Seymour
Depart early this morning for the Quito airport where we meet our second Expedition Leader and board our flight to the Galapagos Islands. Landing on Baltra, we transfer to the pier where our deluxe motor catamaran, the Petrel, awaits. Settle in, then join our guides for a safety briefing and orientation to all the photography adventures that lie ahead. After lunch aboard, we make our first landing at North Seymour, a small geological uplift where we pursue photos of swallow-tailed gulls, blue-footed boobies and endemic land iguanas. North Seymour is also home to the Galapagos’ largest colony of magnificent frigatebirds. As we stroll along the beach, we find marine iguanas and sea lions bodysurfing the northerly swells.

Day 4: Isabela—Punta Vicente Roca / Fernandina—Punta Espinosa
Isabela is our destination today, the largest of the Galapagos Islands. Shaped like a seahorse, it was created when six volcanoes flowed together. Beginning at Punta Vicente Roca, take a panga ride along a shoreline brimming with wildlife at close range. Time permitting, we’ll snorkel at a spot where we frequently see sea turtles. Chances are good to spot Galapagos penguins, flightless cormorants, blue-footed boobies, brown noddies and Galapagos fur seals.

After lunch, Petrel crosses Bolivar Channel en route to Fernandina, the youngest of the Galapagos islands. From the deck, have your camera ready for shots of whales and dolphins, often on view in the passage. Fernandina has one of the most dynamic and pristine ecosystems on Earth, displaying vivid evidence of recent volcanic activity. Eruptions in 2018 sent lava flowing all the way to the sea, providing a stark backdrop for wildlife photos. We land at Punta Espinosa, where a surprising variety of life flourishes on the rope-like pahoehoe lava: flightless cormorants nest on the rocks and huge colonies of marine iguanas bask in the sun, while Galapagos hawks soar overhead. Bright orange Sally Lightfoot crabs pepper the black rocks at water's edge, contrasting with the turquoise sea. A snorkeling excursion offers a good chance to see sea turtles and submerged marine iguanas feeding on algae—consider bringing an underwater camera!

Day 5: Isabela—Tagus Cove / Urbina Bay
Back on Isabela, spend the morning in Tagus Cove where we can photograph graffiti dating to the 1800s, when pirates and whalers carved their ship names into the rock above a historic anchorage. Look for flightless cormorants on the shoreline and Galapagos penguins below the surface as we snorkel. Then, choose between two activities: a hike among the volcanic tuff cones for a closer look at the island's geological history and photos of Darwin's Lagoon, or a panga ride to shoot blue-footed boobies perched on the cliff ledges, as well as brown pelicans, brown noddies and flightless cormorants. At Urbina Bay this afternoon, witness one of the best examples of geological uplift in the archipelago, a phenomenon that occurs when molten rock beneath the surface suddenly shifts. In 1954, the shoreline was heaved upward nearly 15 feet, exposing coral and stranding marine organisms above the water on what is now the shore. Urbina is home to nesting sea turtles and a colony of some of the islands' largest land iguanas. We also have good chances to photograph Galapagos tortoises and a variety of Darwin's finches.

Day 6: Isabela—Elizabeth Bay / Punta Moreno
On the southern side of Isabela, Petrel enters Elizabeth Bay to explore a sprinkling of islets, a lagoon frequented by sea turtles, and surrounding red and black mangroves. On a panga ride, we’ll hope for photos of resting and feeding sea turtles along with lava herons, Galapagos penguins, rays and flightless cormorants. Sailing west to Punta Moreno, we observe several endemic species on the seemingly barren lava flows. The point is located between two volcanoes, Sierra Negra and Cerro Azul, and we step ashore to walk atop the hardened lava. At first glance, the corrugated rock landscape appears lifeless. However, the hard black surface is dotted with numerous shallow lagoons that harbor a wide variety of birdlife. Commonly seen species include flamingos, paint-billed crakes and white-cheeked pintails. We’ll also see endemic Galapagos flora taking root on this young, barren lava flow, including giant candelabra cactus, Palo Santo trees, carob trees and lichens. The protected waters of Moreno Bay are surrounded by mangroves—ideal habitat for sea turtles, which we may spy as we snorkel.

Day 7: Isabela—Sierra Negra / Puerto Villamil
Isabela, the archipelago’s largest island, formed by five volcanoes, is also one of the youngest, and a marvelous world within itself. The laid-back island town of Puerto Villamil is our home base for a variety of engaging photography options today. Wander trails through the wetlands just outside town, where lagoons, swamps, and mangroves are home to a variety of bird species such as common stilts, whimbrels, white-cheeked pintail ducks, gallinules and other shore birds. We may also visit the Giant Tortoise Breeding Center or the Wall of Tears, a penal colony that existed on Isabela between 1945 and 1959. For a more adventurous option, take an excursion to Sierra Negra volcano and shoot the vast caldera from the rim, one of the largest craters in the world at 4 miles across.

Day 8: Santa Cruz—Darwin Station / Natural Habitat's Tortoise Camp
Arrive at Santa Cruz where our day begins with a visit to Puerto Ayora, the island’s main town, to visit the world-famous tortoise-rearing center at Charles Darwin Research Station. Here, international scientists conduct research dedicated to conserving the unique habitats and species of the Galapagos. At the facility, visit the protection pens where hatchlings are bred to help increase depleted tortoise populations, a central mission for both the research station and Galapagos National Park. To date, more than 5,000 tortoises bred at the station have been released into the wild.

After time to explore town, followed by lunch back on board, we drive into the misty highlands of Santa Cruz to reach Nat Hab's private Tortoise Camp. This exclusive setting offers a rare opportunity to spend a night in wild tortoise habitat. and these ancient, gentle reptiles that are the archipelago's namesake often wander right through camp. Accommodations are in safari-style raised platform tents and treehouses with views of the ocean. While rustic, they offer comfortable amenities, including real beds and private en suite facilities. But the real treat of a stay here is the chance for easy close-ups of wild tortoises, which are attracted to the area's lush vegetation. They are most commonly seen in camp from July through February. From March to June, we make an excursion to a nearby tortoise reserve for closer views, as they migrate seasonally to a lower elevation. Please note: At times, Tortoise Camp may be closed due to poor weather conditions.

Day 9: Santa Cruz Highlands / Santa Fe
Spend the morning exploring a network of subterranean lava tubes and caverns adjacent to Tortoise Camp. Returning to Petrel, we'll have lunch aboard and sail for Santa Fe. On a short hike through a forest of prickly pear cacti, photograph the endemic land iguanas that wait patiently underneath for fruit to drop. We explore a small islet surrounded by great reef diversity, then set out for a cruise along Santa Fe’s north coast. Along this expanse, large cliffs and sea caves are used by many seabird species for nesting and roosting, as well as by basking green sea turtles and sea lions.

Day 10: San Cristobal—Disembark / Quito / Depart
This morning we land at Isla Lobos, where we take a short panga ride along the shore to photograph a frigatebird colony and walk inland to greet the resident sea lion colony. We’ll also hope to get shots of blue-footed and Nazca boobies. Continuing to San Cristobal, we disembark, and our Galapagos photo expedition winds to a close with our flight back to the mainland. On arrival at the Quito airport, travelers booked on overnight flights home may transfer to a hotel just minutes away, to refresh and relax in a comfortable day room before evening departures. A complimentary shuttle will return you to the airport in time for your nighttime flight.
Learn more about the seasonal variations of Galapagos weather and wildlife viewing.
Interested in extending your trip? Link it up with another adventure!
Repeater Layout : vertical-2up
Guided Machu Picchu Adventure
New Itinerary!


Click here to see your trip details PDF. You should also receive it by email momentarily.
/galapagos/galapagos-islands-adventure/itinerary/photo-itinerary/
Physical Requirements