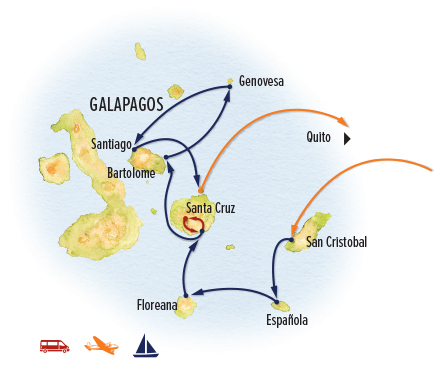 Day 1: Quito, Ecuador
Upon arrival at the airport in Quito, you are met by our local guide and transferred to the city's historic center, about an hour away. Settle into our boutique hotel in the heart of the colonial quarter, and enjoy dinner on your own this evening at one of Quito’s many fine restaurants.

Day 2: Exploring Historic Quito
After breakfast, embark upon a full day of discovery in Ecuador’s capital. Heralded as Latin America’s best preserved colonial city, Quito’s Old Town is a UNESCO World Heritage Site filled with cobblestone lanes, elegant plazas and monuments, and ornate gilded churches. On a guided city tour this morning, take in a panorama of the city and surrounding peaks from Panecillo Hill, visit the 16th-century Church and Convent of San Francisco, and wander through San Francisco Square. Make a brief visit to Casa del Alabado Museum, a private archaeological collection of pre-Columbian artifacts dating back to Ecuador's oldest indigenous cultures. Marvel at the baroque splendor of La Compañia Church with its gleaming gold-leaf interior, and survey Independence Plaza, the original center of Quito from which we view the Archbishop’s Palace, Cathedral and Presidential Palace. Along the way, we’ll stop for a leisurely lunch of traditional Ecuadorian food. The afternoon is at leisure: explore more of the city on your own, or visit the traditional workshops along La Ronda, one of Quito’s oldest streets, where artisans craft everything from hats to wooden toys to fine chocolate. This evening, gather for a welcome dinner with one of our Expedition Leaders.

Day 3: Quito / San Cristobal, Galapagos Islands—Board M/C Petrel
Depart early this morning for the Quito airport and our flight to the Galapagos Islands, landing at San Cristobal. Here, we meet our second Expedition Leader who accompanies us to the pier for the start of our Galapagos cruise aboard the stylish luxury catamaran Petrel. After settling into our cabins, join our guides for an orientation and safety briefing. After lunch aboard, we set off for an easy hike to the top of Frigatebird Hill where we’re rewarded with spectacular views of the coast, Kicker Rock, and the town of Puerto Baquerizo Moreno. Seabirds soar overhead, and we’re likely to see frigatebirds with their distinctive red chests.

A visit to the National Park Interpretation Center offers the perfect introduction to our voyage ahead as we learn about the history, ecosystems, geology, flora and fauna of the Galapagos. We might also see giant tortoises roaming through the semi-natural habitat on the premises. Back on board, sit down for dinner as we cruise off into the sunset.

Day 4: Española—Gardner Bay / Punta Suarez
Our first port of call is the island of Española, one of the most prolific wildlife sites in the Galapagos. In the morning, we visit an excellent snorkeling site off Gardner Islet with a colorful diversity of sealife near Tortuga Rock, and caves to explore by panga. Later, we land at Gardner Bay, with its long stretch of white sandy beach usually half-covered by a large colony of sea lions. Swim with them right from the beach, explore the bay by kayak, or just relax on the powdery sand where curious Hood mockingbirds sometimes peck at our sandals.

Cruising around to the other side of the island, we step ashore at Punta Suarez, where we find the greatest number of endemic species in Galapagos. From April to December, the huge waved albatross, found only on Española, performs its raucous mating ritual. Colonies of blue-footed boobies show off for potential mates while red-billed tropicbirds take shelter on the cliff walls. We also find Darwin's finches, Galapagos doves, Galapagos hawks, and a unique species of red and green marine iguana endemic to this island.

Day 5: Floreana—Punta Cormorant / Devil's Crown / Post Office Bay
This morning we land at Punta Cormorant on Floreana, one of the few populated islands in the Galapagos. Following a trail through a Palo Santo forest to a brackish lagoon, we find pintail ducks, common stilts and bright pink flamingos. As we wind our way past a rich variety of plants, we reach a beach of fine sand where sea turtles lay eggs in the dunes, and rays swim in the shallow water. Back aboard Petrel, we sail a short distance to Devil’s Crown, an eroded volcanic cone that is a roosting site for boobies, pelicans and frigatebirds. Snorkel above the sunken craters colonized by a brilliant array of corals and colorful fish. Rays, sea turtles, reef and hammerhead sharks and sea lions are also frequent visitors.

Floreana's rich cultural history is filled with intrigue, including tales of pirates who once hid out here. At Post Office Bay, we learn about a relic of this colorful past, the "Post Office Barrel." Established by British whalers in 1793, it's still a means for travelers to leave mail for personal delivery via visitors passing through. We can also snorkel right from the beach in search of sea turtles, rays and possibly penguins.

Day 6: Santa Cruz—Tortoise Breeding Center / Private Tortoise Camp
On Santa Cruz this morning, visit the Fausto Llerena Breeding Center, managed in a partnership between Galapagos National Park and the Charles Darwin Research Station. Learn about efforts by scientists, guides, rangers and park managers to conserve the UNESCO World Heritage Site that is the Galapagos. At the tortoise-rearing facility, see tiny babies bred to increase the depleted tortoise population, a central focus of the station's conservation mission. To date, the program has returned more than 5,000 tortoises to the wild.

Late this afternoon, ascend into the misty highlands of Santa Cruz to arrive at Nat Hab's private Tortoise Camp, where we spend the night. This unique camp, with safari-style tents and treehouses that offer distant views of the ocean, is tucked among lush vegetation that attracts native giant tortoises (most commonly seen from July through February). While our accommodations are rustic, they offer matchless proximity to wild tortoises in their natural habitat, and these ancient, placid creatures often amble right into camp. Nearby, explore a network of subterranean lava tubes and caverns. Please note: At times, Tortoise Camp may be closed due to poor weather conditions.

Day 7: Santa Cruz / Bartolome—Pinnacle Rock
We continue our exploration of Santa Cruz with a visit to a tortoise reserve in the highlands, or more time spent at our own Tortoise Camp, depending on where we might find more of these amiable reptiles. This afternoon, we return to the Petrel and sail on to tiny Bartolome, where we snorkel with penguins around the base of Pinnacle Rock. Gentle white-tipped reef sharks, sea turtles and stingrays are also common sightings. A climb to the island’s highest point offers 360-degree views as we pass intriguing geological formations such as spatter cones, tuff cones and lava tubes along the way. From the summit, a panorama unfolds of the surrounding islands and Pinnacle Rock, famously shown in the 2003 film Master and Commander. Those who prefer not to hike can take a panga ride along the shoreline, watching for rays and reef sharks just below the surface.

Day 8: Genovesa—Darwin Bay / Prince Philip’s Steps
Genovesa Island, also called Tower, is a collapsed shield volcano whose flooded caldera attracts vast numbers of pelagic seabirds that gather here to breed and nest. Inside the submerged crater thousands of great frigatebirds, red-footed boobies, swallow-tailed gulls, Galapagos storm petrels and yellow-crowned night herons create a cacophony of squawks. We anchor at Darwin Bay, formed thousands of years ago after the collapse of the volcano's roof. Surrounded by vertical cliffs, the bay is an ideal breeding site for the more than 1 million birds that congregate on Genovesa.

Our second landing is at El Barranco, also known as Prince Philip's Steps. This steep path with stairs carved into the rock leads to a plateau full of birdlife within a Palo Santo forest. Walk among colonies of great frigatebirds and Nazca boobies to a lava field where storm petrels nest in underground lava tubes. We may also see Galapagos doves, mockingbirds and perhaps an endemic short-eared lava owl.

Day 9: Santiago—Puerto Egas / Buccaneer Cove
At Puerto Egas on Santiago, we make an early-morning landing on a black sand beach with eroded rock formations. Following a trail across the dry interior, observe the remains of a salt mining enterprise before continuing along the coast. Tide pools are home to a variety of marine life, including sea urchins, octopus, sponges and sea stars. Birdlife abounds, with great blue herons, lava herons, oystercatchers, yellow-crowned night herons and seasonal shorebirds on display. In the lava grottos we find a colony of Galapagos fur seals, one of the only places in the Galapagos where we see these endemic animals from land.

Afterward, there's time to swim or snorkel from the beach with the resident sea lions. Snorkeling at Buccaneer Cove, which was once a refuge for British pirates, offers a glimpse of underwater rock formations, sea turtles, rays and reef sharks. If time allows, we’ll also visit Espumilla Beach, where we watch marine iguanas lounge while herons hunt for Sally Lightfoot crabs.

Day 10: Santa Cruz / Quito / Depart
Returning to Santa Cruz this morning, we visit Carrion Point, a sheltered lagoon on the north coast of the island at the entrance of Itabaca Channel. Snorkel or take a panga ride to explore the shimmering turquoise water, hoping to see white-tipped reef sharks, rays and sea turtles. As we say farewell to the Petrel’s captain and crew, it’s time to transfer to the airport for our flight back to the mainland. Upon arrival at the Quito airport, travelers booked on overnight flights home may transfer to a hotel located just minutes away, to refresh and relax in a comfortable day room before departure. A complimentary shuttle will return you to the airport in time for your evening flight.

Learn more about the seasonal variations of Galapagos weather and wildlife viewing.
Interested in extending your trip? Link it up with another adventure!
Repeater Layout : vertical
Guided Machu Picchu Adventure
New Itinerary!

Journey through Peru's Sacred Valley to the Lost City of the Incas, where our expert guide unveils this remarkable archaeological phenomenon.
6 Days / Year-Round, From $4395 (+air)
New Itinerary!
Amazon Lodge Extension

Explore Ecuador's Amazon Basin from a secluded jungle lodge and plumb the rich biodiversity of the rain forest on foot and by traditional dugout canoe.
4 or 5 Days / Year-Round / From $1695 (+air)


Click here to see your trip details PDF. You should also receive it by email momentarily.
/galapagos/galapagos-islands-adventure/itinerary/petrel/
Physical Requirements