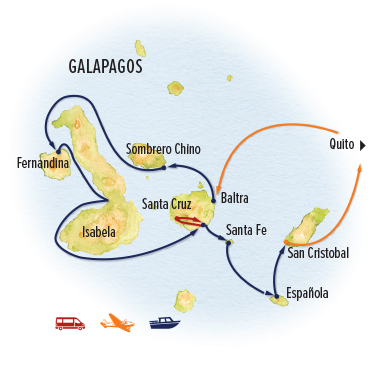 Day 1: Quito, Ecuador
On arrival at the airport in Quito, you are met by our local guide and transferred to the city's historic center, about an hour away. Settle into our boutique hotel in the heart of the colonial quarter and enjoy dinner on your own this evening at one of Quito’s many fine restaurants.

Day 2: Exploring Historic Quito
After breakfast, embark on a full day of discovery in Ecuador’s historic capital. Heralded as Latin America’s most beautifully preserved colonial city, Quito’s Old Town is a UNESCO World Heritage Site filled with cobblestone lanes, elegant plazas and monuments, and ornate gilded churches and monasteries. Our options are many today. Take in a sweeping view of the city and surrounding volcanic peaks from the overlook atop Panecillo Hill, then visit the 16th-century Church and Convent of San Francisco on San Francisco Square. Make a brief visit to Casa del Alabado Museum, a private archaeological collection of pre-Columbian artifacts dating back to Ecuador's oldest indigenous cultures. Marvel at the baroque splendor of La Compañia Church with its gleaming gold-leaf interior, and wander across Independence Plaza, the original center of Quito from which we view the Archbishop’s Palace, Cathedral and Presidential Palace. Along the way, we stop for a leisurely lunch of traditional Ecuadorian food.

The afternoon is at leisure to further explore the city on your own, or visit the  traditional workshops along La Ronda, one of Quito’s oldest streets, where artisans make everything from hats to wooden toys to chocolate. This evening, gather for a welcome dinner with one of our Expedition Leaders.

Day 3: Quito / Baltra, Galapagos Islands / Sombrero Chino
Return early this morning to the Quito airport for our flight to the Galapagos Islands. Landing on Baltra, we meet our second Expedition Leader who accompanies us to the pier where the Ocean Spray awaits. After settling into our cabins, we join our guides for a safety briefing and orientation to the adventures that lie ahead. After lunch aboard, we make our first landing at Sombrero Chino, a small island just off the southeastern tip of Santiago. Its Spanish name references the island's unique shape—like a traditional Chinese hat—formed by volcanic activity eons ago. The island is home to a colony of sea lions that frequent the white coral sand beach and remnants of volcanic rock. Our first snorkeling opportunity reveals some of the Galapagos' fascinating marine life, which may include a resident penguin family that often joins us for a swim.

Day 4: Isabela—Punta Vicente Roca / Fernandina—Punta Espinoza
Isabela, the largest of the Galapagos Islands, is our destination today. Shaped like a seahorse, it was formed when six volcanoes flowed together. Beginning at Punta Vicente Roca, we take a panga ride along a shoreline brimming with wildlife, and if time permits, we'll snorkel at a spot where we frequently see sea turtles. Chances are good for sightings of Galapagos penguins, flightless cormorants, blue-footed boobies, brown noddies and Galapagos fur seals. After lunch, Ocean Spray crosses the Bolivar Channel en route to Fernandina, the youngest of the Galapagos islands. From the deck, keep an eye out for whales and dolphins, often on view in the passage.

Fernandina has one of the most dynamic and pristine ecosystems on the planet, with vivid evidence of recent volcanic activity. Eruptions in 2018 sent lava flowing all the way to the sea, providing a stark backdrop for wildlife viewing. We land at Punta Espinoza, where a surprising variety of life flourishes on the rope-like pahoehoe lava: flightless cormorants nest on the rocks and huge colonies of marine iguanas bask in the sun, while Galapagos hawks soar overhead. Bright orange Sally Lightfoot crabs pepper the black rocks at water's edge, a vivid counterpoint to the turquoise sea. A snorkeling excursion offers a good chance to see sea turtles and submerged marine iguanas feeding on algae.

Day 5: Isabela—Tagus Cove / Urbina Bay
Back on Isabela, spend the morning in Tagus Cove where we find graffiti dating to the 1800s, when pirates and whalers carved their ship names into the rock above a historic anchorage. Look for flightless cormorants on the shoreline, and Galapagos penguins below the surface as we snorkel. Then, choose between two activities: a hike among the volcanic tuff cones for a closer look at the island's geological history, with views of Darwin's Lagoon, or a panga ride during which we may see blue-footed boobies perched on the cliff ledges, as well as brown pelicans, brown noddies and flightless cormorants.

At Urbina Bay this afternoon, witness one of the best examples of geological uplift in the archipelago, a phenomenon that occurs when molten rock beneath the surface suddenly shifts. In 1954, the shoreline was heaved upward nearly 15 feet, exposing coral and stranding marine organisms above the water on what is now the shore. Urbina is home to nesting sea turtles and a colony of some of the islands’ largest land iguanas. We also look for Galapagos tortoises and a variety of Darwin's finches.

Day 6: Isabela—Elizabeth Bay / Punta Moreno
On the southern side of Isabela, Ocean Spray enters Elizabeth Bay to explore a sprinkling of islets, a lagoon frequented by sea turtles, and surrounding red and black mangroves. On a panga ride, search for resting and feeding sea turtles along with lava herons, Galapagos penguins, rays and flightless cormorants. Sailing west to Punta Moreno, we observe several endemic species on the seemingly barren lava flows. The point is located between two volcanoes, Sierra Negra and Cerro Azul, and we step ashore to walk atop the hardened lava. At first glance, the corrugated rock landscape appears lifeless. However, the hard black surface is dotted with numerous shallow lagoons that harbor a wide variety of birdlife. Commonly seen species include flamingos, paint-billed crakes and white-cheeked pintails. We also see endemic Galapagos flora taking root on this young, barren lava flow, including giant candelabra cactus, Palo Santo trees, carob trees and lichens. The protected waters of Moreno Bay are surrounded by mangroves—ideal habitat for sea turtles, which we may spy as we snorkel.

Day 7: Santa Cruz—Darwin Station / Nat Hab's Tortoise Camp
On Santa Cruz this morning, visit the Fausto Llerena Breeding Center, managed in a partnership between Galapagos National Park and the Charles Darwin Research Station. At the tortoise-rearing facility, learn about efforts by scientists, guides, rangers and park managers to conserve the UNESCO World Heritage Site that is the Galapagos, and see tiny babies bred to increase the depleted tortoise population, a central focus of the station's conservation mission. To date, the program has returned more than 5,000 tortoises to the wild.

Late this afternoon, ascend into the misty highlands of Santa Cruz to arrive at Nat Hab's private Tortoise Camp to spend the night. Our unique camp, with safari-style tents and treehouses offering distant views of the ocean, is tucked among lush vegetation that attracts giant tortoises (most commonly seen from July through February). While our accommodations are rustic, the proximity they offer to wild tortoises in their native habitat is second to none. We view these ancient, placid creatures in their natural setting, and they often amble right into camp. Nearby, we can also explore a network of subterranean lava tubes and caverns. Please note: At times, Tortoise Camp may be closed due to poor weather conditions.

Day 8: Santa Cruz Highlands / Santa Fe
Roam the grounds of Tortoise Camp further this morning or visit a nearby tortoise reserve, depending on where we are likely to find more of these ancient Galapagos denizens—their location varies seasonally. Returning to the Ocean Spray, we have lunch aboard, then sail for Santa Fe, home to a large population of sea lions, lava lizards, the unique Santa Fe land iguana, and the Opuntia, or prickly pear, cactus. On a short hike through a cacti forest, look for endemic land iguanas that wait patiently underneath for fruit to drop. A panga ride along the island’s northern coast reveals large cliffs and sea caves used for nesting and roosting by many species of marine birds, as well as basking sea lions.

Day 9: Española—Punta Suarez / Gardner Bay / Osborn Islet
Española is one of the most prolific wildlife sites in the Galapagos. Estimated to be about 4 million years old, Española is far enough away from the other islands that it is home to the greatest number of endemic species in the Galapagos, as well as dramatic landscapes sculpted by millions of years of erosion. At Punta Suarez, we hike on the headlands in search of abundant birdlife, hoping to see Española mockingbirds, blue-footed boobies, nesting swallow-tailed gulls and Galapagos hawks. Española is also the world's main nesting site for the enormous waved albatross, with a wingspan of 7–8 feet.

Returning to our catamaran, lunch is served as we sail to Gardner Bay, famed for its long white-sand beach that's home to dozens of sea lions. Paddle a kayak or ride a panga along the island’s north shore to see a cliff formed by eroded cinder cones and layers of old basalt—prime habitat for giant cacti and many different bird species. Snorkel around Osborn Islet, just one of the many small islands offshore that invite underwater exploration. Look for Pacific green sea turtles, which also frequent the rocky part of the shoreline edging Gardner Bay. Or just laze with the sea lions on the idyllic beach as we spend a relaxing afternoon on the bay. Back on board, it's time for farewell cocktails and a final celebratory dinner.

Day 10: San Cristobal / Quito / Depart
On our last morning in the Galapagos, we disembark the Ocean Spray at San Cristobal, the island where Darwin first landed in 1835 and where the Galapagos’ first permanent settlements were established. A visit to the Galapagos National Park Interpretation Center provides concluding overview of the archipelago's history, ecosystems, geology and wildlife. We then transfer to the airport to board our flight back to the mainland. Upon arrival at the Quito airport, travelers booked on overnight flights home may transfer to a hotel located just minutes away, for a chance to refresh and relax in a comfortable day room before departure. A complimentary shuttle will return you to the airport in time for your evening flight.

Learn more about the seasonal variations of Galapagos weather and wildlife viewing.

Interested in extending your trip? Link it up with another adventure!
Repeater Layout : vertical-2up
Guided Machu Picchu Adventure
New Itinerary!


Click here to see your trip details PDF. You should also receive it by email momentarily.
/galapagos/galapagos-islands-adventure/itinerary/ocean-spray-2019-itinerary/
Physical Requirements