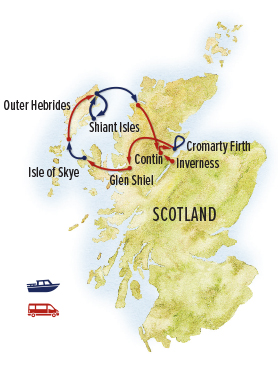 Day 1: Inverness, Scotland / Contin
Our Scotland nature adventure begins in Inverness, the largest city and cultural capital of the Scottish Highlands. From Inverness, a transfer is included to our historic country house hotel located just outside the village of Contin, about a 30-minute drive. Coul House, a grand stone manor house built in 1821, is the centerpiece of the Coul estate established by the Mackenzie clan in 1560. Gather for a welcome dinner with our Expedition Leader this evening.

Day 2: Black Isle / Cromarty Firth Private Cruise
From Contin, skirt the Black Water River east to Black Isle, which is neither an island nor black—it’s actually a small peninsula jutting into the North Sea and an inviting, little-known corner of Scotland that awaits our discovery today. From the village of Cromarty at the tip of Black Isle, board a private boat for an excursion into Cromarty Firth, a narrow inlet hemmed in by steep cliffs. This protected marine area is home to Scotland's best-known pod of bottlenose dolphins, the most northerly population in the world. Famously inquisitive, they sometimes swim right alongside our boat. Keep an eye out, too, for harbor porpoises, common and gray seals, and the occasional minke whale. Return to our boutique inn for a memorable dinner featuring contemporary Scottish cuisine prepared by Coul House's accomplished chef.

Day 3: Highlands Traverse via Loch Ness to Glen Shiel
Driving the length of the Great Glen past ruined castles and dramatic vistas, we skirt famous Loch Ness, one of the largest and deepest lakes in Britain. Watch for the outline of ruined Urquhart Castle on a rocky promontory above the lake, one of Scotland’s largest medieval fortresses and the site of a half-century of conflict. And keep an eye out for a glimpse of furtive Nessie, the sea monster of legend that is the subject of more than 1,000 eyewitness accounts.

We stop for a special presentation at Trees for Life, a rewilding project that seeks to restore the globally unique Caledonian forest that once covered much of interior Scotland. The predominantly Scots pine forest mixed with varied deciduous trees has been decimated over centuries, cleared for grazing and timber. Restoring the forest provides habitat for native species including red deer, pine marten, badger, beaver, red squirrel, wild boar, otter and the rare Scottish wildcat. Reaching the shores of Loch Cluanie, we near our accommodation in Glen Shiel, an old coaching inn that has long served travelers bound from the Highlands to the Isle of Skye. Ringed by scenic hills, the inn offers glorious views and cozy ambience.

Day 4: Exploring the Western Highlands
Surrounded by dramatic Highland scenery, we have a full day to explore the wild country out our door. Depending on the group’s interests, we may travel to Glenelg to see two famous brochs—some of the best examples of Iron Age defensive structures on the Scottish mainland. Our westward route crosses the winding pass of Mam Ratagan with spectacular views of the famous Five Sisters of Kintail. Sheer mountains drop straight to the sea as we wind our way through steep-sided glens rife steeped in history and legend. Watch for recently reintroduced sea eagles, too, as we reach the loch. This is the territory of Gavin Maxwell, author of Ring of Bright Water, who lived here with his otters and raised the profile of the Highlands in the consciousness of a generation.

Another option is a long moorland walk within Glen Cluanie. Along the shores of Loch Cluanie, we look for red deer, golden eagles and other raptors, enjoying solitude and expansive mountain views from a private estate. A third possibility is a tour to the National Nature Reserve at Beinn Eighe and the National Trust property at Glen Torridon, renowned for its magnificent mountain vistas and abundant wildlife.

Day 5: Isle of Skye / Harris
More wild Scottish scenery is in store as we make our way to the Isle of Skye and on to Harris in the Outer Hebrides. Journey through forest and moorlands, past lochs and trout streams, to reach the coast. We’ll stop for photos of evocative Eilean Donan Castle, one of Scotland’s most iconic sites. Strategically perched on a small island where three great sea lochs meet, the original 13th-century fortification was built to protect adjacent lands from Viking raids. At Kyle of Lochalsh, cross the famous bridge to Skye and continue northwest across the island through the Cuillins Mountains. En route, we’ll stop in a few small villages and visit the Old Man of Storr, a large, prominent rock pinnacle overlooking the sea that’s visible for miles. We’ll also view Kilt Rock, a 300-foot-high wall of towering columnar basalt, and the Quiraing, part of the Trotternish ridge that was formed by a massive landslide that created high cliffs, hidden plateaus and sharp rock outcrops. At the port town of Uig, board the ferry to Tarbert on the Isle of Harris, cruising in the gleaming light of evening. At our hotel in the heart of town, a late dinner awaits on arrival.

Day 6: Harris / Shiant Isles Seabird Cruise
The Isle of Harris is a diverse landscape of mountains and moorlands, crofts, lochs, meadows and sandy beaches. Its craggy coast, defined by cliffs and secret coves, offers nesting habitat for myriad seabirds. In high summer, discover the wildflower meadows that burst into color on the machair, a sparse veneer of green atop the sand. The single-lane “Golden Road” winds along the east coast of Harris among miniature fjords and tiny hamlets with Viking and Gaelic names. Along the way, we pass through historic rural settlements and stop at a weaving shop where world-famous Harris tweed is produced.

A highlight today is a private cruise to the Shiant Isles, one of the world's most famous seabird colonies. Located between Skye and Lewis, these columnar basalt islands are known in Gaelic as Na h-Eileanan Seunta, or the "Enchanted Isles." Though this tiny island group is uninhabited by humans, it is home to hundreds of thousands of seabirds, including a quarter-million puffins—2% of the entire global population. Some 7% of all razorbills in the U.K. also breed here, along with colonies of guillemots, cormorants, shags and great skuas. We often see seals lounging on the rocks, too. If the weather is fair, the option exists to extend our 5-hour voyage to include the southern Bays of Harris coastline, marked with several deserted villages. On the return voyage, explore the abandoned crofting community of Bhalamus, once the heart of a 19th-century sheep farm on the coast of Lewis. Continuing into Loch Seaforth, which forms the boundary between Lewis and Harris, view several more old settlements and look for golden and white-tailed eagles on the cliffs before returning to our hotel for teatime.

Please note: September and October departures will not visit the Shiant Islands, since the seabirds will have departed by this time. The boat cruise will explore more of the coast of Harris instead.

Day 7: Lewis—Callanish Standing Stones / Contin
This morning we visit one of Scotland's most intriguing archaeological sites, the Callanish Standing Stones. This 5,000-year-old ring of 13 gneiss pillars is arranged in a cruciform pattern around a 14-foot central monolith. Erected on the west coast of Lewis in the late Neolithic era, predating Stonehenge, the stones were a focus for ritual activity during the Bronze Age. Several other stone circles, arcs and alignments are also visible from the main site. Historians estimate the site was abandoned around 1,000 B.C. and ultimately buried beneath a thick layer of peat turf, not unearthed until 1857. We also visit a museum dedicated to the historical crofting life in the Hebrides before continuing to Stornoway, where we have lunch before boarding the ferry back to the mainland. The 2.5-hour crossing is an opportunity to look for dolphins and whales from the observation deck. On arrival in Ullapool we return directly to the Coul House Hotel, where our journey began.

Day 8: Scottish Wildcat Breeding Project / Canoeing
Visit the Scottish Wildcat Breeding Conservation Program at the Aigas Field Center, where we learn about efforts to conserve the United Kingdom's only native feline and most endangered mammal. Flanked by remnants of ancient Caledonian pine forest to the west and marine firths to the east, the center is an important educational site in the northern Highlands, dedicated to sharing Scotland’s wild natural heritage. Since 2011, this crucial national program has engaged in efforts to bring this small, muscular tabby cat back from the brink of extinction.

We then head deeper into the glen for a canoeing excursion, providing an intimate perspective on the rugged beauty of the Highlands. Depending on weather conditions and the group's composition, we'll either paddle the gentle Beauly River into steep-walled Aigas Gorge, watching for osprey overhead, or canoe on Loch Beinn a' Mheadhoin, a tranquil sea inlet with small islands and sheltered coves that beckon exploration as we scout for wildlife on the shoreline. The region is home to red deer, pine marten, golden eagles and many more species native to the area. Back at Coul House, celebrate our final evening together with a festive farewell dinner.

Interested in extending your trip? Link it up with another adventure!
Repeater Layout : vertical-2up
The Cotswolds: Exploring English Nature 12
NEW TRIP!

On walks through ancient beech forest and wildflower meadows, along hedgerows and trout-filled streams, delve into an idyllic rural landscape with a focus on native habitats, wildlife and conservation.
8 Days / May–July
From $8995
12
Photo Departures Available
NEW TRIP!