Fill out the form below to receive additional information about our The Cotswolds: Exploring English Nature or give us a call at 800-543-8917. 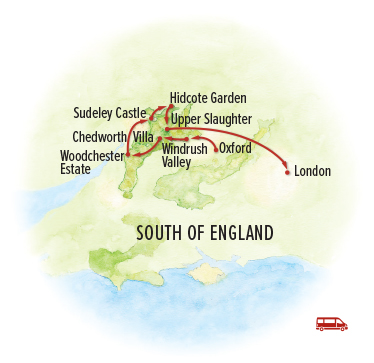 Day 1: Oxford, United Kingdom—City Tour / Minster Lovell
Our Cotswolds sojourn begins this afternoon in Oxford with a guided tour of England's most famous university town. Admire the architecture of the 15th-century Bodleian Library and Christ Church, the largest of Oxford’s colleges, founded by King Henry VIII in 1546, with its famous bell tower designed by Sir Christopher Wren. Leaving Oxford, we head west into the heart of the Cotswolds. This bucolic region, whose name comes from the Old English "cot" for sheep enclosure and "wold," meaning hill—“sheep pens among rolling hills”—spans 800 square miles and is protected as Britain’s largest National Landscape. Arrive at Minster Lovell, where a welcome dinner awaits at our inn. This perfectly preserved village of stone cottages with classic thatched roofs enjoys a romantic setting on the River Windrush.

Day 2: Windrush Valley Walk / Private Garden Tour
The Windrush Valley is one of the prettiest walking destinations in the Cotswolds. An easy path leads along the tranquil river through the postcard-perfect hamlets of Swinbrook and Asthall. In contrast to the Cotswolds' more heavily touristed towns, these are unspoiled villages that evoke the England of the imagination. Swinbrook is quintessentially Cotswolds with its stone walls, medieval church, cricket pitch with wooden pavilion, and an old stone pub next to the bridge spanning the river—the perfect spot to stop for a pint. The scenery is as bucolic as it gets, with the trail edging the trout-filled stream and skirting pastures filled with grazing sheep enclosed by dry stone walls. Expect abundant wildflowers in spring, a rich palette of warm colors in autumn, and varied bird sightings along the way. This afternoon, join esteemed garden historian Marion Mako who introduces us to some favorite garden properties, a behind-the-scenes look that typical visitors don't get. If time permits, wander around medieval Burford, whose high street filled with tiny shops, tea rooms and pubs rolls down a steep hill toward the River Windrush. Return to Minster Lovell for a second night.

Day 3: Chedworth Villa / Private Tour of Highgrove / Malmesbury
Travel this morning to Cirencester, known as Corinium in Roman times and bested only by Londinium (London) in terms of importance when Britain was part of the Roman Empire. A specialist-guided tour of Chedworth Villa reveals some of the most elaborate Roman antiquities in Britain. The site is preserved in the style of a Victorian archeological dig, and we'll see impressive Roman mosaics, bathhouse rooms, remnants of the steam heating system, and the Nymphaeum, still fed by water that filters through ancient Cotswold limestone. The hidden valley where Chedworth is located offers glorious rural vistas, with fields hemmed by stands of poplar, chestnut, rowan and whitebeam. The area abounds in sheep, whose wool made the Cotswolds wealthy in the Middle Ages, and numerous wildlife species inhabit the hedgerows. Raptor sightings are common, and we find scores of pheasants in season. Walk to Chedworth village and The Seven Tuns pub for lunch.

This afternoon, take a private tour of Highgrove House and Gardens, the country residence of HRH the Prince of Wales, who is an ardent supporter of wildlife conservation and rural landscapes in Britain. Such was his love for the landscape, history and people of the Cotswolds that Prince Charles chose to make this 1796 manor house his personal home. The gardens, 35 years in the making, reflect great diversity, from the genteel setting of the Sundial Garden to the unstructured beauty of the Wildflower Meadow. Later, browse the market town of Tetbury, famous for its antique shops, before continuing to our country manor to spend two nights.

Day 4: Slad Valley Walk / Private Tour of Woodchester Estate
A morning walk through the Slad Valley reveals an idyllic vale untouched by development, with four small nature reserves to explore. We look for deer, foxes, badgers and hedgehogs, but the real attraction is the sublime rural scenery. This region was once the heart of England's wool industry in the Middle Ages, which generated so much wealth for the Cotswolds. Our walk ends in the village of Slad at the famous Woolpack Pub, Laurie Lee’s local. Lee, a novelist and poet, is the Cotswolds' most famous author, raised in this tiny town that remains largely overlooked by tourism. Following narrow country roads across common land, we reach Coaley Peak, with views across the Cotswolds and into Wales. "Common land" was originally owned by the lord of the manor who allowed local people to graze their livestock and gather wood. Today it is managed by the National Trust as a resource for hikers, mountain bikers and dog walkers. The land is registered as a Site of Special Scientific Interest on account of the resident wildlife, including the Adonis blue butterfly, and various rare flowers including 13 species of orchid. Many archeological sites are present as well—Iron Age settlements, a Neolithic long barrow burial site, and evidence of Roman activity.

Arriving at the private Woodchester Estate, once a Tudor deer hunting ground, we tour the unfinished Victorian mansion before exploring the grounds, which include a 200-year-old boathouse. On a nature walk with a National Trust ranger, look for muntjac and roe deer, plus kingfisher, herons, and mandarin and tufted ducks around the lakes. Learn about important conservation efforts as the National Trust, which manages Woodchester, continues to restore the parklands to the original hardwood forest and pasture. We'll hear a talk on greater horseshoe bats and watch them roosting in the mansion via monitors. Then, as the sun sets, we'll see them fly off to hunt (in season) while trying our hand at using bat detectors outside at dusk. In addition to long-running research on these endangered bats, the badger population is also monitored here by the British government.

Day 5: Village Walks / Private Tour of Sudeley Castle & Gardens
Explore a collection of classic Cotswold villages this morning including Stanton, one of the most charming. Many of its cottages were built in the mid-1500s, and the church dates to the 9th century. Neighboring Stanway has a Jacobean manor house with a gravity-fed fountain that reaches heights of nearly 300 feet. This afternoon, encounter a thousand years of English history at Sudeley Castle. On a private tour with the castle archivist, follow in the footsteps of royalty as we learn about the castle's richly layered past. With the head gardener, explore highlights of its magnificent grounds, home to 16 rare and endangered pheasant species that are part of a breeding and conservation program at Sudeley. The grand Tudor estate occupies 1,200 acres protected for the natural beauty of the landscape, including 10 acclaimed gardens. The Four Queens Garden references the four female monarchs who visited the castle over the centuries. Among its many royal associations, Sudeley was visited multiple times by Henry VIII, and his last wife, Catherine Parr, is buried on the grounds. The castle has also hosted Queen Elizabeth I, King Charles I and King George III, who famously fell down a flight of stairs here. It was during his reign that America gained independence from the Crown. The castle was badly damaged during the English Civil War and fell into neglect but was eventually restored in the 19th century by wealthy industrialists whose heirs remain in residence today. Our visit is capped with a private dinner at the castle before continuing to the tiny hamlet of Upper Slaughter and our luxury country house hotel, where we spend three nights.

Day 6: Greystones Farm Nature Reserve / Hidcote Garden
Awaken this morning in one of the Cotswolds' most enchanting settings. The villages of Upper and Lower Slaughter have names that derive from the Saxon word slothre or sloh, meaning "slough" or "marshy place," rather than any grisly heritage. Connected by a peaceful mile walk along the River Eye, the villages look straight out of a fairytale with their tiny cottages, steepled churches, stone walls, trailing roses and picturesque old mill. Later this morning, tour Greystones Farm Nature Reserve to learn about sustainable agricultural practices. This small working farm has been designated as a Site of Special Scientific Interest for its floodplain wildflower meadows and the River Eye that flows through the property, creating habitat for otters, water voles and other wildlife. The milk from the farm's grass-fed cows is made into Single Gloucester cheese, allowing the farm to turn a profit while benefiting local wildlife.

Continue to Hidcote, a National Trust property regarded as one of the finest gardens in England. Hidcote's designer, Lawrence Johnstone, sourced plants for the gardens from around the world and donated the site to the National Trust in 1948—making it the first of many significant British gardens the Trust would acquire. To make the most of the natural light and avoid crowds, we have a private introduction to the gardens in the late afternoon and remain for an evening meal when the property closes to the general public.

Day 7: Exploring the Rural Landscape / Cotswold Falconry Center
As we weave our way through more bucolic landscapes, we'll observe how the traditional rural heritage of the Cotswolds has shaped the region over the centuries. More than 80% of these rolling hills are agricultural land, and the original wealth of the region came through the wool industry. Nature here has been managed and conserved by the farming community, which continues its commitment to careful stewardship and sustainability today. Keep an eye out for native wildlife that may peek from the hedgerows that line country lanes—we may see songbirds, butterflies or, if we're especially lucky, an elusive hedgehog.

On a visit to the Cotswold Falconry Center, learn about the more than 130 birds of prey of 60 different species, including Cotswold natives like sparrowhawks, common kestrels, red kites and peregrine falcons, and other raptors that are critically endangered in the wild. Watch birds of prey in flight and hear about how different species hunt and catch their prey. Since its founding in 1988, the center has made raptor conservation its mission, and in the breeding aviaries, we may see nest sites for critically endangered species.

An early morning transfer is included to London's Heathrow Airport, about a 90-minute drive. If you choose to remain in the region for further exploration on your own, consider a visit to the UNESCO World Heritage Site of Blenheim Palace, the Roman city of Bath, and Shakespeare's childhood home of Stratford-upon-Avon—all are nearby.

Please Note: While all activities listed on our itinerary will be included, some may take place on days or times that are different from what is shown, depending on local schedules.

Explore coast and mountains, from the Outer Hebrides to the Highlands—discover a land of lochs, whales, seabirds, wildflowers, granite islands and prehistoric cultures.
9 Days / May–Sep / From $9895
Limited to 12 Travelers
New Active Walking Options!


Click here to see your trip details PDF. You should also receive it by email momentarily.
Ask a Question
Fill out the form below to receive additional information about our The Cotswolds: Exploring English Nature or give us a call at 800-543-8917.
Download Trip Details
Receive our handy trip PDF by email and have everything you need at your fingertips, including highlights of the trip, itinerary, accommodations, and full details on dates, prices and logistics.


Click here to see your trip details PDF. You should also receive it by email momentarily.
/europe/cotswolds-england-nature-tour/itinerary/
Physical Requirements