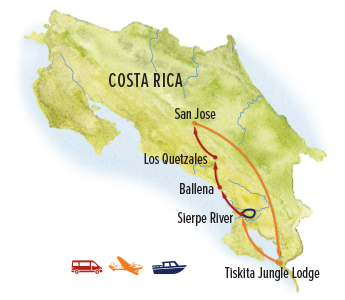 Day 1: San Jose, Costa Rica
Arrive in the capital of San Jose where our Costa Rica ecotour begins with a welcome dinner. If you reach the hotel early, enjoy a walk around the lavish gardens, home to abundant birdlife.

Days 2 & 3: Tiskita Jungle Lodge
Transfer to the local airport this morning to board chartered planes for our direct flight to Tiskita Jungle Lodge on Costa Rica’s remote southern Pacific coast. At the heart of private reserve, Tiskita is the only lodging in this undeveloped area just a few miles from the Panama border. Its hand-built cabins, crafted from fallen hardwood trees, survey the sea from a high ridge. Wildlife abounds: look for squirrel monkeys, howler monkeys white-faced capuchins swinging through the trees, sloths clinging to high branches, and agouti in the underbrush. More than 275 bird species thrive in this lush habitat, and we look for them on early-morning walks. A coveted sighting is the scarlet macaw, successfully reintroduced by Tiskita's owners and now flourishing on the reserve.

Meals are prepared with fresh local ingredients, utilizing some of the 125 types of organic tropical fruit grown on the estate. On a hike through the grounds, we'll examine a wide array of fruit trees, and, if certain fruits are in season, we may get to taste some exotic varieties. This is also an excellent chance to see birds and monkeys attracted to the orchards and open areas. An in-depth hike reveals more wild creatures, while a night walk offers a chance to look for red-eyed tree frogs, tiny endangered granular poison dart frogs and other intriguing amphibians. During our stay, we'll walk to the beachside village of Punta Banco to visit a community sea turtle hatchery in the company of a local leader running this grassroots conservation program. Learn firsthand the critical value of controlled hatcheries that are helping to increase endangered sea turtle populations worldwide. For groups visiting during turtle-hatching season from November–January, we may have the opportunity for a pre-dawn visit to the beach to see baby olive ridley turtles emerging from their nests and being released to the sea.

Day 4: Sierpe River Private Cruise / Finca 6 Stone Spheres
Fly from Tiskita to Palmar Sur on a chartered flight this morning, then drive along the central coast to reach the Sierpe River for a private boat cruise into its vast mangrove ecosystem. The Terraba and Sierpe rivers flow from their headwaters on the southern slopes of the Talamanca Mountains to the Pacific where they form a delta comprising the Terraba Sierpe National Wetlands. A network of channels weaves through Costa Rica's largest mangrove estuary, protecting prolific birds and wildlife within the 67,000-acre reserve. Floating down the languid tropical river, we may see American crocodiles, rainbow boas, green iguanas, white-face capuchins, long-nosed bats, roseate spoonbills, ospreys, kingfishers, frigatebirds and a variety of egrets. If we're lucky, we might also spy some scarlet macaws in the trees.

After lunch in Sierpe Town, we visit the Finca 6 archaeological site at Palmar Sur. At this UNESCO World Heritage Site, observe the mysterious pre-Columbian stone spheres discovered here in the 1930s when the United Fruit Company was clearing land for banana plantations. These perfectly carved orbs range in size from a bowling ball to massive globes weighing 16 tons. Their purpose and how they were created remains open to speculation, but one thing is certain: they are impressive! Late this afternoon, arrive at our hillside hotel high above Ballena Marine National Park, a system of coral reefs and islands that harbors some of the richest undersea life in Costa Rica. Hiking paths leave from the hotel grounds, offering a chance to look for wildlife, including howler monkeys and green iguanas.


Day 5: Hacienda Baru / Bahia Ballena
The 800-acre Hacienda Baru National Wildlife Refuge protects large tracts of lowland rain forest, mangroves, wetlands and secondary growth, which we explore from a network of easy trails. Scientists at the conservation biology center on the refuge research plants and animals found within its bounds and surroundings habitats, including woolly opossum, anteater, sloth, armadillo and ghost bat, plus white-faced, spider and howler monkeys. Keep an eye out for northern raccoon and kinkajou, as well as abundant reptiles.  Birdlife is impressive, with nearly 400 recorded species. After lunch, join our Expedition Leader on a walk to Uvita Beach, part of Ballena Marine National Park. The little-visited stretch of sandy coast is famous for its whale’s tail shape, surrounded by the turquoise sea. If surf conditions permit, swim or dip your feet in the ocean. Back at our hotel, take advantage of outstanding sunset photo opportunities with a sweeping view over the ocean, before dinner on the terrace.

Day 6: Talamanca Mountains / Savegre River
For those who wish to rise early, our Expedition Leader offers guided birdwatching on the hotel's expansive grounds. After breakfast, leave the coast to ascend narrow, winding roads into the Talamanca Mountains. our route, cross Cerro de la Muerte, the highest point along the Costa Rican section of the Pan-American Highway. The views are thrilling, when the frequent mists clear enough to reveal waterfalls on steep slopes and green valleys far below. Along the way, we stop for lunch at the home of a local family, savoring traditional home-cooked fare and learning about rural life in Costa Rica. Our hosts live on a small farm where they grow mushrooms on oak logs and make delectable blackberry wine, both of which feature in our meal.

Our destination is the cloud forest along the Savegre River, which rushes down a narrow, high mountain valley at 7,200 feet. Our lush surrounding are replete with flowering tropical plants and myriad colorful birds—the resplendent quetzal is the biggest prize among the more than 600 different bird species found here. On a guided hike through the forest, pass vivid bromeliads and orchids while we scout for wildlife. This region is home to Baird’s tapir, wild boar, monkeys and coati. The rich habitat is also the territory of six species of neotropical cats including jaguar, puma, ocelot, margay, oncilla jaguarundi, though they remain carefully hidden and are very rarely seen. Ferns and mosses flourish in the constant drip of the mists, while birds add dashes of color to the canopy.

Day 7: Los Quetzales National Park
This high-altitude ecosystem will thrill bird lovers, as it is home to a multitude of vibrant species and many endemics. We set out early this morning with the goal of spotting the resplendent quetzal, a revered and endangered creature of striking beauty. Listen for their deep, melodious calls as we quietly track these elusive birds. Photographers come from all over the world in hopes of capturing a shot of the quetzal's splendid plumage, with its electric green head, scarlet breast long, iridescent turquoise tail. Our dawn nature walk reveals a wide array of birds, and we may also spy the emerald toucanet, chlorophonia tanager, among many others.

Return to the lodge for breakfast, then depart for Los Quetzales National Park, encompassing more than 12,000 acres of pristine cloud forest and 14 different ecosystems. The park protects wild sections of the Savegre River, which originates high up on the Cerro de la Muerte. A highlight is at Paraiso Quetzal—"Quetzal Paradise"—an ecolodge perched on a steep mountainside. From the outdoor we're sure to see dozens of hummingbirds buzzing around several feeders, offering superb close-up photo opportunities. Later this afternoon, we'll visit Batsu Gardens, where every detail has been intentionally designed to enhance outstanding bird photography opportunities in a lush natural space. This evening, our nature adventure comes to a close over a farewell dinner at the hotel.

Day 8: San Jose / Depart
After breakfast, a group transfer is provided to the San Jose airport to connect with departing flights or an onward journey to Arenal Volcano for travelers who have booked that extension.

Interested in extending your trip? Link it up with another adventure!
Repeater Layout : vertical-2up
Natural Jewels of Costa Rica ~10
New Itinerary!