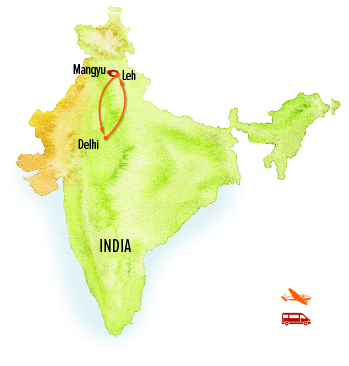 Day 1: New Delhi, India
Arrive in India’s capital, steeped in centuries of layered history, and transfer to our luxurious hotel in the suburb of Gurgaon, outside the city center. This elegant contemporary low-rise hotel is surrounded by 7 acres of gardens, courtyards and reflecting pools, lending a resort-like ambience. This evening, join our Expedition Leader for a welcome dinner and preview of our journey into the Indian Himalaya and the realm of Panthera uncia, the snow leopard.

Day 2: Delhi / Leh, Ladakh
Early this morning, we fly north to the former Himalayan kingdom of Ladakh. This is one of India’s least-populated regions, known for dramatic peaks, monasteries filled with golden Buddhas, and the elusive snow leopards that prowl the snowfields of an otherwise rocky, arid mountainscape. Once we touch down at 11,500 feet in the capital city of Leh, our high-altitude acclimatization begins. For centuries, Leh was a crossroads for Indus Valley trade between Tibet, Kashmir, India and China—routes that carried salt, cashmere wool, indigo and silk. The local people are ethnic Tibetans who speak Ladakhi, and Buddhism and Islam have co-existed peacefully here since the 8th century. Our lodging in the heart of this ancient city sits in the shadow of an unoccupied 17th-century palace designed to evoke the Dalai Lama’s former residence in Lhasa—the famous Potala Palace. The rest of the day is at leisure as we settle in and adjust to the high elevation.

Day 3: Leh—Exploring the Indian Himalaya
Today we travel into Leh's rural surroundings, exploring the rugged Indus River Valley. It's easy to see why this enclave at the northern tip of India is often called “Little Tibet,” as we cross passes marked with colorful prayer flags beneath soaring Himalayan peaks. Driving east toward 17,582-foot Taglang La—a pass traversed by one of the highest roads on Earth—we enter the realm of nomadic Changpa cattle and goat herders, discovering some of Ladakh’s oldest villages tucked into the foothills and floodplain of one of the world's longest rivers. Amid this wild landscape, keep a sharp eye out for blue sheep, golden eagles, bearded vultures, red-billed choughs and Tibetan partridge. We stop to visit the village of Gya, which sits at 16,000 feet and is home to farmers and shepherds who graze yaks, sheep and goats. As we pass through other small towns like Lhhato and Meru, marvel at the geological formations along our route, which erupt from colliding tectonic plates. Today we'll also hear from experts at the Snow Leopard Conservancy as we learn about looming threats to this top predator, and conservation strategies to protect this vulnerable species that also serves as an important indicator of the health of its lofty habitat.

Days 4–8: Snow Leopard Tracking from Mangyu—Private Expedition Lodge
Venture deep into the snow leopard's realm as we follow the Indus River westward. This region is the gateway to an expansive landscape ruled by the “ghost of the mountains”—a name bequeathed upon the snow leopard for its solitary and elusive nature. As we head up the narrow Ulley Valley toward the village of Mangyu and our snow leopard expedition base, be on the lookout for ibex, noted for their magnificent horns, standing vigil over rocky outcrops and couloirs.

Over five days, we will search the mountains for snow leopards. These trans-Himalayan cats have evolved to thrive in some of Earth’s harshest alpine terrain, mostly above tree line and up to 18,000 feet in elevation. Our base for exploration is a private expedition lodge overlooking the Mangyu Valley, on the edge of a remote settlement. Our nearest neighbors include a monastery and a smattering of traditional Ladakhi homes. The surrounding sheer cliffs and broad meadows provide habitat for three large ungulates—bharal, ibex and urial—along with fox, hare, pika and packs of Tibetan wolves. In the valley's narrowest reaches, steep walls and side streams sustain a healthy population of ibex that lures snow leopards capable of killing prey up to three times their own weight.

For our best chance to spot a snow leopard, we rely on the expertise and keen eyes of a team of local spotters, plus our naturalist Expedition Leader. These seasoned trackers scour the landscape early each morning to help us plan our route for the day and increase our luck of seeing these cats whose camouflage enables them to blend in seamlessly with their habitat. We also retain radio contact with trackers throughout the day so we know when snow leopards wander into our area, and private vehicles maximize our flexibility to move to where the snow leopards are. Typically, we spot them on high ridges around our lodge or within a short walk from the vehicles, but longer hikes are available for those who desire. In between excursions, the lodge offers an idyllic respite for warming up with hot chai. Nearby are intriguing Ladakhi cultural sites like the elaborately painted Gon-nila-phuk Buddhist meditation caves of Saspol, which we may have an opportunity to visit during our stay.

Day 9: Mangyu / Leh—Visit to Alchi Gompa
After breakfast, say farewell to our gracious Ladakhi hosts whose lodge is helping to enhance protection for snow leopards in the area. These majestic cats face threats from habitat loss due to climate change, reduced prey, poaching and human conflict, and we leave knowing we’re making a difference for their future with our economic contribution and our advocacy. Following the winding road back to Leh, stop to visit Alchi Gompa, a lowland monastic complex built between 958 and 1055 A.D. on the south bank of the Indus River. One of northern India’s earliest Buddhist learning centers, it contains some of Ladakh’s oldest surviving paintings that reflect the reign of both Buddhist and Hindu kings from neighboring Kashmir and Himachal Pradesh. Visit the two main temples with huge Buddha statues and elaborate wood carvings, plus the dukhang where monks worship beyond a veranda lined with frescoes of a thousand Buddhas. In Leh this evening, we share our reflections over a farewell dinner.

Day 10: Leh / Delhi / Depart
Fly from Leh to Delhi this morning and transfer to our luxury hotel where day rooms are reserved for the remainder of the afternoon. A lavish buffet lunch awaits, followed by time to relax among landscaped gardens and pools. A transfer to the international airport is included to meet departing flights this evening.

Interested in extending your trip? Link it up with another adventure!
Repeater Layout : vertical
The Grand India Wildlife Adventure 11