Pretty much everyone knows by now that the strange creatures that Charles Darwin encountered in the Galapagos Islands in the early 19th century played a crucial role in the development of his world-changing theory of evolution by natural selection. One of the remarkable things about these islands is that the vast majority of the species that inspired Darwin are still around today—living, crawling, soaring, slithering proof of his eloquent idea that an organism that is better adapted to its environment is more likely to reproduce and pass along its traits. The process has given rise to every species that has ever lived. Here are just a few examples of astounding adaptations in Galapagos animals that have served them well.

1. A finch that drinks blood 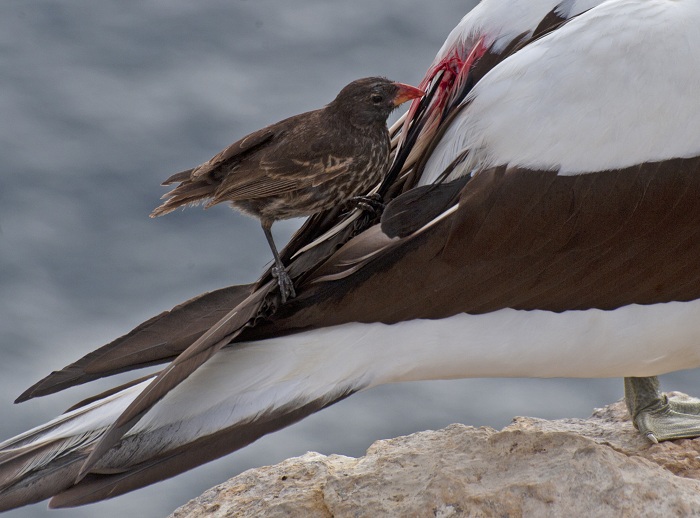 There are 13 species of Darwin’s famed finches in the Galapagos. Each evolved from a single common ancestor, through a process known as adaptive radiation, in order to exploit a new and different ecological niche. While the species all look alike to the untrained eye, each has a slightly different beak, in terms of its size and shape, which allows it to take advantage of a particular food source. For example, thick, crushing beaks are good for eating seeds and nuts, and long, probing beaks are adapted to eating insects. The vampire finch, a distinct subspecies of the sharp-beaked ground finch, may take the cake for the most interesting (and macabre) adaption among Darwin’s finches. It uses its sharp, pointy beak to drink the blood of other birds, such as Nazca and blue-footed boobies. A finch pecks at a booby’s skin until blood is drawn and then drinks it. Strangely, the booby doesn’t seem to mind. Scientists think that this may be because of an earlier symbiotic relationship between the birds; finches likely pecked at boobies in order to groom them of parasites.

2. A finch that makes and uses tools 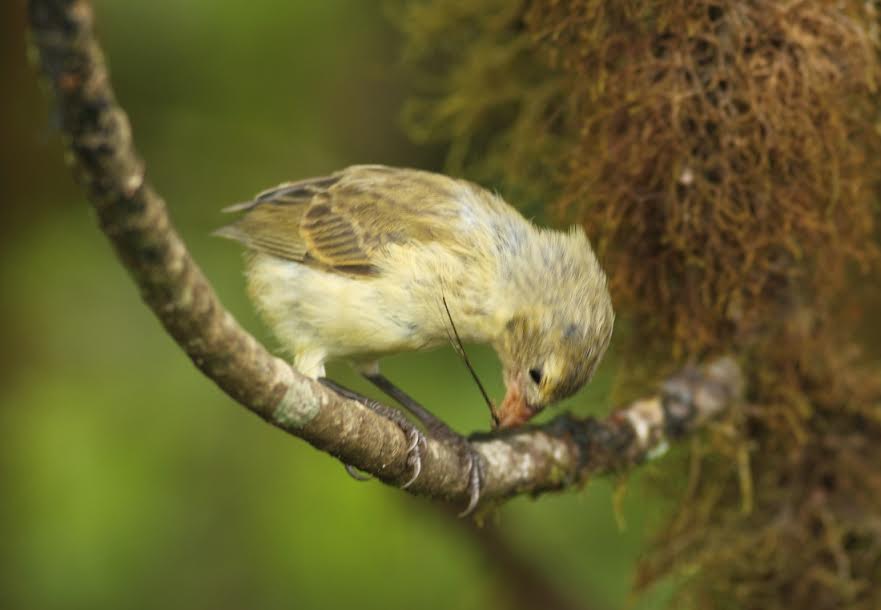 If drinking blood wasn’t cool enough for you, how about a finch that makes and uses tools? When a woodpecker finch finds insects in the bark of a tree that it can’t get at it with its relatively long, pointy beak, it may fly off and retrieve a cactus spine, which it uses to drive the insects out or even impale them. Researchers estimate that up to half of the finch’s prey is caught through some type of tool use, which makes it a more prolific and effective tool user than the chimpanzee. Even more remarkably, if a particular tool doesn’t get the job done, the woodpecker finch will actually modify the tool (e.g., removing leaves from a twig) to make it work, which means it’s a bona fide toolmaker as well. There are reports of woodpecker finches brandishing twigs as weapons. Better watch out, vampire finch!

3. A reptile that gets shorter 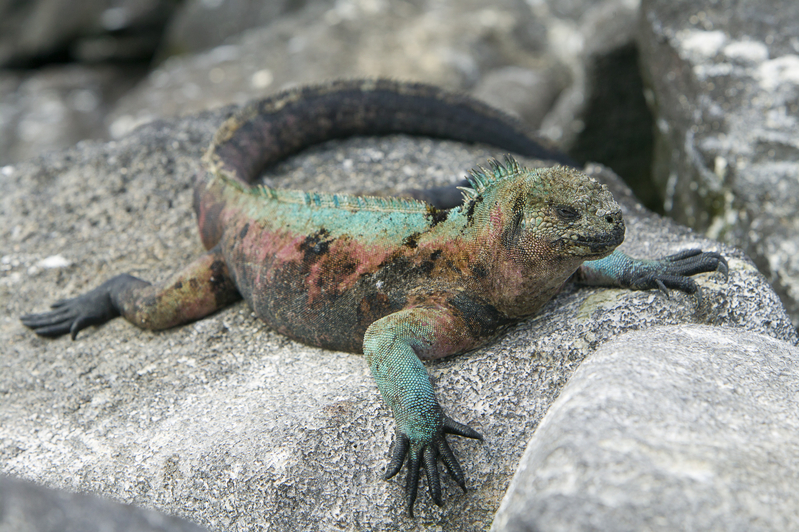 The Galapagos marine iguana is unique in many respects. As the world’s only sea-going lizard it has adaptions that allow it to dive up to 40 feet beneath the ocean’s surface in order to feed upon algae and eat seaweed. These adaptations include a short, blunt , a long, flat, incredibly strong tail that propels it through the water, and a special gland that allows it to expel excess salt from its body. But perhaps the marine iguana’s most remarkable adaptation is its ability to shorten its body length during lean times. Researchers have found that individuals can become up to 20 percent shorter within a two-year period in response to El Niño events, which cause food to become scarce. They have also found that the more shrinks, the greater its chance of survival, due to an increase in its foraging efficiency and a decrease in its energy expenditure. The iguana’s length increases again when food becomes more abundant. This ability is thought to be unique among all vertebrate species on earth.

4. A cormorant that “flies” underwater 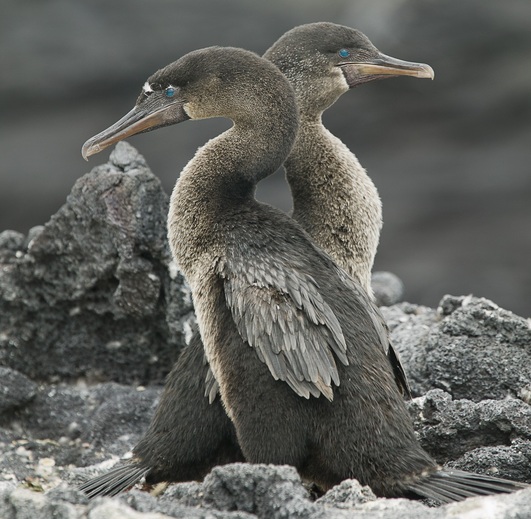 Flightless cormorants, (c) Patrick Endres
The flightless cormorant is the only species of cormorant that can’t fly. It is found only in the Galapagos and on only two islands: Fernandina and Isabela. With an estimated population of just 1,500 individuals, it is one of the rarest birds in the world and perhaps one of the most interesting from an evolutionary perspective. Over time, the wings of the flightless cormorant became very small relative to the wings of other species of cormorants–about one-third as big as they’d need to be in order for the bird to take flight. Their dense bodies, small wings, webbed feet and powerful legs allow them to plunge to the sea floor and hunt for fish, eels small octopi. Why did this happen? The prevailing theory is that because there were no large predators on the islands when flying cormorants arrived, the ability to fly became not just superfluous but a disadvantage. Flying, and the physiology that makes flying are metabolically expensive. Therefore, individuals that were better equipped to feed without having to fly (those with smaller wings, for example) were more likely to survive and pass along their traits to their offspring. At some point, a new species was born.

5. A snake that eats fish 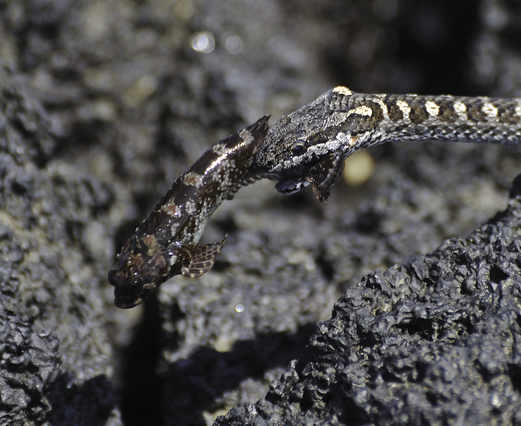 Biologist Godfrey Merlin has stumbled upon a surprising and previously unknown adaptation in a species of a small land snake that inhabits the shores of Fernandina Island: the ability to venture into the intertidal zone and catch small fish. Merlin, who first witnessed this behavior in 1995, convinced a BBC crew to visit earlier this year to film the snakes in action. During the six days they spent on the island, Merlin saw many individuals entering the chilly, shallow waters in search of four-eyed blennies. He noted that each snake sticks to its own “fishing patch,” though they will sometimes feed together.

Of the significance of his finding, Merlin says, “It is rare today to find wild places that are completely free of anthropogenic change. Fernandina is one of those places. What we observe is the process of adaptation taking place in a totally natural environment. It is the reaction of life forms that find themselves in a novel relationship in which unfilled niches are available. It is an example of reptiles’ capacity behavioral change, since survival may depend on it. These snakes are not as they were before. Perhaps change will continue in directions as of yet unknown. Surely we border on the transmutation of species.”

Want to see some of these astounding animal adaptations for yourself? Start planning a trip to the Galapagos!
Browse Our Galapagos Adventures
Repeater Layout : vertical-2up
Galapagos Hiking & Kayaking Adventure
New Itinerary!