Our excursions into Katmai National Park and Preserve vary widely from one month to the next due to differences in bear behavior and activity. Find out the best time to visit based on your individual interests, whether it be June, July, August or September. 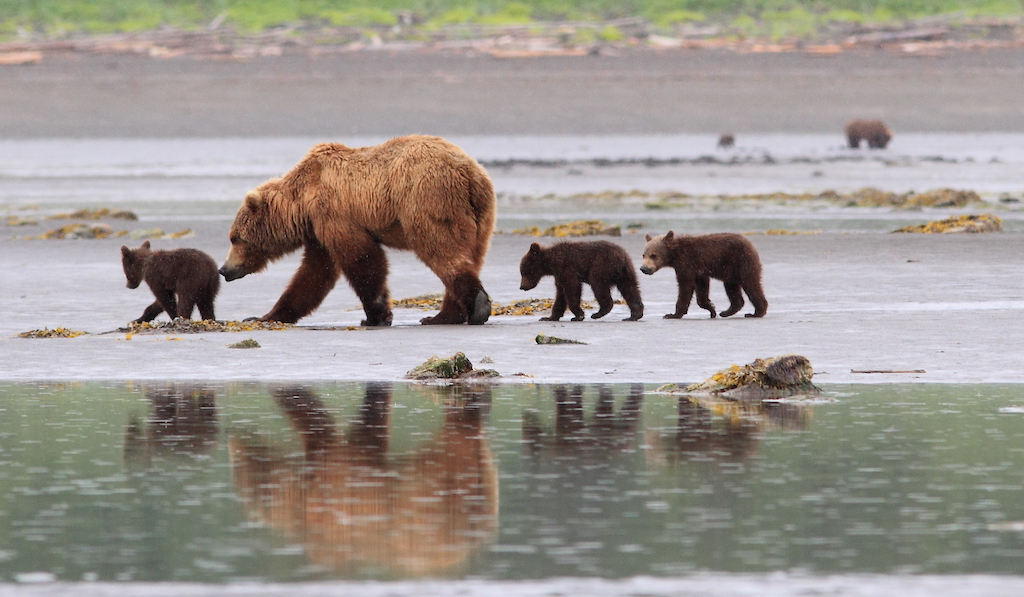 In June, brown bears converge on the coast of Katmai National Park to socialize, breed and forage. Eager to replenish their diet after months of hibernation, the grizzlies congregate on the tidal flats to dig for razor, butter and steamer clams and in the meadows to feed on protein-rich sedges and other vegetation. The best time to witness play behavior is in early when the bears are not yet focused on fishing for salmon. Mid-to-late June is also the peak of the mating season in Katmai. If you want to see mothers with new cubs, adolescents playfighting, and giant males sparring over sows, this is a wonderful time to go. 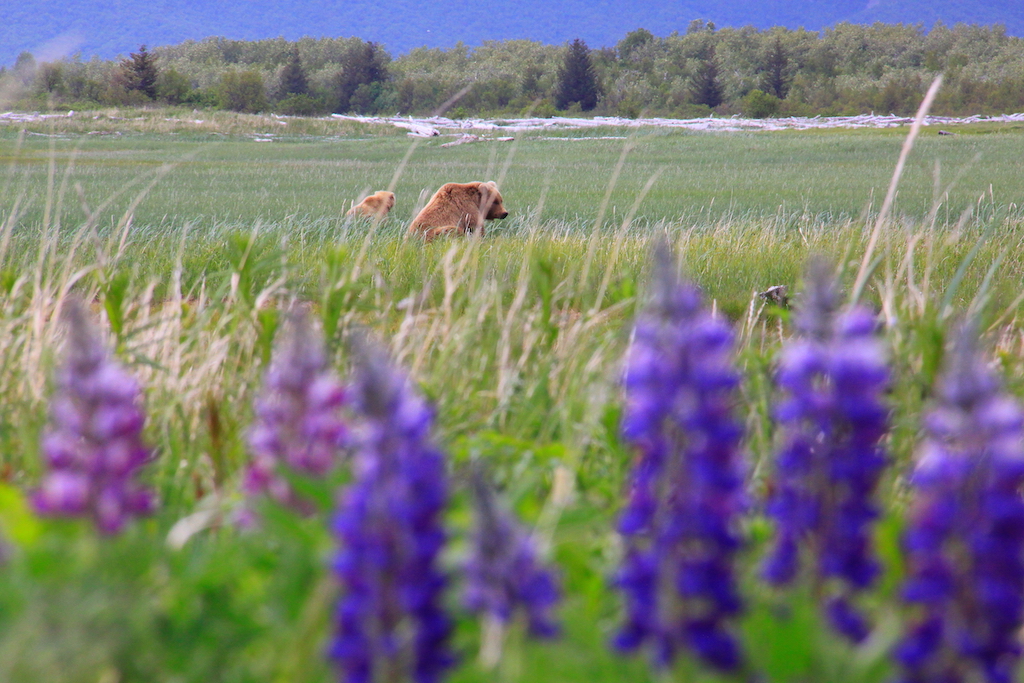 It takes a significant amount of nutrients to satiate a bear, so they continue to spend most of their time eating grasses and berries that are plentiful on Katmai. Physically, the bears maintain their traditional round, fuzzy look. Mothers nurse their cubs, and young bears nuzzle each other and frolic in the meadows. If you want to see bears interacting with each other on dry land, this is a great time to go. July is also the best time to see wildflowers, as the coast blooms with blue and purple lupines, fireweed and wild geranium, and bears gather to graze on the sweet stalks. 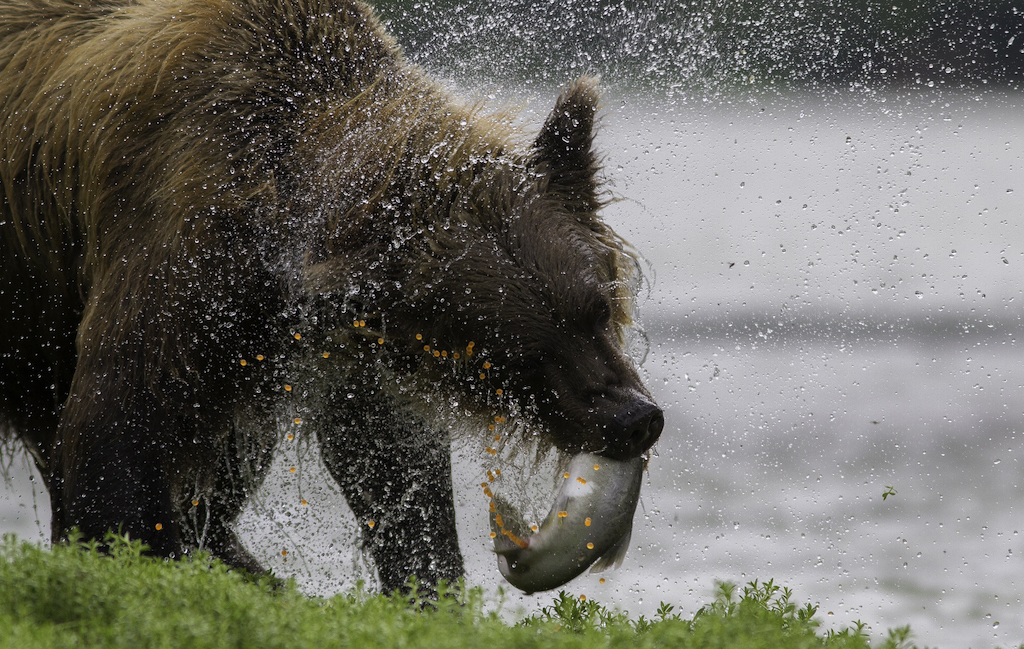 In August, salmon leap from the streams and rivers, and the bears are intent on catching as many as they can—sometimes up to 11 per day!  August is a perfect month to go if you want to see the bears fine-tuning their fishing skills. Watching the bears snatch fish from the rapids is enthralling, and photographers will delight in capturing the rush of water alongside the excitement and action of the bears. The are hungry for more substantive protein, and you may see territorial spats as they fight for fish. 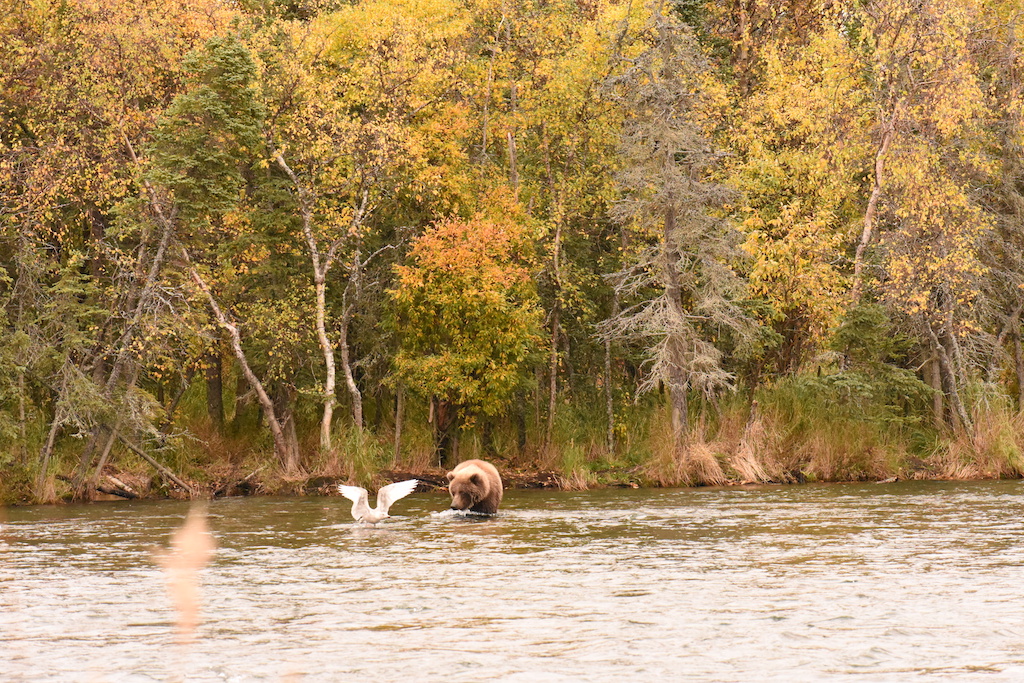 September comes in a golden glow—the birches, willows cottonwoods adorned with fall foliage. The bears continue to fish in the rivers, supplementing their diet with brilliant red berries that ripen in the fall. This is when the bears are at their largest and most mellow in demeanor, having gorged all summer on fatty salmon. Their coats are glossy and thick in anticipation for winter, and they have an impressive appearance. For those wanting to photograph fishing bears amid an autumnal backdrop, this is the ideal month.

Regardless of when you go, every month offers enchanting views of Katmai’s mountains and encounters with beautiful bears. You may also spot wolves, bald eagles, red foxes, moose and caribou during your trip, and the chance to see fascinating interactions between grizzlies and other wildlife grants onlookers a once-in-lifetime opportunity.

An exclusive small-ship adventure to view the world's largest coastal grizzlies up close! Walk the shores as enormous brown bears dig for clams, forage for grasses and pursue salmon in tidal pools.

Photograph Katmai's famous grizzlies once Brooks Lodge closes and visitors disappear—we fly by private floatplane to watch them fatten up on the salmon that remain!

Get Weekly Updates
Our weekly eNewsletter highlights new adventures, exclusive offers, webinars, nature news, travel ideas, photography tips and more.
Request Your 2022 Catalog
View Our 2022 Digital Catalog
Send Us a Message
Use the form below to send us a comment or question.
Refer a Friend
Earn rewards for referring your friends! We'd like to thank our loyal travelers for spreading the word. Share your friend's address so we can send a catalog, and if your friend takes a trip as a first-time Nat Hab traveler, you'll receive a $250 Nat Hab gift card you can use toward a future trip or the purchase of Nat Hab gear. To refer a friend, just complete the form below or call us at 800-543-8917. It's that easy! See rules and fine print here
/articles/alaska-and-northern/alaska-travel-stories/best-time-katmai/
Physical Requirements