As afternoon edged toward sunset in Botswana’s Moremi Game Reserve, our guide slowed the Land Rover to a halt as he studied the ground on the side of the sandy track.

“There’s a leopard around here,” he said, in a hushed voice. Our eyes immediately turned to the treetops. “No, down low. He’s right around here somewhere.”

He rolled the Land Rover forward at a crawl. We waited, silently, till suddenly my son pointed furiously, his face animated, barely able to contain his enthusiasm. “There it is! A leopard! It’s right there!" 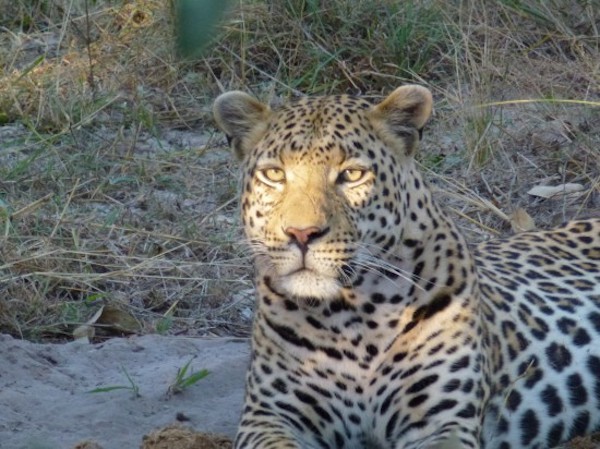 And indeed it was, lounging alongside the road not 8 feet away, the sun’s sinking rays illumining its regal face. The leopard remained still, as we captured amazing photographs.  it rose and sauntered toward a small mopane tree a few feet away, putting on quite a show for us as it rose onto its haunches and began scratching its front paws and upper body against the tree trunk, a means of marking its territory.

When the leopard finally moved on, its tawny coat and black spots merging seamlessly with the tall grass, we turned to Anton, our guide, and began peppering him with questions. “How did you know it was around??” was foremost. 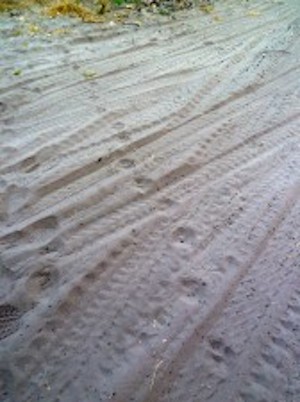 Leopard tracks across a road in the Moremi Game Reserve, Botswana. © Kjell Redal

Thus began our first lesson in tracking. Anton, who grew up in the Okavango Delta region and knows its landscape and wild residents intimately, explained that he had first seen the hoofprints of running impala on the edge of the sandy . Close behind were leopard tracks. Then, the impala tracks veered off as the game eluded capture, while the leopard’s prints reversed direction—the same point at which Anton had turned our Land Rover around and began searching. Our untrained eyes could see little but tire tracks in the sand, but as Anton showed us the movement and layering of the animal action, we too discovered the clues that helped him locate the leopard for us to observe.

Without an excellent guide’s local knowledge and expertise, we would likely have driven right by, missing this captivating encounter with an elusive predator.

The next day we were graced with another leopard sighting, equally due to Anton’s well-honed power of observation in the bush. He stopped the vehicle and pointed to the high branches of a large acacia tree about 50 yards away.

“Look -- there’s a leopard with an impala kill.” 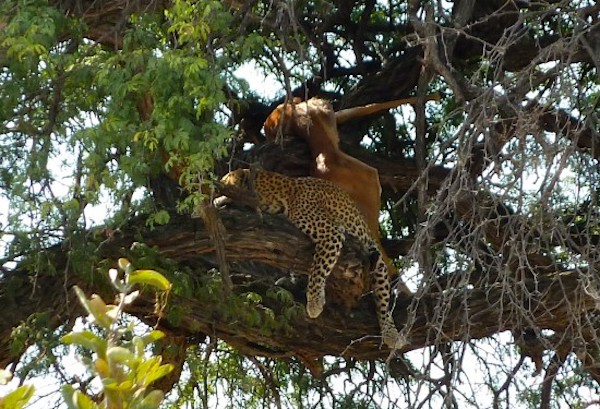 Sleeping leopard, after gorging on an impala carcass he hauled up this tree. © Wendy Redal

We looked hard, and one by one we started to see what Anton saw.

Again, our good fortune was due to Anton’s expert eye. He had seen a flash of color that stood out, high in the tree. It was the golden coat of the that the leopard had dragged a good 30 feet or so up to a safe spot where competing predators couldn’t seize the feast. The leopard itself was barely visible in the shadows where it lay sleeping over a thick branch, sated for a while until it would wake to dine again.

We looked closely with binoculars, awed by the strength of this gorgeous animal to haul his kill to such heights.

Throughout the rest of our we were impressed time and again with our guides’ remarkable ability to find game and to share knowledge and lore of the African bush. We watched them tear apart big chunks of elephant dung to reveal the termites that had taken up residence within, in the very beginning stages of building a mound. We marveled at how they could tell how old a pile of animal scat was, within hours, days or weeks. And we laughed at their stories of growing up in the Okavango’s watery when exploring by mokoro (dugout canoe) and hunting hippos were part of their everyday activities. When one of our guides was a boy, his parents used to warn him about the honey badger, a fierce predator notorious for taking down big male Cape buffalo by biting them in the privates. He learned to avoid this fierce carnivore by pondering the prospect of a similar fate, even though they didn’t attack little boys in a like manner.

If you’re planning a safari to Africa, you owe it to yourself to ensure that your trip has superlative leaders at the helm. In our case, the fact that our guides were not just locals but highly trained professionals licensed by the Botswana Department of Wildlife made a huge difference in the experiences we had every single day.

For most travelers, an African safari is an epic, once-in-a-lifetime adventure. Don’t cut corners when it comes to securing a great guide. When you book a safari with Nat Hab, you can rest assured that you’ll be in the expert hands of the most experienced naturalists in Africa. 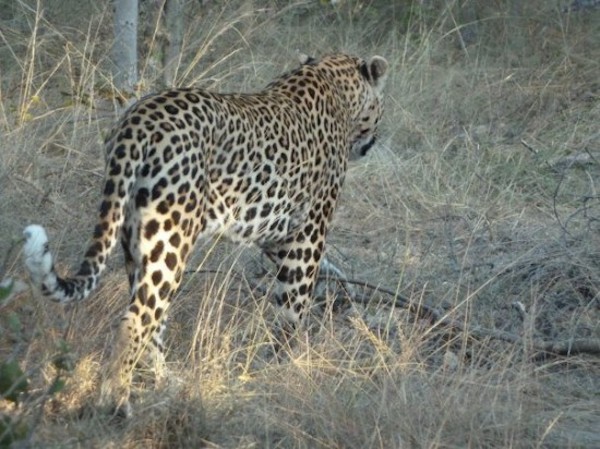