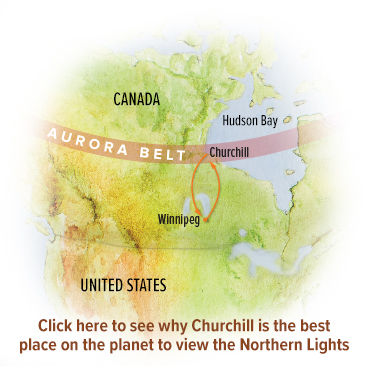 Day 1: Winnipeg, Manitoba
Our northern lights tour begins in Winnipeg. Once a fur-trading hub and later a Canadian Pacific Railway boomtown, today Manitoba's capital is a vibrant cultural and commercial center on the eastern edge of Canada’s vast prairies. On arrival, you are met and transferred to the distinguished Fort Garry Hotel, one of the city’s most prestigious landmarks. Built in 1913 by the Grand Trunk Pacific Railway in the style of a French chateau, it remains the grande dame of Winnipeg hospitality. This evening, enjoy a welcome dinner with your Expedition Leader and fellow adventurers.

Day 2: Winnipeg / Fly to Churchill—Town Tour & Northern Lights Watch
Board our chartered flight to Churchill this morning. On arrival, transfer to our hotel, followed by a brief tour of this historic settlement that grew up around the site of a major Hudson's Bay Company fur-trading post established in the early 18th century. As night falls, we head out for our first quest in search of the northern lights. The display often begins as a pale glow low in the northern sky, which slowly begins to shift and undulate, frequently emerging as shimmering curtains of green. Sometimes pink, red or even violet colors appear. For centuries, the phenomenon of the northern lights was a mystery, inspiring a host of mythical explanations. While we know now that the aurora is caused by the interaction of the solar wind with Earth’s magnetic field, more poetic stories of their origin linger, including the Hudson Bay Inuit’s belief that the lights are the mystical display of their ancestors’ souls dancing in the sky.

Days 3–5: Aurora Viewing by Night, Arctic Exploration by Day
On these dark, icy nights in the Canadian North, we travel outside town to where views of the aurora are best, away from artificial light. Yet we don't stand in the cold as we wait for the lights to appear: each evening includes a different vantage point to witness the phenomenon in warmth and comfort. Our custom-designed Aurora Pod® features 360-degree views of the night sky through a glass ceiling and half-walls. Gain another perspective from circular Aurora Domes with Plexiglass roofs: climb the ladder to the upper level for a view in the round, relax on the sofas below, or step outside for a totally clear vista. Our Expedition Leader is on hand with tips to help you capture coveted photos. On another night, view the lights from our isolated cabin deep in the boreal forest, which we access on an overland snowcoach expedition atop a frozen creek—a Nat Hab exclusive! Look for the glow above the spruce trees as we warm up around the wood stove, then head out to marvel at the full expanse of sky. We're the only souls around, since only Nat Hab travelers have this special opportunity.

While nights are devoted to the aurora, daytime excursions focus on distinctly northern adventures, local cultures, and the austere beauty of our subarctic environs. A highlight is a journey aboard our custom-built snowcoach deep into the North Woods. This new vehicle, designed exclusively for our use, allows passage over wild, roadless landscapes, offering a true wilderness experience outside Churchill. We'll also track hardy northern wildlife on a snowshoeing excursion through a tamarack forest, looking for signs of Arctic hare, Arctic and red fox, ptarmigan and more.

Back on the tundra, the historic town of Churchill offers encounters with intriguing local people and roving sled dogs. While the Hudson’s Bay Company established a fort near here in 1717 as part of its fur-trading network across the Canadian North, Indigenous cultures had already been flourishing in this challenging climate for thousands of years. Explore their heritage on a dog sled ride through the boreal forest, during a visit to the Itsanitaq Museum, and via cultural programs featuring the arts and traditions of the Inuit, Dene and Metis peoples. Tour the Churchill Northern Studies Center, a field station devoted to research and education on topics pertinent to the western Hudson Bay region. We also learn to make an inukshuk out of snow blocks—a human-shaped navigational landmark traditionally built of stones by Inuit people throughout the Arctic.

Day 6: Churchill / Winnipeg
The morning is free to wander Churchill’s main street, where several locally owned shops sell authentic local handicrafts, from traditional mukluks to sculptures made of caribou hair. We then transfer to the airport for our chartered flight back to Winnipeg. Gather for a farewell dinner this evening to celebrate all our Arctic adventures.

Day 7: Winnipeg / Depart
After breakfast,  transfer to the airport for flights home.

Please note: Scheduling for all activities in Churchill is flexible in order to accommodate varying weather conditions and other contingencies. Your itinerary may vary slightly and activities may happen at different times from what is listed here, but inclusions are the same.