Back to All Itineraries 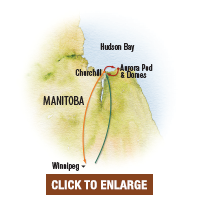 Day 1: Winnipeg, Manitoba
Arrive in Winnipeg and transfer to the Fort Garry Hotel. 1913 by the Grand Trunk Pacific Railway, the French chateau-style hotel remains the grande dame of Manitoba’s prairie capital, offering first-class hospitality. Historic Winnipeg, Canada’s fourth-largest city, is located at the confluence of the Red and Assiniboine rivers. The region was a trading center for aboriginal peoples long before the arrival of when French fur traders built Fort Rouge here in 1738. By the early 1800s, settlers from Scotland were farming the fertile Red River Valley, and the Red River Colony was later incorporated as the City of Winnipeg in 1873, ushering in a future as a railway and business hub. Today, Winnipeg is the cultural and commercial center of Canada’s prairie region. Enjoy a welcome dinner this evening with your Expedition Leader and fellow travelers.

Day 2: Assiniboine Park Zoo / Manitoba Museum
Our day in Winnipeg begins with the Canadian Signature Experience at the Assiniboine Park Zoo, an exclusive opportunity to discover the wildlife, and culture of Manitoba's North. We'll view a host of Arctic species on the 10-acre exhibit, from caribou and Arctic fox to wolves, seals, and polar bears swimming through underwater tunnels in the Sea Ice Passage. A member of the animal care team offers a behind-the-scenes look at the care of Arctic species including polar bears, and snowy owls. In the 360-degree domed Aurora Borealis Theater, get a preview of the northern lights dancing overhead along with an introduction to the people and animals of the Canadian Arctic. We'll also tour the laboratories of the Leatherdale International Polar Bear Conservation Center, getting a current take on polar bear research and the role of zoos around the world in impacting polar bear conservation.

This afternoon, continue to the acclaimed Manitoba Museum, with exhibits reflecting the natural and human heritage of the province. In addition to plenty of time to explore on your own, our program features “Inuit: People of the North,” a seminar designed to provide an understanding of the history and traditional lifestyles of these indigenous Arctic dwellers.

Day 3: Winnipeg / VIA Rail Train
After a morning spent discovering more of Manitoba’s thriving capital, we board our northbound VIA Rail train around noon. Enjoy a relaxing afternoon as we watch the wide-open prairie landscape roll by. As darkness falls, be sure to keep an eye out for possible sightings of the northern lights. You may even see them from inside your own private sleeper cabin, outside the large picture window. Dinner is served aboard the train.

Day 4: Train to Thompson / Fly to Churchill
The train rolls northward this morning, and we enjoy a relaxing ride with views on the changing ecosystems, as rolling grasslands give way to dense boreal forest dotted with countless lakes. Around midday, arrive in the subarctic town of Thompson, Manitoba, where we transfer to the airport for our flight to Churchill. arrival, we take a tour of this historic frontier outpost town before checking in to our hotel. We have dinner at a local restaurant before our first chance to see the northern lights on the tundra this evening.

Days 5–6: Churchill—History, Culture, Nature & Aurora Viewing
The Hudson’s Bay Company established a fort here in 1717 as part of its fur-trading network across the Canadian North, but indigenous cultures were already flourishing against the harsh Arctic climate for thousands of years. During the days, we explore Churchill's heritage and traditions with an array of local activities: Meet a local dog musher and take a dog sled ride through the boreal forest, visit the Itsanitaq Museum, and enjoy cultural programs featuring the arts and traditions of the Inuit, Dene and Metis peoples. On the tundra outside town, our Expedition Leader introduces us to northern ecology and the stark yet alluring winter landscape.

As night falls, we await nature’s magic: the spectacle of the aurora borealis—the legendary northern lights. Each evening holds an opportunity to witness the phenomenon in warmth and comfort. Our custom-designed Aurora Pod® features 360-degree views of the night sky through its glass walls and roof. Another view on the lights takes place in Plexiglass Aurora Domes positioned outside town in complete darkness. Relax on the sofas below, or climb the ladder to the upper level for an unimpeded circular view of the heavens.

Often, the aurora begins as a white glow low in the sky that slowly starts to shift and undulate. Wavy patterns evolve, colors may appear and change, until the lights become shimmering curtains of green. Sometimes we even see yellow, red or purple tones. For centuries, the phenomenon of the northern lights was a mystery, inspiring a host of mythical explanations. While we now know the aurora is caused by the interaction of the solar wind with Earth’s magnetic field, more poetic stories of their origins linger, including the Hudson Bay Inuit’s belief that the lights are the ethereal display of their ancestors' souls dancing in the sky. Of course, since the lights are a natural phenomenon, we are never guaranteed to see them, but Churchill has some of the most frequent and intense auroral activity on the planet—meaning our odds are very good!

Day 7: Churchill / Winnipeg
This morning, there’s some free time to wander Churchill’s main street, where several locally owned shops offer authentic local handicrafts from traditional mukluks to caribou-hair sculptures. After some final activities and lunch in town, we transfer to the airport for our flight back to Winnipeg. This evening, gather for a farewell dinner.

Day 8: Winnipeg / Depart
After breakfast, our northern lights tour comes to a close with a transfer to the airport for flights home.

Please note: Scheduling for all activities in Churchill is flexible in order to accommodate varying weather conditions.