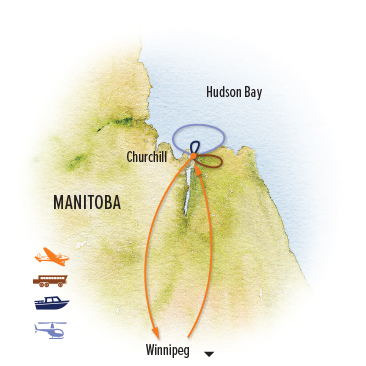 Day 1: Winnipeg, Manitoba
Arrive in Winnipeg and transfer to the Fort Garry Hotel, built in 1913 by the Grand Trunk Pacific Railway. The French-style chateau is still the grande dame of Winnipeg, offering first-class hospitality in Manitoba's capital. Once a a fur-trading post and trade hub where the Assiniboine and Red Rivers meet, today Winnipeg is a thriving cultural and commercial center on the eastern Canadian prairie. Gather with your Expedition Leader for a welcome dinner on this first evening of your northern summer adventure.

Day 2: Winnipeg / Churchill
This morning, fly north by private chartered plane to Churchill, a remote community inaccessible by road and the gateway to Manitoba's Arctic. We spend the day exploring this frontier town near the site of an important 18th-century Hudson's Bay Company fur trading post. During our tour, we visit Churchill's Itsanitaq Museum, showcasing the region's Indigenous cultures with artifacts collected from centuries of habitation. We will also meet local individuals to gain insight into their cultural traditions and daily lives. These captivating storytellers share tales from their personal histories, offering a window into the enduring cultures that have flourished in this daunting environment for thousands of years. Our Expedition Leader offers an introduction to the natural history of the region as we explore the boreal forest, one of three ecosystems that merge where Churchill is located. This juncture is called an ecotone—the nexus of different ecologically and geographically defined areas; in this case, the boreal forest, or taiga, to the south, Arctic tundra to the northwest, and the marine environs of Hudson Bay to the north. In such a dynamic environment, summer wildlife flourishes, and we go in search of it over the next several days.

Days 3–5: Beluga Encounters, Wildlife Watching & Churchill History
With Churchill as our base, we spend four days exploring the tundra, river and sea coast of Hudson Bay. On a helicopter ride over the subarctic plain, search for polar bears that roam the vast tundra, and gain an aerial view of beluga pods that gather where the river meets the sea. More than 3,000 of these small white whales congregate in the mouth of the Churchill River each July and August, and we make several outings to observe them. View belugas up close on two separate Zodiac excursions, then meet them at eye level as we kayak among these gentle, inquisitive cetaceans that often nudge close to our paddles or follow in our human-powered wakes. With their unusual ability to turn their heads from side to side, belugas seem to be as curious about us as we are about them. Through the use of a hydrophone, we can also listen to their otherworldly songs.

We take a boat trip to explore the brackish water habitat where other wildlife thrives along Churchill River estuary, then cross the river to reach Prince of Wales Fort, which we step ashore to explore on foot. The remote, windswept ruins of this Hudson’s Bay Company fur trading post built in 1717 occupy an area first scouted by Danish explorer Jens Munk in 1619 on his quest for the Northwest Passage. The fort became an important commercial hub and a key locale in the opening of the Canadian West as British and French forces vied for territorial control. On occasion, we see polar bears roaming just north of this area around the rocky promontory that juts into Hudson Bay. On the opposite bank of the river, the settlement of Churchill grew up when the rail line was built to Hudson Bay in 1929, opening up transport for grain from a new port facility.

Aboard a specialized Polar Rover vehicle, traverse the tundra on an Arctic safari in search of northern wildlife as we head to a spot near Hudson Bay for an outdoor cookout. Amid a riot of wildflowers, which carpets the green tundra with color, keep an eye out for Arctic fox, ptarmigan, caribou and polar bears. At this time of year, it is not uncommon to find mothers with cubs. At the interface of the boreal forest and tundra, we investigate this nexus of ecosystems that's home to a variety of flora and fauna, exploring on short walks with our Expedition Leader. On later-season departures, when the sun sets earlier and dark night skies return, there's a possibility we could see the northern lights if conditions are just right. Churchill lies directly beneath the auroral oval, one of the best places on Earth to view the aurora borealis when it is visible.

Day 6: Sled Dog Experience / Churchill Northern Studies Center / Winnipeg
Our chartered flight back to Winnipeg leaves this afternoon, allowing plenty of time to do more in Churchill today. Meet a local musher and his lively team of sled dogs we learn about this historic mode of northern transportation, and ride in a wheeled cart pulled by the avid huskies. Tour the Churchill Northern Studies Center, where scientists are researching the Arctic environment, social issues and sustainable resource development within this harsh yet fragile landscape. Pick up some last-minute gifts or souvenirs on the town's main street, where several shops sell locally made handicrafts from Inuit-designed wall-hangings to caribou fur sculptures. All too soon, it's time to head to the airport for our chartered flight back to Winnipeg. Transfer to the Fort Garry Hotel, where we gather for a festive farewell dinner this evening.

Day 7: Winnipeg / Depart
After breakfast, our Arctic summer tour comes to a close with a transfer to the airport to meet homeward flights.

Please note: Specific itinerary timing may vary and activities may happen in a different order from what is listed, but inclusions are the same.