Fill out the form below to receive additional information about our Wild Ethiopia: The Roof of Africa or give us a call at 800-543-8917.

Wild Ethiopia: The Roof of Africa 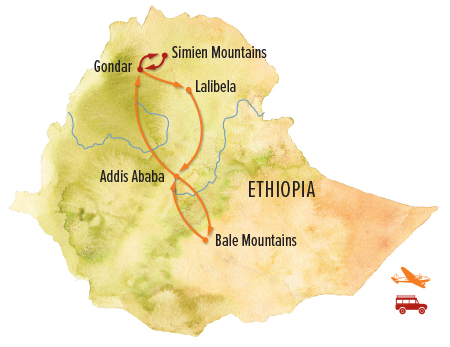 Day 1: Addis Ababa, Ethiopia
You are met on arrival at Bole International Airport and transferred to our hotel in the heart of Ethiopia’s capital. Located in the center of the country, Addis Ababa is Ethiopia’s geographic, political and cultural hub. Addis is distinct from many other African capitals because it was not founded or developed under colonial rule. One of its best-known sites is the National Museum of Ethiopia, which houses the remains of “Lucy,” a bipedal hominid who lived 3.2 million years ago and was discovered in 1974. Since Addis is located at 7,700 feet above sea level, our overnight stay here provides an important chance to acclimatize before we ascend substantially higher over the next few days. We gather for a welcome dinner with our fellow travelers this evening.

Day 2: Gondar / Simien Mountains National Park
Transfer to the airport very early this morning for our flight to Gondar. As we drive on to Simien Mountains National Park, the road winds through highland pastures and fields of grain, eventually reaching the top of a vast plateau. This wild high country as the “Roof of Africa” holds some of the continent’s most dramatic scenery. The Simien Mountains, among the highest ranges in Africa, include Ras Dashen, Ethiopia’s tallest peak at 15,157 feet. Precipitous cliffs, Afro-alpine steppe, tree-studded grasslands and deep canyons define this varied terrain that stuns our senses at every turn.

This afternoon we take a walk to see geladas, a gregarious species of Old World monkey found only in the Ethiopian Highlands. Geladas are the only primates that are exclusively grazers, living on the grasses of the central plateau. Large and robust, males weigh up to 60 pounds, with a heavy cape of dark hair down their back. Little known and little studied, geladas live in huge troops of several hundred individuals. They are highly social, often rambunctious, and comfortable allowing us to approach at close range. At night, they sleep on cliff ledges out of range of nocturnal predators like hyena, leopard jackal. Drink in the vast scale of the highland landscape, with magnificent views for miles, and keep an eye out for possible sightings of  ibex, klipspringer, jackal fox.

Days 3 & 4: Exploring the Simien Mountains
Exhilarating days are in store as we discover more of this high-altitude region and its local wildlife. Driving along the escarpment edge, we pass Korbete Metia, a solid rock wall that opens up to reveal panoramas of the distant lowlands. This is a good place for spotting lammergeyers—giant birds of prey with a 10-foot wingspan that nest on the cliffs and spend their days soaring on thermals with other raptors. Look also for the tawny eagle and Ethiopian thick-billed raven. We stop for a vista of Jinbar Falls, one of Africa's highest waterfalls at more than 1,600 feet. The narrow ribbon of water slices through a vertical green-walled canyon, creating a dramatic photo opportunity.

Reaching Chennek at 11,800 feet, walk among giant lobelia trees with their spiky fronds, in a landscape that feels otherworldly. This is the best place to spot the ibex, a national symbol of Ethiopia and one of the world’s most endangered mammals, found only in this isolated region. Habitat loss and pressure on the environment from cultivation have driven their numbers down to just a few hundred individuals, which live on the escarpment's steep slopes and grassy ledges. The region is also home to geladas and another of Ethiopia’s threatened endemics: the very rare Ethiopian wolf, also called Simien fox—Africa's most endangered predator. Fewer than 400 remain, living in the alpine zone of the plateau. Keep an eye out, too, for klipspringer and bushbuck.

Depart very early this morning for the drive back to Gondar. This city in northern Ethiopia is famed for its 17th-century stone castles and fortresses that evoke the feel of an African Camelot. Founded in 1636 by the great Emperor Fassilidas, this UNESCO World Heritage Site that was once the royal capital of Ethiopia enjoys a striking setting atop tree-studded hills. We visit various castles and churches built by and his descendants, including the emperor’s own palace. The most impressive is Debre Birhan Selassie church, whose walls and ceilings are intricately decorated with scenes of biblical lore and medieval history. A swarm of bees is credited for preserving it from the destruction that befell most of Gondar’s churches by marauding Sudanese Dervishes in the 1880s. When their troops appeared outside the church gates, local lore holds that a huge phalanx of bees flew out of the compound and drove them away, a stroke of luck attributed to divine providence. Inside the stone walls and arched doors, is filled with biblical scenes, including some 100 faces of whimsical winged cherubs that stare down at us, representing the omnipresent gaze of God.

Lunch today at the Four Sisters is a highlight, featuring family recipes going back generations. Serving both Ethiopian and Western food, the famous restaurant also features cultural programs, including dance and culinary demonstrations.

Day 6: Lalibela
Today we fly to Lalibela, Ethiopia’s cultural crown jewel. A cradle of Ethiopian Christianity, Lalibela is renowned for its magnificent ancient churches and is the scene of many major religious ceremonies. Christianity in Ethiopia dates to the 1st century A.D., the only pre-colonial Christian presence in sub-Saharan Africa and one of the oldest Christian communities in the world. Today, about 60 percent of Ethiopia’s people are Christian, with most part of the Orthodox tradition.

Often called the eighth wonder of the world, Lalibela’s mystical rock-hewn churches evoke a profound sense of awe and admiration. Churches below ground level are carved straight from the rock, ringed by trenches and subterranean courtyards and connected by a maze of stone tunnels and passages. Of these, Bete Giyorgis is most famous and most photographed, as it is unobscured by any shelters erected over the site. The churches above ground are equally wondrous feats of engineering, built out of a single hunk of rock using no blocks, bricks, joints, seams or mortar. While individual churches are often built in the shape of a cross, multiple churches together also form a larger cross. We'll spend several hours walking among the churches this afternoon, with Bete Amanuel a highlight. This 36-foot-high monolith is considered by architectural historians to exhibit the finest and most precise workmanship in Lalibela, possibly because it was the private church of the royal family. Bete Medhane is the largest of Lalibela's churches and the largest human-carved monolith in the world, while the best preserved is Bete Markorios, a cave church originally used for secular purposes and thought to be approximately 1,400 years old.

Day 7: Lalibela—Asheton Maryam Monastery
After a leisurely breakfast, we make an excursion to a little-visited 13th-century rock-hewn monastery near Lalibela, at an altitude of more than 13,000 feet. Carved out of a cleft in a vertical cliff face on the side of Abuna Yoseph Mountain, the monastery’s setting is spectacular, as is the view from the trail on the way up. Though the hike to reach the site is short, the route is steep, and we take our time in the thin air. After our visit, we’re treated to a coffee ceremony in a local home, where the lady of the house hand-roasts the green beans over a fire, then grinds and brews them into a steaming cup for us to enjoy. Coffee has long been a hallmark of Ethiopian culture, and the coffee plant originated in Ethiopia. Ethiopia today is Africa's top coffee consumer and producer, and coffee exports currently constitute about 10 percent of GDP and 60 percent of Ethiopia's foreign income.

Day 8: Bale Mountains National Park
We fly back to Addis this morning, then continue by chartered plane to Bale Mountains National Park. Ethiopia’s second-highest mountain range contains one of the richest habitats in the country's alpine heights. It is the best place for viewing a broad cross-section of Ethiopia's unique wildlife, including Ethiopian wolf, rare mountain nyala, giant forest hog, cape hyrax, colobus and vervet monkeys. The park is home to more than 282 bird species, plus another 170 migratory birds pass through. Keep an eye out for nine of Ethiopia's 16 endemic species that reside here, including blue-winged goose, spot-breasted lapwing, yellow-fronted parrot, Abyssinian longclaw, Abyssinian catbird, Bale parisoma, Ethiopian siskin, fawn-breasted waxbill and the Abyssinian owl. Bale was one of the last regions of Africa to attract serious scientific exploration, and it remains sufficiently out of the way even today that few travelers make it here in comparison with the Simien Mountains. The park’s main attractions are its wild alpine scenery, particularly on the Sanetti Plateau that rises more than 13,000 feet above sea level. Keep an eye out for our first glimpse of Ethiopian wolf en route to the lodge, as they are often seen from the road.

Days 9 & 10: Bale Mountains—Sanetti Plateau & Harenna Forest
Spend two days exploring the wild wonders of the Sanetti Plateau and Harenna Forest. This vast highland region is the world’s largest expanse of Afro-alpine moorland, a montane habitat with an average elevation above 13,000 feet. The plateau is renowned for supporting the largest remaining population of Ethiopian wolf, which we hope to spot on wildlife drives in 4x4 vehicles. A walk atop the plateau reveals exhilarating views all the way to the Harenna Forest, one of the most extensive natural forests remaining in Ethiopia. At the southern end of the plateau, the Harenna escarpment affords an astounding view over the forest well over a mile below us—deeper than the Grand Canyon. This forest, far denser and more varied than the juniper woodland around Dinsho, has a similar appearance and composition to the forests found in other East African mountain landscapes. Though we're unlikely to see them, lions live in this densely wooded region.

Day 11: Addis / Depart
Via a scenic three-hour drive, we reach the regional airport for our flight back to Addis. On arrival in Addis, enjoy a farewell lunch together before checking in rooms at our hotel, offering a chance to refresh and relax before evening transfers to the airport.

Interested in extending your trip? Link it up with another adventure!
Repeater Layout : vertical-2up
Extra Day in Addis Ababa

From silk weaving to the National Museum containing the fossilized human ancestor "Lucy," Ethiopia's cultural and historic highlights are on display in this journey through its vibrant capital.
2 Days / Mar, Oct–Dec / From $595
Rwanda Mountain Gorilla Extension

Take a 5-day safari extension to track endangered mountain gorillas in the rain forests of Uganda. A once-in-a-lifetime experience!
5 Days / Year-Round / From $2895 (+air/permits)


Click here to see your trip details PDF. You should also receive it by email momentarily.
Ask a Question
Fill out the form below to receive additional information about our Wild Ethiopia: The Roof of Africa or give us a call at 800-543-8917.
Download Trip Details
Receive our handy trip PDF by email and have everything you need at your fingertips, including highlights of the trip, itinerary, accommodations, and full details on dates, prices and logistics.


Click here to see your trip details PDF. You should also receive it by email momentarily.
/africa/wild-ethiopia-tour/itinerary/
Physical Requirements