Fill out the form below to receive additional information about our Into Africa: Secluded Kenya or give us a call at 800-543-8917. 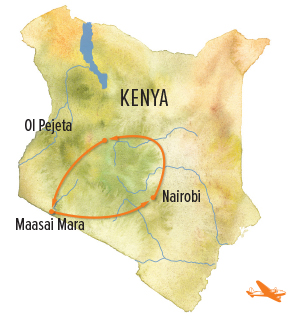 Day 1: Nairobi, Kenya / Nairobi National Park
Arrive in Nairobi and transfer to our boutique hotel on the outskirts of the city. Once a rough outpost amidst a highland swamp when it was the colonial capital of British East Africa in 1907, Nairobi has long been a meeting point for adventurers and travelers from all over the world, and most Kenya safaris still originate here. We leave the urban hub quickly behind en route to The Emakoko, an elegant lodge artfully built along the Mbagathi River bordering Nairobi National Park—a mere 20 minutes from the airport but a world away. True to its founders’ vision, The Emakoko gives travelers the chance to immediately commence their safari amid the wildlife they have come so far to enjoy.

Days 2–5: Ol Pejeta Conservancy, Laikipia—Nat Hab Private Mobile Camp
Fly north to Kenya’s dramatic Laikipia region in the Northern Frontier District, a wild and sparsely populated area that has become a center for global conservation leadership. Much of the Laikipia Plateau is comprised of privately owned ranches that have been combined by local communities to create vast conservancies where wildlife ranges freely. Renowned among Laikipia’s sanctuaries is Ol Pejeta Conservancy, which has played a critical role in sustaining endangered species including rhinoceros, Grevy’s zebra and sitatunga. Originally a working cattle ranch in colonial Kenya, today Ol Pejeta is the largest black rhino sanctuary in East Africa, and home to two of the world’s last remaining northern white rhinos. It has some of the highest predator densities in Kenya while still managing a successful livestock program. Guests can expect to see lion, leopard, elephant, buffalo and abundant plains game. We may also spot rarely seen species such as wild dog, Jackson’s hartebeest, oryx and reticulated giraffe.

Nat Hab’s Private Mobile Camp is the ideal base from which to explore this diverse wildlife haven that contains many of Kenya’s endemic northern species. We’ll hope to see the legendary Big Five and much more on day and night safari drives and guided nature walks set against the backdrop of snowcapped Mount Kenya. And at the end of each exhilarating foray into the bush, we return to the comforts of our private tented camp under the stars, redolent with the ambience of East Africa’s classic safari era.

Days 6–9: Maasai Mara National Reserve—Nat Hab Private Mobile Camp
Today we fly on to the world-famous Maasai Mara. One of Africa’s most acclaimed wildlife reserves, the Mara is renowned for its wildebeest migration, large lion prides and huge herds of plains game. This is the northern portion of the Serengeti, and we find excellent wildlife viewing all year long in these endless grasslands. The reserve is named for the Maasai tribespeople, the traditional inhabitants of the area who graze cattle here, and the Mara River that runs through it. The Mara at any time of year is an incredible safari opportunity, and to experience it during the green season when crowds are few takes it to a whole different level. In addition, more variable weather means dramatic skies, optimal for photography, and lush grass on the plains to draw great numbers of animals.

Natural Habitat’s private mobile camp enhances our quiet-season adventure further, offering a remote experience that evokes the solitude and sense of adventure of a century ago. As we set out on wildlife drives, it’s quickly evident why the Maasai Mara is renowned as one of the planet’s most impressive wildlife destinations. A multitude of species flourishes before us: herds of antelope dot the range, zebra and giraffe rove the savanna, elephants browse in acacia woodlands that shelter prolific birdlife, and stealthy predators like lion, leopard and hyena prowl in search of sustenance.  Our activities make the most of our unrivaled access to this wide-open wild country. You’ll find no more authentic safari adventure!

Day 10: Nairobi / Depart
Our safari comes to a close today as we fly back to Nairobi. Following a farewell lunch, enjoy the use of a day room this afternoon until your transfer to the international airport to meet departing flights.

Interested in extending your trip? Link it up with another adventure!
Repeater Layout : vertical-2up
Rwanda Mountain Gorilla Extension


Click here to see your trip details PDF. You should also receive it by email momentarily.
Ask a Question
Fill out the form below to receive additional information about our Into Africa: Secluded Kenya or give us a call at 800-543-8917.
Download Trip Details
Receive our handy trip PDF by email and have everything you need at your fingertips, including highlights of the trip, itinerary, accommodations, and full details on dates, prices and logistics.


Click here to see your trip details PDF. You should also receive it by email momentarily.
/africa/secluded-kenya-safari/itinerary/
Physical Requirements