Fill out the form below to receive additional information about our East Africa's Migration: A Photo Pro Expedition or give us a call at 800-543-8917. 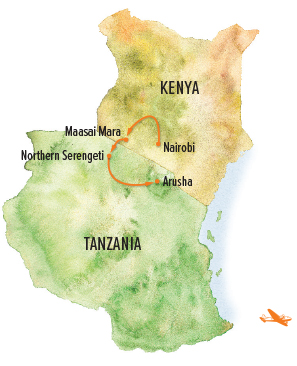 Day 1: Nairobi, Kenya
Arrive in Nairobi, where our photography expedition begins. Once a rough outpost amidst a highland swamp when it was the colonial capital of British East Africa in 1907, Nairobi has long been a meeting point for adventurers and travelers from all over the world, and most Kenya safaris still originate here. We leave the urban bustle behind en route to The Emakoko, our boutique hotel on the outskirts of the city. This elegant lodge is artfully built along the Mbagathi River bordering Nairobi National Park—just 20 minutes from the airport but a world away. Wildlife is often on view from the lodge, offering a tantalizing preview of what’s to come. This evening, gather for a welcome dinner with our Expedition Leader, who provides an orientation to all the photography adventures that lie ahead.

Days 2–6: Maasai Mara National Reserve—Nat Hab’s Private Migration Base Camp
On Day 2, transfer to the airport for our short flight to Kenya’s Maasai Mara National Reserve. Named for the Mara River that flows through the region and the Maasai tribal people who have been at home here for centuries, this is one of Africa’s most legendary wildlife enclaves. From the airstrip, board 4x4 safari vehicles to continue to Nat Hab’s private Migration Base Camp deep in the bush. Set in an isolated spot along the migration corridor far from other visitors, our camp offers a respite of rustic luxury for the next five nights.

Annually, some 2 million wildebeest, zebra and gazelle follow an ancient circuit covering 1,800 miles from Kenya’s Maasai Mara to the southern Serengeti and back again, trailed by an accompanying cast of predators. We rise early each morning to pursue the herds, eager for the multitude of photography opportunities that await.  We’ll see columns of game on the move as far as the eye can see, trundling along, sometimes galloping in a cloud of dust churned up by thundering hooves. Our exclusive campsite is located near the Mara River where wildebeest cross during the migration, and we expect to capture dramatic images of the animals scrambling through the water and up the opposite bank, attempting to elude crocodiles lying in wait.

A multitude of other species flourishes in the Mara to round out your safari portfolio: gazelle, impala, hartebeest, topi and other antelope dot the savanna, and stands of acacia woodland shelter prolific birdlife. Rich volcanic soils nurture the grassy landscape that sustains impressive herds of elephant and giraffe, and more lions per square mile are found here than anywhere else in Kenya. Hyenas also patrol the plains in some of the largest numbers in Africa.

Please note: Optional hot air balloon safaris with a champagne breakfast upon landing are also available for an additional cost during our stay at Nat Hab's Migration Base Camp.

Days 7–11: Serengeti National Park—Nat Hab’s Private Migration Base Camp
After our first breathtaking week in Kenya, it’s time to move on to neighboring Tanzania with a short flight to the northern Serengeti. This legendary savanna derives its name from a Maasai word meaning “endless plains," and golden grasslands stretch to the horizon under a blue bowl of sky. Serengeti National Park lies at the heart of this vast ecosystem, encompassing more than 3.7 million acres. Our deluxe tented camp rests within one of the park’s main migration corridors, where tens of thousands of wildebeest and zebra are milling about on the Tanzania/Kenya border this time of year. From our private 4x4 vehicles, we have the utmost in time and flexibility to photograph this remarkable spectacle, as the enormous herds traverse the plains while big cats and hyenas steal behind. The circle of life is on vivid display, and we may behold stunning scenes of predator-prey interaction as a lion takes down a sick animal or a cheetah snatches an infant.

Each evening, we retreat to the comforts of our camp, starting with sundowners to usher in the day’s finale, followed by elegant candlelight dinners served on white linen. The days of heavy canvas hunting camps set for the likes of Roosevelt and Hemingway were nearly over until photo safaris started to gain popularity in the 1970s, and our secluded camp is redolent with that vintage atmosphere. In the evenings, there’s  time to review and edit photos, sharing tips and techniques among fellow photographers and our Expedition Leader. The crackling campfires beckons, too, inviting you to pull up a chair under the spray of stars glittering in the black night sky. Eventually, it's time to turn in and get ready to do it all again. As you drift off to sleep, listen for lions roaring in the distance, with only canvas lying between you and the primal African bush beyond.

Day 12: Arusha, Tanzania / Depart
Too soon, our photography expedition comes to a close as we depart on a morning flight to Arusha. This lively city is Tanzania’s safari capital, where most Serengeti adventures begin or end. From the airport, we transfer to a peaceful country lodge at the base of Mount Meru, where a farewell lunch and day rooms await. Relax amid the ambience of the 1905 colonial farmhouse and lush gardens, surrounded by mature native forest where colobus and Sykes' monkeys play in the trees. If time permits, take a swim in the pool or enjoy a restorative massage in the open-air tent, serenaded by birdsong. Individual transfers are provided to Kilimanjaro Airport to meet departing flights this evening.

Interested in extending your trip? Link it up with another adventure!
Repeater Layout : vertical
Ol Donyo Lodge Extension
Traditional


Click here to see your trip details PDF. You should also receive it by email momentarily.
Ask a Question
Fill out the form below to receive additional information about our East Africa's Migration: A Photo Pro Expedition or give us a call at 800-543-8917.
Download Trip Details
Receive our handy trip PDF by email and have everything you need at your fingertips, including highlights of the trip, itinerary, accommodations, and full details on dates, prices and logistics.


Click here to see your trip details PDF. You should also receive it by email momentarily.
/africa/kenya-tanzania-migration-photo-safari/itinerary/
Physical Requirements