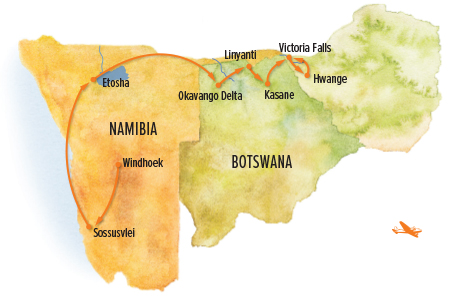 Day 1: Windhoek, Namibia
Our Southern Africa photography expedition begins in Namibia’s capital of Windhoek, where you are met on arrival at the airport. Transfer to our upscale guesthouse in a tranquil neighborhood near the city center, and enjoy time to relax or explore the city sights. Windhoek is a modern, walkable city with an eclectic urban skyline featuring both contemporary and colonial architecture, from German castles and cathedral spires to glass skyscrapers. This evening, gather for welcome dinner with our Expedition Leader and an orientation to the extraordinary photography adventures that lie ahead.

Day 2: Private Kulala Wilderness Reserve
Namibia’s landscapes are entrancing, and we fly from Windhoek to the private 90,000-acre Kulala Wilderness Reserve to photograph the country’s most iconic vistas. Our destination is Little Kulala Camp, tucked into the heart of Namibia’s vast sand sea. Here, the massive dunes of Sossusvlei tower a thousand feet above the desert floor, burnished gold against the cobalt blue sky. Sossusvlei means “dead-end marsh”—the place where the dunes rise to prevent the Tsauchab River from flowing to the Atlantic Ocean. Within Sossusvlei, Namibia’s largest conservation area, look for ancient petrified dunes that formed as long as a billion years ago. There is a sense of endless space in the untouched desert wilderness as we discover its silent magic on short walks and wildlife drives over the next few days.

Days 3 & 4: Sossusvlei Dunes / Hot Air Balloon Ride
In Sossusvlei, we have unhurried time to photograph this otherworldly landscape. The word namib in the Nama language means “vast,” and it is an apt name for this ancient arid expanse that is the world’s oldest desert. We set out early to photograph the shape-shifting dunes at sunrise, framed by intense blue skies. At dawn, they glow deep carnelian, changing by the minute as the sun climbs into the sky, turning rose, rust and ochre. Hidden inside are diamonds, tucked into the sand mountains by currents, waves and wind.  In 4x4 vehicles, we are immersed in the great sand sea, the stark appearance of which belies a surprising array of resident wildlife, including oryx, ostrich, springbok, gemsbok, spotted and brown hyena, aardwolf and bat-eared fox. The rare dune lark’s entire habitat is confined to this area. One morning, we'll take a hot air balloon excursion at sunrise for stunning aerial shots of the play of light on the dunes. Sunset photography sessions also await, followed by an opportunity for astrophotography under some of the darkest skies on Earth—the galaxy-gazing from camp is unparalleled.

Days 5–7: Ongava Private Reserve / Etosha National Park
Fly north to the Ongava Private Reserve bordering Etosha National Park. The heart of the park is a vast salt pan where perennial springs draw a multitude of game. Visible from space, the pan is the remnant of an ancient lake that existed here 2 million years ago. The landscape now supports grasslands and large camel thorn trees mixed with mopane, also known as ironwood. Bare and dry today, the depression offers Namibia’s best wildlife photography, with elephant, black and white rhino, lion, leopard, cheetah, giraffe, zebra, wildebeest, hartebeest, springbok, oryx, kudu and the diminutive dik-dik drawn to its life-sustaining waterholes, many of which are sourced in natural springs. Birdlife is abundant, and we may see ostrich and raptors. The private Ongava Reserve is a conservation success story, achieved when local families turned unproductive cattle ranches into a 74,000-acre haven for prolific wildlife. Our lodge enjoys an isolated setting on the reserve, with easy access to the national park. Day and night drives and guided walks, plus strategically placed hides, provide varied photographic perspectives on regional wildlife.

Day 8: Ongava / Maun, Botswana / Private Chitabe Concession
Via private chartered plane, we fly direct from Ongava to Maun, Botswana, where we clear customs and continue by air to the private Chitabe Concession in the heart of the Okavango Delta. The delta was formed where the Okavango River, sourced in distant Angola, pours over the sands of the Kalahari to create a green maze of canals and lagoons—in vivid contrast to Namibia’s stark aridity. The watery mosaic sustains a profusion of wildlife, with abundant hoofed game, predators and birds. Botswana’s lush marsh is a UNESCO World Heritage Site, with nearly 5,800 square miles of wetlands, clear channels, lagoons and islands. Our luxury camp within the Chitabe reserve is bordered on three sides by Botswana's famous Moremi Game Reserve, and its density and diversity of wildlife—away from crowds—makes for exceptional photo opportunities.

Days 9–11: Wildlife Photography in the Okavango Delta / Helicopter Safari
The enormous Chitabe reserve comprises a mosaic of ecosystems including waterways and marshlands, dry acacia and mopane woodland, riverine areas, open grasslands and seasonally flooded plains. Such varied habitat supports a variety of wildlife that is constantly on view: elephant, buffalo, lion, leopard, cheetah, and all the plains game including zebra, impala and red lechwe. Wild dogs are also known to frequent the area. Hippos abound in the clear channels that lace the marsh, and birdlife is prolific, with more than 450 species. From our secluded camp base, we have three full days for up-close wildlife viewing and incredible photography. No safari destination surpasses what you’ll find here! In addition to game drives and guided bush walks, capture images from an exhilarating doors-off helicopter flight over the watery maze below. Nights in camp are magical, too, with candlelight dinners followed by campfire time for reflecting on the wonders encountered each day.

Days 12-14: Private Linyanti Reserve—Helicopter Safari
A flight by light aircraft brings us to the private Linyanti Reserve, one of the best wildlife-viewing regions in Botswana. We're based at Savuti Camp in the southern part of the reserve, on the banks of the Savute Channel (yes, two different spellings), an elusive waterway that ebbs and flows creating an ever-shifting habitat for a wide range of game. This is the heart of a legendary wildlife region best known for its large number of predators, as well as one of Africa’s biggest elephant populations. Elephants thrive in the mopane woodlands, especially in winter when they number in the thousands. Besides the typical plains game, the region sustains strong concentrations of roan, sable antelope and southern giraffe. All the predators are found in the area—lion, leopard, cheetah, spotted hyena and wild dog, and we'll photograph them on day and night drives, walks with an armed guide, and from several strategically placed hides. We also get an opportunity for aerial photography of the vast landscape and abundant game on another doors-off helicopter safari during our stay in Linyanti.

Days 15-17: Kasane / Victoria Falls Helicopter Flightseeing / Hwange National Park, Zimbabwe
After clearing immigration in Kasane this morning, we fly to Zimbabwe, with a thrilling aerial photography opportunity over Victoria Falls en route. As part of our helicopter transit, we spend 20-25 minutes shooting the mile-wide cataract from varied angles on a doors-off flight. Then we transfer to a fixed-wing aircraft for more aerial sightseeing before landing in Hwange National Park, our final safari focus. Bordering Botswana and the Kalahari Desert, Hwange is Zimbabwe's largest national park, harboring one of Africa's biggest and most diverse wildlife populations. Its 5,600 square miles are comprised of varied habitats—desert sandveld with teak and mopane woodlands, vast grasslands, and dry acacia scrub interspersed with salt pans and granite outcrops. Hwange's great herds of elephant and Cape buffalo, tens of thousands strong, are a spectacle. Its vital predator population includes lion, leopard, cheetah, wild dog, hyena, black-backed jackal, bat-eared fox and more. The area’s many waterholes attract wildlife in huge concentrations, especially during winter, when animals come in a steady parade to quench their thirst.  Frequently on view are zebra, giraffe, sable, roan, blue wildebeest, impala and endangered gemsbok. White rhinos are another special sight, with several having recently been translocated into the park. The variety of birdlife is among the best in Africa, with more than 400 species. The photography prospects are endless! While our focus is game drives, bush walks with renowned guides are a highlight, as safety permits.

Day 18: Hwange / Victoria Falls / Depart
Our African photo safari comes to a close this morning as we travel from Hwange to the airport in Victoria Falls to meet departing international flights.

Interested in extending your trip? Link it up with another adventure!
Repeater Layout : vertical
Cape Town Extension
Extension