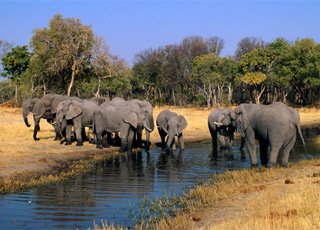 In August 2011, the presidents of the five countries signed a treaty to promote a culture of peace and shared resources as they strengthen regional economies through wildlife tourism. KAZA aims to improve the livelihoods of the 2.5 million people who live in the Okavango and Zambezi river basin regions of Southern Africa.

WWF supported the development of KAZA and will leverage its extensive expertise to ensure that local communities benefit economically from wildlife on their land, through conservation of animals and their habitats and the creation of a world-class tourism experience.

Forty-four percent of Africa’s total elephant population—an estimated 325,000 elephants—live within the KAZA boundaries. Other wildlife in KAZA include hippos, rhinos, lions, and leopards.

KAZA has the potential to address several key issues that impact wildlife populations: