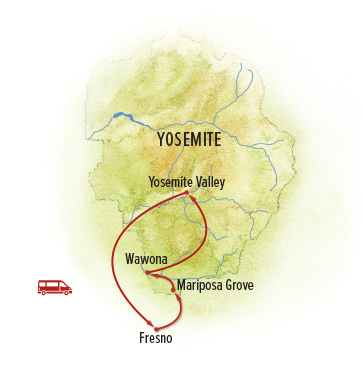 Day 1: Fresno, CA / Fish Camp
Arrive in Fresno, the largest city in California’s 450-mile-long Central Valley. The commercial hub of vast agricultural region, Fresno is surrounded by fruit and nut orchards and vegetable farms. The Sierra Nevada mountain range rises to the east, and Yosemite National Park is less than 70 miles away. Meet your Expedition Leader at the airport, then drive across the San Joaquin Valley and into the Sierra foothills to reach Yosemite National Park. Leaving flat farmland behind, watch the vegetation zones change as we ascend from scrub and chapparal to the lower montane forest characterized by ponderosa pine, California black oak, white fir and incense-cedar. Reaching Fish Camp, surrounded by the Sierra National Forest, we tuck into Tenaya Lodge, a renowned mountain resort on the edge of the park, for a two-night stay.

Day 2: Mariposa Grove / Wawona / Fish Camp
From Fish Camp, just outside the park boundary, we have quick access this morning to Mariposa Grove, where more than 500 giant sequoias—the arboreal patriarchs of Yosemite—are found. In 1864, President Lincoln signed the Yosemite Land Grant Act, protecting Mariposa Grove and Yosemite Valley for "public use, resort, and recreation," seeding the concept for America’s national parks. This landmark legislation, enacted during the Civil War, marked the first time the U.S. government set aside scenic natural areas to be preserved for future generations. Yosemite National Park was created in 1890, and Mariposa Grove was later added to it in 1906. On a walk through the grove, we’ll view the most famous trees including the 3,000-year-old Grizzly Giant and drive-through Tunnel Tree.

Continue to Wawona for an immersion in Yosemite’s early history. This wide-open basin was home to Native Americans and a primary thoroughfare for early travelers to the park. On a visit to the Pioneer Yosemite History Center, learn how Yosemite became an inspiration for national parks throughout the nation and world. This afternoon, a walk through Wawona Meadow reveals emerging wildflowers. By mid-May, Yosemite Valley starts bursting with shooting stars, showy milkweed, cow parsnip, western azalea, pine violets, evening primrose, seep-spring monkeyflower, Applegate’s paintbrush, baby blue eyes, bird's eyes, larkspur and dogwood. These first spring blooms are followed by goldenrod, Sierra lessingia, sneezeweed, woolly mule-ears and many more, which we seek out on walks and hikes during our time in the park.

Days 3-5: Exploring the Yosemite Valley
Traveling north from Fish Camp, head into the heart of the park where we’ll have commanding views of Yosemite Valley and its dramatic surroundings. Photograph the 3,000-foot vertical face of El Capitan, the sheer granite wall of Half Dome, and the silver ribbon of the Merced River. Celebrated photographer Ansel Adams, who lived several summers in Yosemite in the 1920s, called the valley "always a sunrise, a glitter of green and golden wonder in a vast edifice of stone and space."

Yosemite’s famous waterfalls are a main attraction, and we are here during peak runoff, an exhilarating time to view these renowned sights. At 2,425 feet, Yosemite Falls is the tallest in the park and one of the highest in the world, plummeting in three tiered cascades to the valley floor. Many visitors don’t realize the park’s waterfalls are seasonal phenomena, and Yosemite Falls is often dry by late July. Other spectacles include Bridalveil Falls, Sentinel Falls, Ribbon Fall and Vernal Fall. In some cases, trails offer the best vantage point on various waterfalls. And since we travel with two Expedition Leaders, we are able to divide up for easier and more challenging hikes according to personal preference. Walks and hikes will also focus on wildflowers, and our guides know the best places to find the emerging spring splendor.

Wildlife abounds in the park, though larger mammals, such as black bears, bighorn sheep, mule deer, coyotes and red fox often remain hidden. Birds, on the other hand, are prominent everywhere: of Yosemite’s 262 bird species, 165 are year-round park residents. During our visit we meet a fire ecologist who shares the history of fires in Yosemite and enlightens us about the impact and importance of fire ecology on the landscape. Floating the Merced River may also be an option on June departures, depending on water levels.

Day 6: Fresno / Depart
After breakfast, a transfer is provided from Rush Creek Lodge to the Fresno airport to connect with departing flights. En route, we stop at the Yosemite Climbing Museum in Mariposa to learn about some of the valley's pioneering climbers and first ascents of its storied granite walls. Opened in 2019, the museum pays homage to the bold and visionary athletes who have made their way up the vertical heights of Yosemite's famous faces, showcasing classic climbing images and highlighting innovative gear from past to present. Learn about rock scalers from Royal Robbins, who was one of the first to free-climb (without ropes) in Yosemite in the 1950s, to Alex Honnold, who made the first free solo of El Cap in 2017, in just under 4 hours. Regaled by stories of global daring and achievement, it's time to leave Yosemite in the rearview mirror as we conclude our California adventure at the Fresno airport.
Repeater Layout : vertical