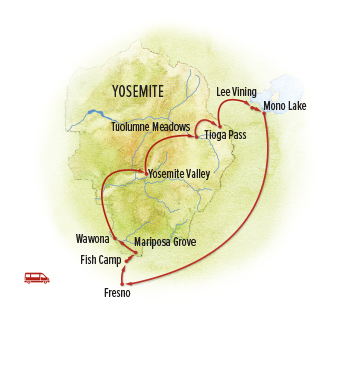 Day 1: Fresno, CA / Fish Camp
Arrive in Fresno, the largest city in California’s 450-mile-long Central Valley. The commercial hub of vast agricultural region, Fresno is surrounded by fruit and nut orchards and vegetable farms. The Sierra Nevada mountain range rises to the east, and Yosemite National Park is less than 70 miles away. Meet your Expedition Leader at the airport, then drive north across the San Joaquin Valley and into the Sierra foothills to reach Yosemite National Park. Leaving flat farmland behind, watch the vegetation zones change as we ascend from scrub and chapparal to the lower montane forest characterized by ponderosa pine, California black oak, white fir and incense-cedar. As we traverse the varied terrain, we'll notice the impact of fire in the different vegetation zones—a phenomenon we witness in different settings throughout our journey as we gain an understanding of how fire ecology shapes the ecosystem. Reaching Fish Camp, surrounded by the Sierra National Forest, we tuck into Tenaya Lodge, a renowned mountain resort on the edge of the park, for a two-night stay.

Day 2: Mariposa Grove / Wawona / Fish Camp
From Fish Camp, just outside the park boundary, we have quick access this morning to Mariposa Grove, where more than 500 giant sequoias—the arboreal patriarchs of Yosemite—are found. In 1864, President Lincoln signed the Yosemite Land Grant Act, protecting Mariposa Grove and Yosemite Valley for "public use, resort, and recreation," seeding the concept for America’s national parks. This landmark legislation, enacted during the Civil War, marked the first time the U.S. government set aside scenic natural areas to be preserved for future generations. Yosemite National Park was created in 1890, and Mariposa Grove was later added to it in 1906. On a walk through the grove, we’ll view the most famous trees including the 3,000-year-old Grizzly Giant and drive-through Tunnel Tree.

We are immersed in Yosemite’s early history at Wawona, a wide-open basin that was home to Native Americans and a primary thoroughfare for early travelers to the park. On a visit to the Pioneer Yosemite History Center, learn how Yosemite became an inspiration for national parks throughout the nation and world. In the decades since, Yosemite's incomparable grandeur has drawn countless visitors. Yet people's presence on this land goes back millennia, and we learn about the original inhabitants, early white settlers, tourists, climbers, rangers and more who have been using, abusing, loving, and protecting Yosemite for hundreds and even thousands of years. Find out how the idea for a public park formed and the challenges that exist in protecting and preserving the Yosemite today. This afternoon, escape the crowds on a walk in Wawona Meadow where wildflowers grace the trails in season before returning to Tenaya Lodge for a second night.

Day 3: Glacier Point / Yosemite Valley
Leaving Fish Camp this morning, we head deeper into the park via famous Glacier Point Road, making our first stop at Glacier Point for a commanding view of Yosemite Valley, Half Dome, Yosemite Falls and the alpine high country beyond. Continue to Sentinel Dome and Taft Point, with a morning hike in the area before a picnic lunch. This afternoon, we pause at Tunnel View to survey the grand entrance to Yosemite Valley. Famed photographer Ansel Adams, who lived several summers in Yosemite in the 1920s, called the valley "always a sunrise, a glitter of green and golden wonder in a vast edifice of stone and space." When snowmelt runoff is sufficient, waterfalls pour from on high, and we may stop at several, including Bridalveil Falls. Our destination for the next three nights is the fabled Ahwahnee Hotel, and since we are privileged to stay inside the park bounds, we have access to the valley floor in the early morning and late evening hours when the daytripper crowds are gone.

Days 4 & 5: Exploring & Hiking in the Yosemite Valley
From our coveted location on the valley floor, we have easy access to all the legendary sights, from the 3,000-foot vertical face of El Capitan to the sheer granite wall of Half Dome, Yosemite Falls and Vernal Falls in season, and the silver ribbon of the Merced River. Those who wish may choose an optional float trip (included) when water levels permit. And since we travel with two Expedition Leaders, we’re able to divide up for easier and more challenging hikes according to personal preference.

Geology is a major focus of our learning experience, as our guides reveal the forces that formed the park's world-famous monoliths. The sheer granite faces, peaks and domes serve as our classroom, where we witness how volcanism and glaciation formed this astounding environment. As we stand among these great edifices, we see with our own eyes and touch with our own hands the evidence of massive ancient glaciers. Fire, too, has been a powerful force on this landscape, and we'll hear from a fire ecologist who shares the history of fires in Yosemite, enlightening us about the impact and importance of fire on the landscape, including its regenerative potential when managed properly. Other guest speakers may include conservationists from the Yosemite Conservancy and wildlife managers. Wildlife abounds in Yosemite, though larger mammals, such as black bears, bighorn sheep, mule deer, coyotes and red fox, often remain hidden. Look, too, for some of the park's 262 bird species—165 are year-round residents.  We'll also have a chance to do some stargazing, identifying bright constellations in the dark Sierra skies, conditions permitting.

Day 6: Yosemite’s High Country / Tioga Road / Tuolumne Meadows / Lee Vining
Spend the day following the Tioga Road, a 47-mile scenic drive that connects Crane Flats with 9,943-foot Tioga Pass. The highest automobile road in California, it offers endless panoramas of forested mountainsides, meadows, lakes and granite domes. We stop to view many highlights along the way, which may include North Dome, Olmsted Point, Soda Springs, Tioga Lake and Dana Meadows. The alpine scenery in the park’s higher eastern elevations is splendid, and summer wildflowers often dot the expansive high-country meadows with color. Enjoy easy hikes away from the road and crowds. Crossing Tioga Pass, descend to the eastern flank of the Sierras where we spend the night at a lodge in Lee Vining near Mono Lake.

Day 7: Mono Lake—Canoeing / Bodie State Historic Park / Tuolumne Meadows / El Portal
Rise early to watch the sunrise over Mono Lake, when the tufa towers—limestone pinnacles that rise out of the lake's surface—are illumined in dawn’s golden glow. Formed at least 760,000 years ago, this saline soda lake has no outlet, causing high levels of salts to accumulate and making its water alkaline. Mono Lake forms an important oasis in the arid Great Basin, filled with brine shrimp that create vital habitat for 2 million migratory and nesting birds. Learn about the fascinating geology of the area over a picnic breakfast in the field, followed by a private canoe paddle on the lake. Then it's off to Bodie State Historic Park, set in a remote high valley east of Mono Lake, to explore the ghost town on the site of one of California's richest gold strikes.

We then head back over Tioga Pass, with entirely different views unfolding as we travel westward, cresting the high mountain saddle and dropping back down into Yosemite Valley. The park roadway, which crosses the southern edge of subalpine Tuolumne Meadows at 8,600 feet, is the only roads across the High Sierra until you are south of Mt. Whitney—marking the northern end of the largest contiguous roadless wilderness in the continental U.S. We stop to hike in the meadows, filled with wildflowers in season. The Tuolumne River meanders quietly through the meadow channel, cascading over the granite river bottom against a backdrop of rugged peaks and glacially carved domes. Declared a Wild and Scenic River by Congress in 1984, the Tuolumne originates in the high country near the east side of the park. By early evening, we exit the park at El Portal, winding up our Sierra sojourn with a farewell dinner tonight.

Day 8: Yosemite Climbing Museum / Fresno / Depart
After breakfast, a transfer is provided to the Fresno airport to connect with departing flights. En route, we stop at the Yosemite Climbing Museum in Mariposa to learn about some of the valley's pioneering climbers and first ascents of its storied granite walls. Opened in 2019, the museum pays homage to the bold and visionary athletes who have made their way up the vertical heights of Yosemite's famous faces, showcasing classic climbing images and highlighting innovative gear from past to present. Learn about rock scalers from Yvon Chouinard and Royal Robbins, the pioneers of clean climbing (without pitons, which can damage rock) to Alex Honnold, who made the first free solo of El Cap in 2017 in just under 4 hours. Regaled by stories of global daring and achievement, it's time to leave Yosemite in the rearview mirror as we conclude our California adventure at the Fresno airport.