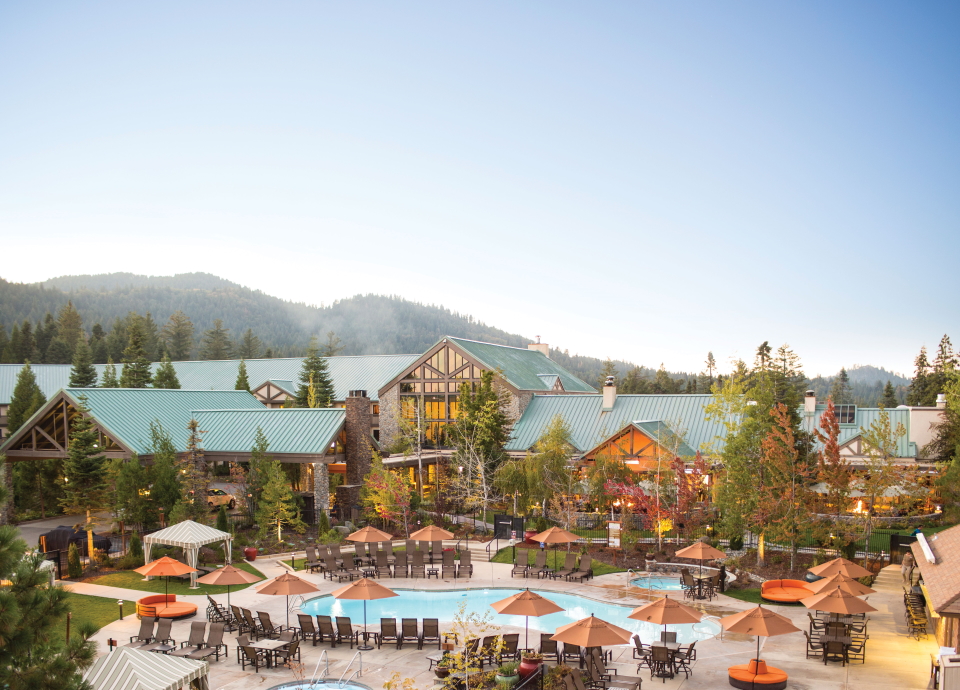 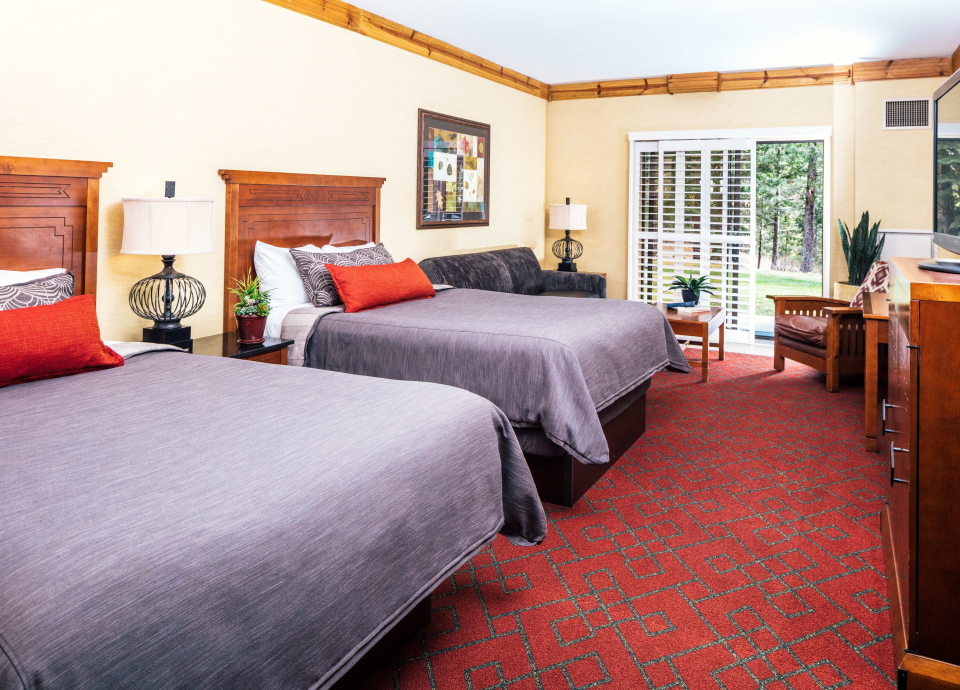 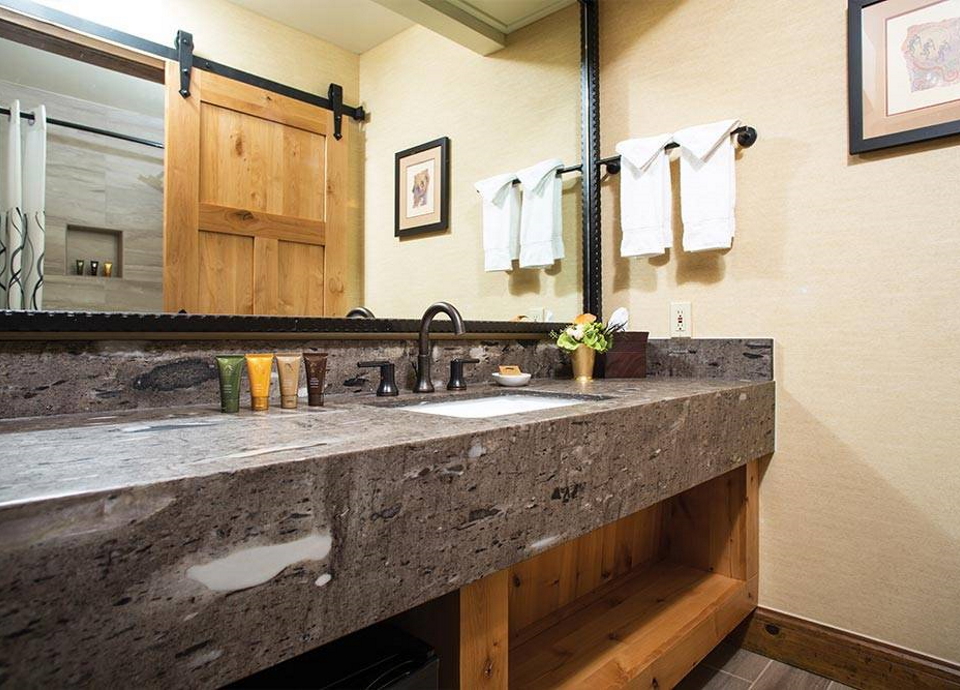 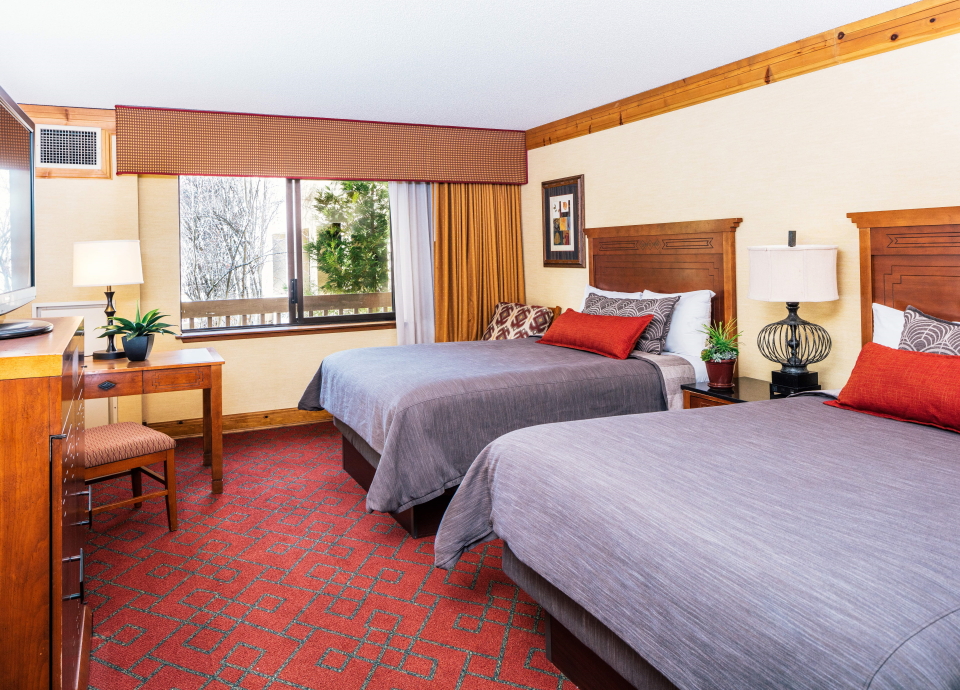 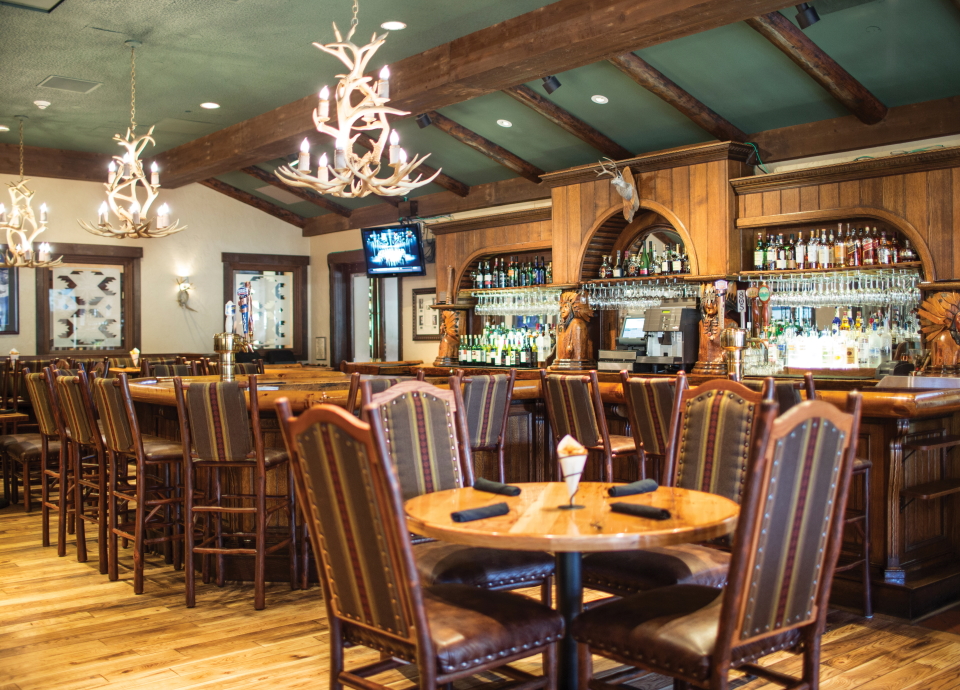 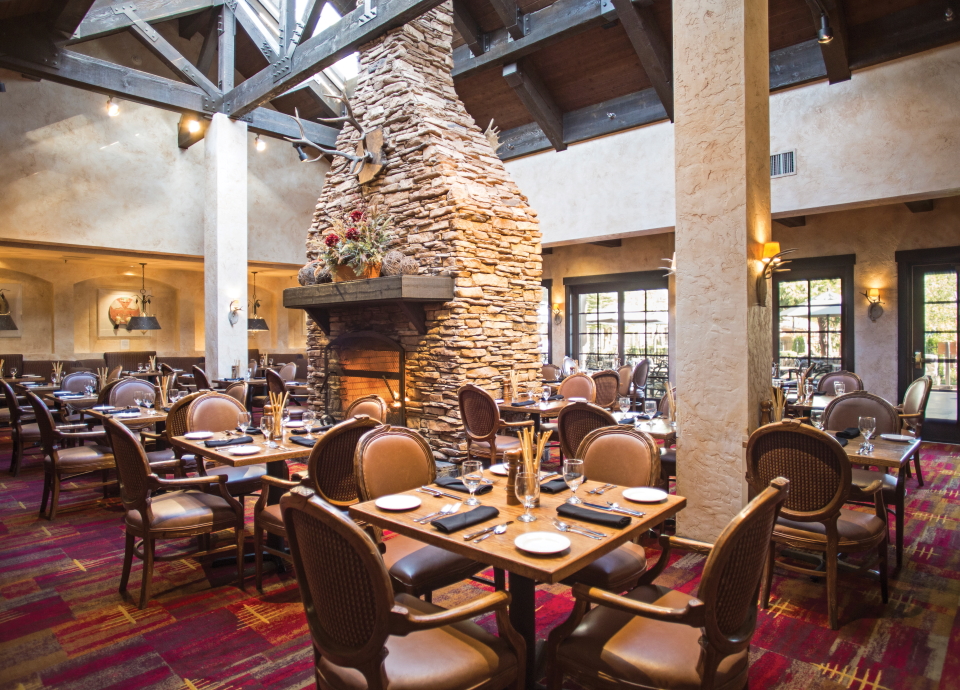 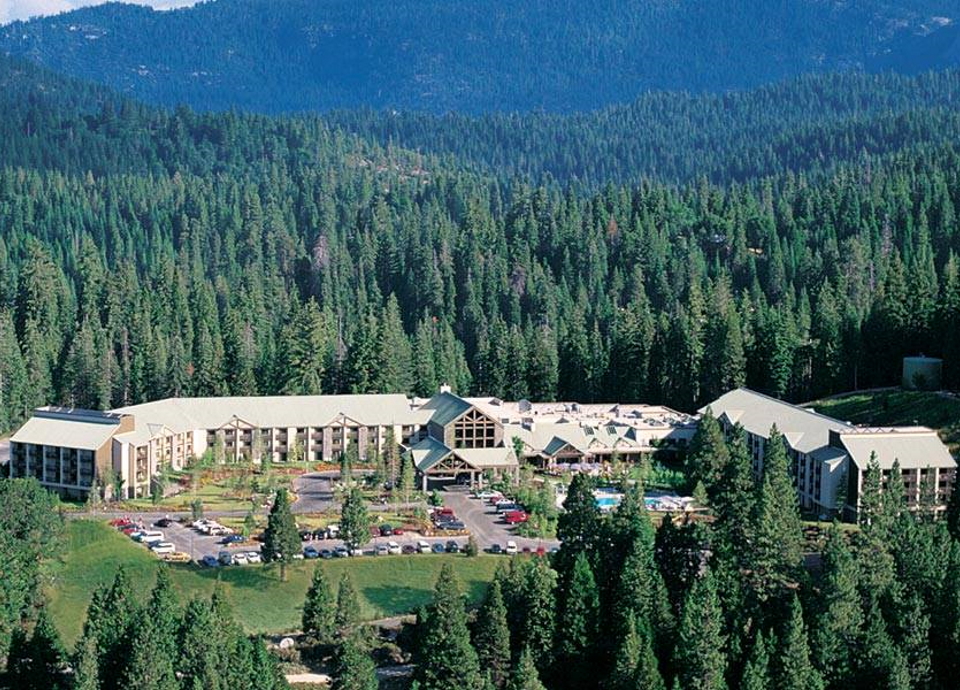 Located just outside the south entrance to Yosemite National Park in Fish Camp, Tenaya Lodge is a AAA 4-Diamond resort offering mountain-style elegance in the Central California High Sierra. The lodge enjoys a magnificent setting, surrounded by ponderosa pine forest with trails right outside the door. But the property is so inviting that guests may not want to leave the site, with its expansive view terraces, two swimming pools, Jacuzzi pools and world-class Ascent Spa. Architecture and interior decor complement the natural setting and regional history, with extensive use of wood, stone, rustic chandeliers and Native American motifs. Rooms were given a major facelift in 2016, updated in warm tones reflecting the park’s natural features. Our accommodations inside the main lodge building are in spacious 350-square-foot premium rooms with two queen beds and deluxe bathrooms with sleek granite countertops. All rooms have air conditioning, Wi-Fi, flat screen TV, writing desk, safe, fridge and coffee machine.
The Ahwahnee Hotel 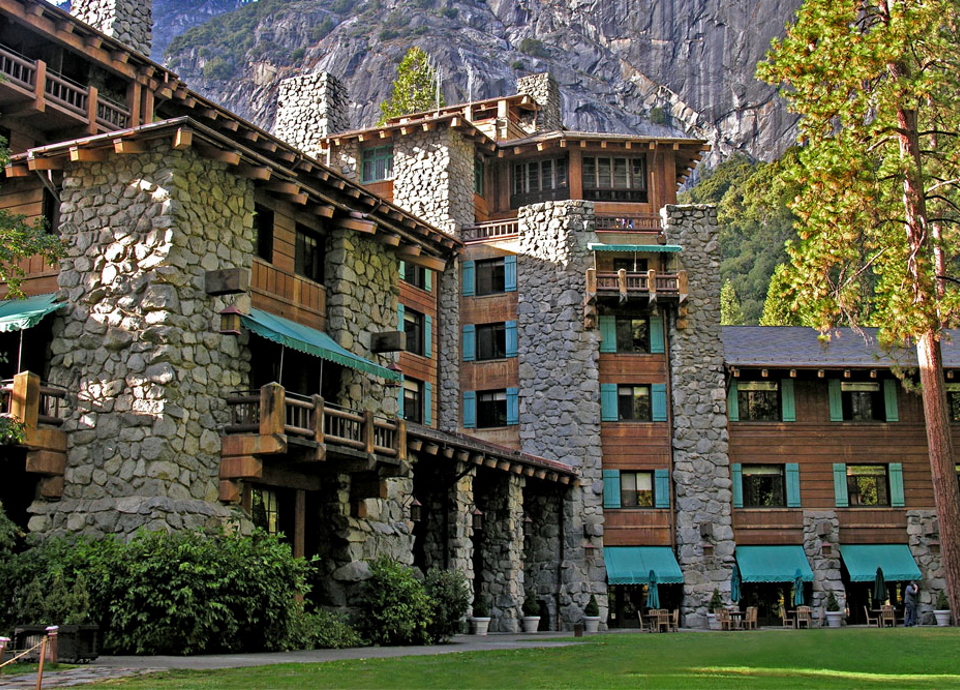 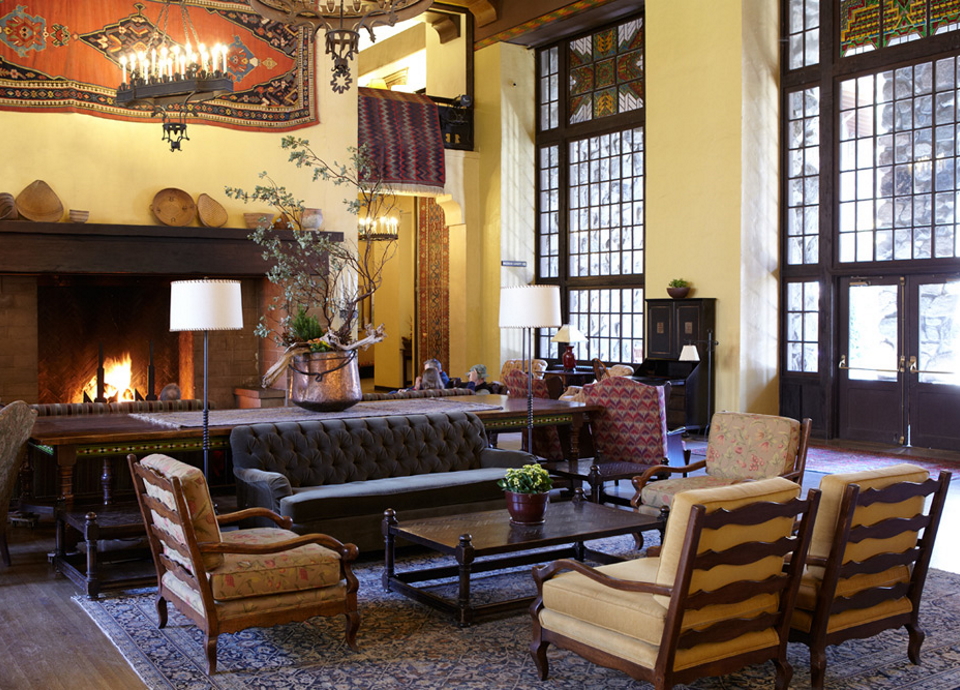 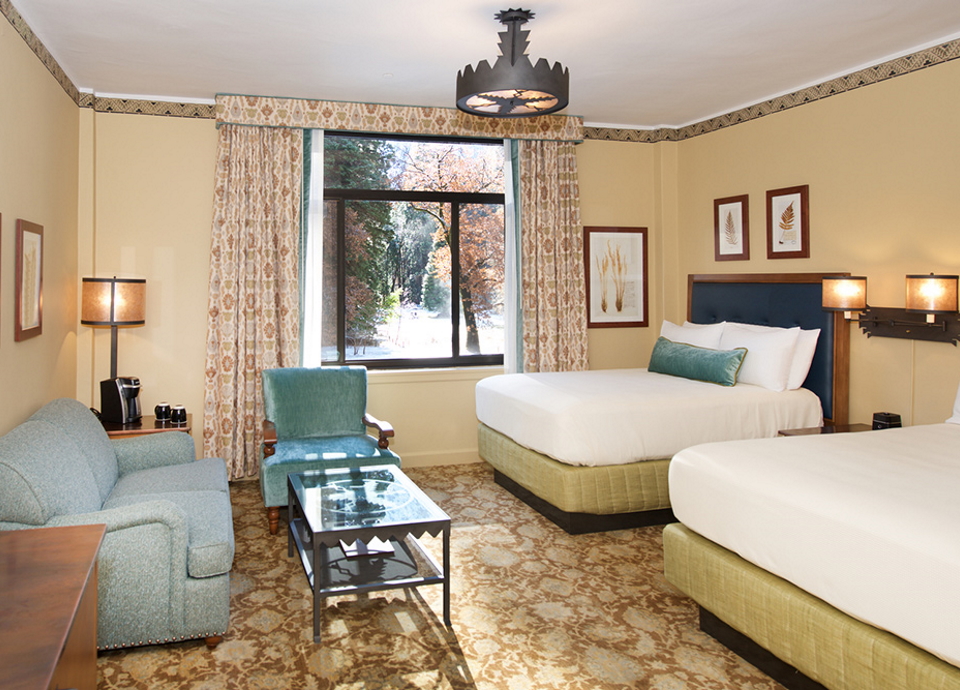 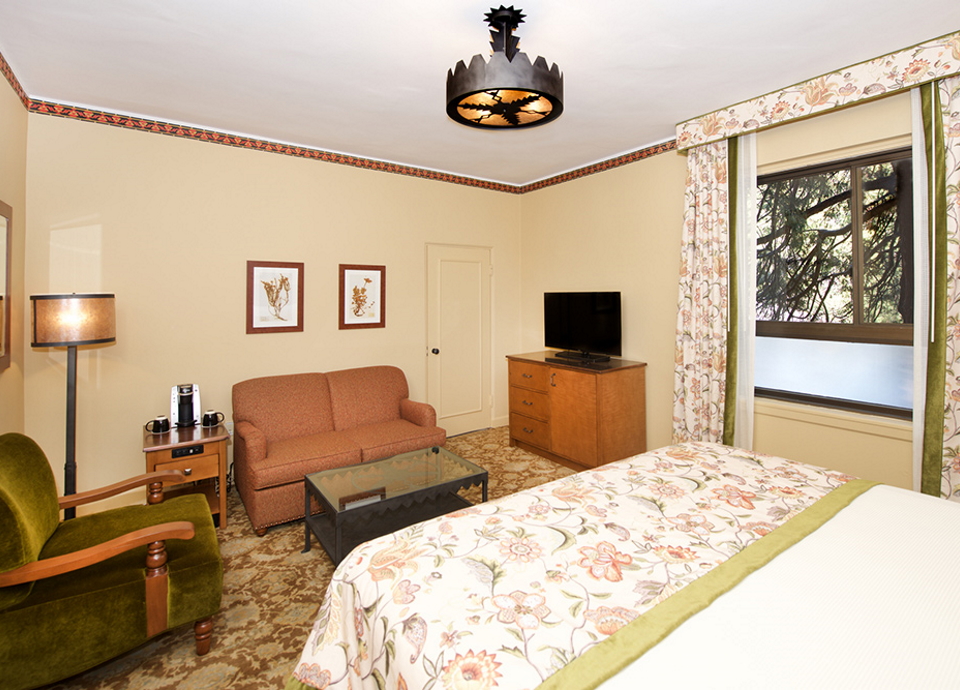 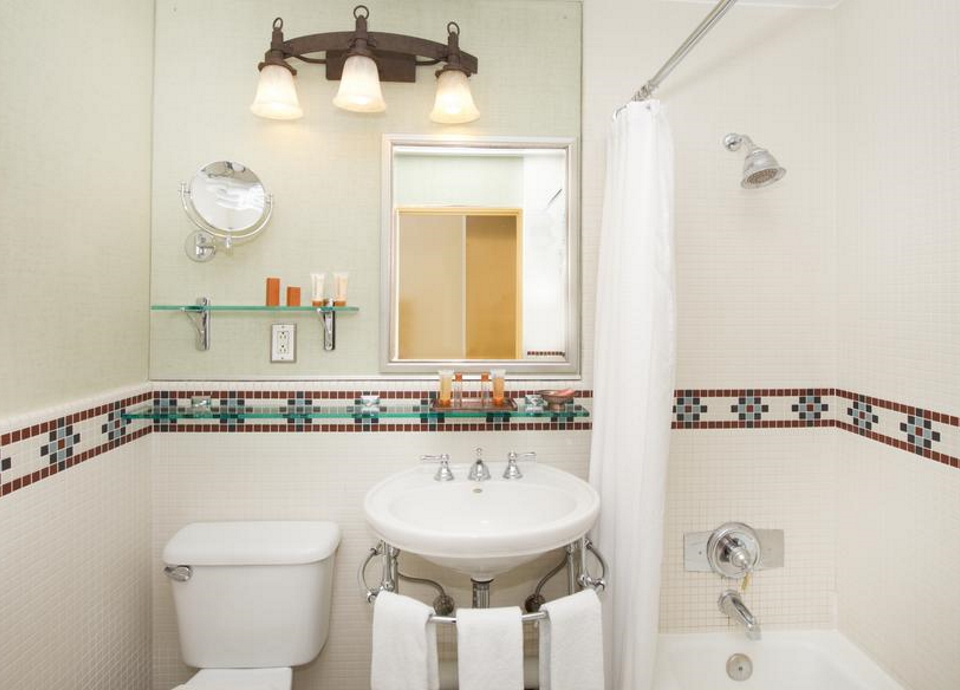 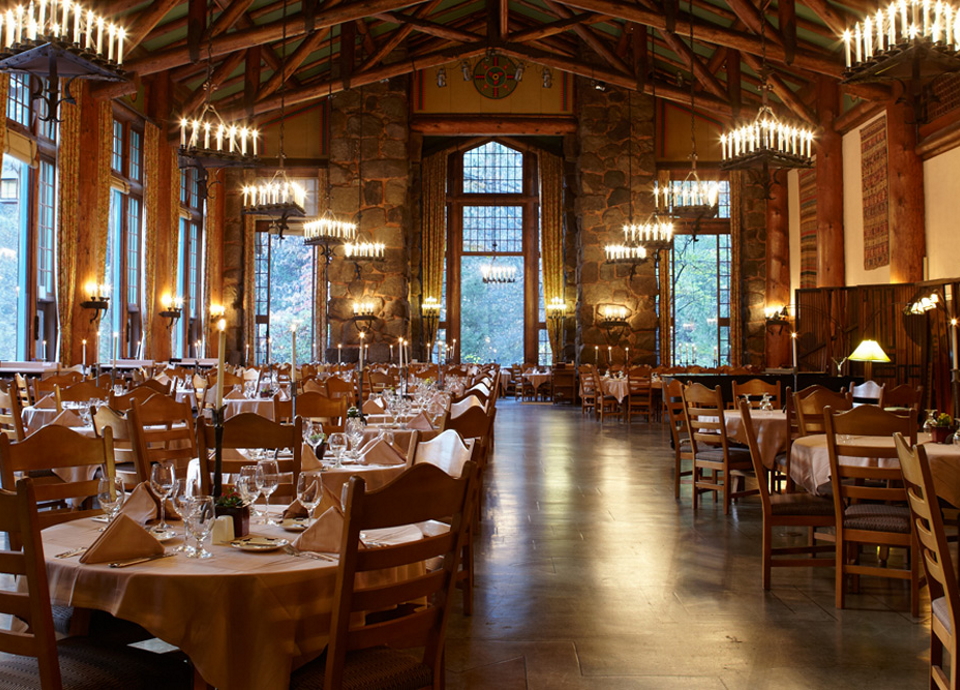 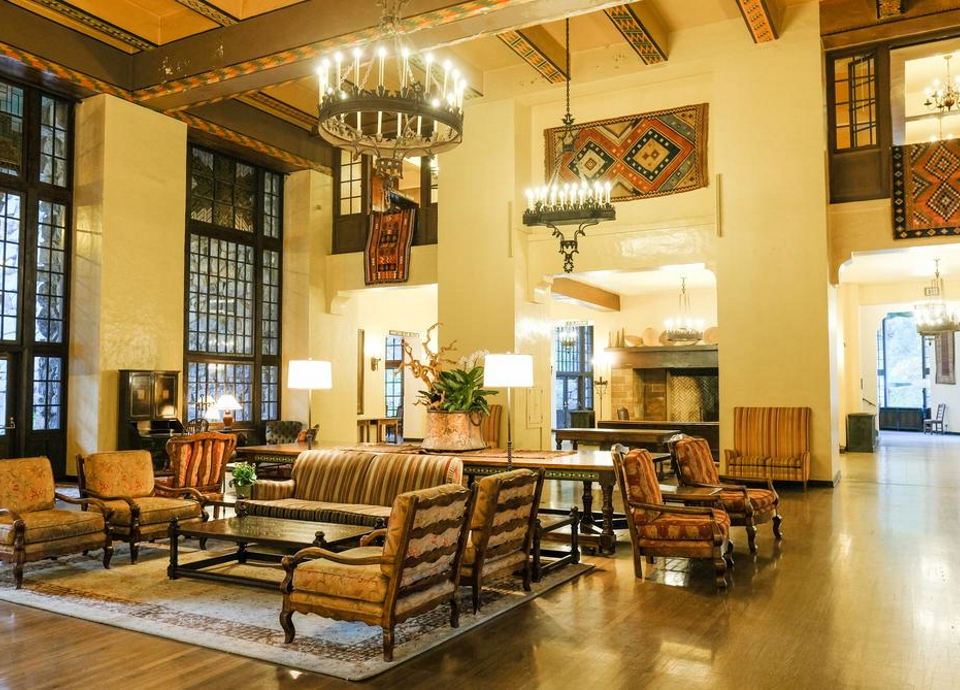 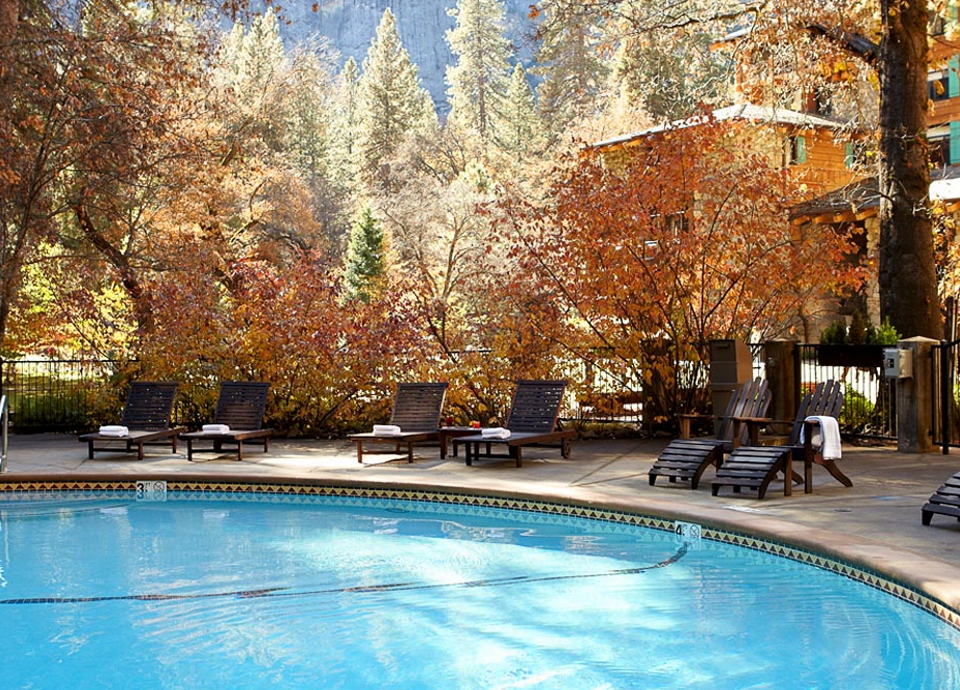 The Ahwahnee is a legend among the country’s most distinguished national park lodges. At the east end of Yosemite Valley, The Ahwahnee is surrounded by many of the park’s most famous icons. A casual stroll of the hotel grounds reveals views of Half Dome, Yosemite Falls and Glacier Point. Ahwahnee, which means “land of the gaping mouth,” was the name the first residents gave to Yosemite Valley.

To stay at The Ahwahnee is to be immersed in a storied history. Stephen T. Mather, an American conservationist and the first director of the National Park Service, sought to find ways to increase support and funding for the young National Park Service. Building a world-class hotel to attract influential visitors to Yosemite, his personal favorite within the park system, was one of his strategies. Mather enlisted an architect with the status and talent that could create what he envisioned: Gilbert Stanley Underwood. Harvard-educated Underwood had already designed the magnificent lodges in Bryce Canyon and Zion national parks, and The Ahwahnee was another landmark in creating his signature style that came to be known as “national park rustic.” Completed in 1927, The Ahwahnee was created with the goal of attracting well-heeled travelers, enticing them to see the highlights celebrated by the park’s conservation champion John Muir, among others.

In the century since, The Ahwahnee has fulfilled that ambition, hosting presidents, royalty and numerous famous personalities. The Grand Lounge provides a stunning entry, with its tall mullioned windows, heavy stucco walls, Native American textiles and baskets, and massive chandeliers suspended from a soaring ceiling supported by heavy beamed trusses. The Ahwahnee Dining Room is a destination in its own right, with massive stone columns and floor-to-ceiling windows more than 30 feet high showcasing the striking views beyond. Recently remodeled rooms feature pillowtop mattresses and updated fabrics and furniture that retain a sense of classic elegance. Amenities include Wi-Fi, flat screen TV, refrigerator and coffee maker.
Lake View Lodge 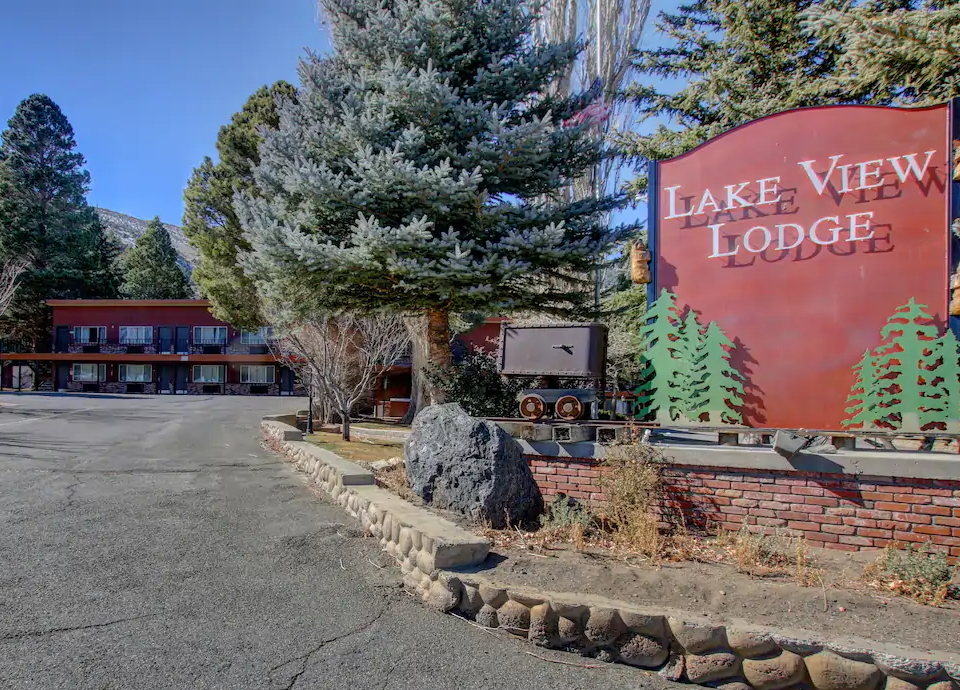 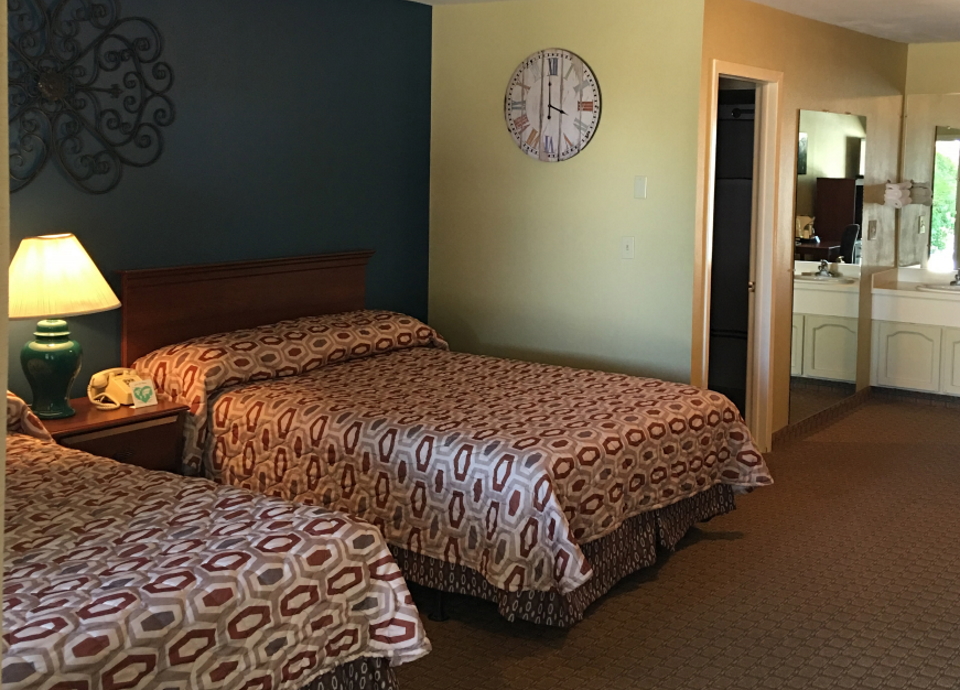 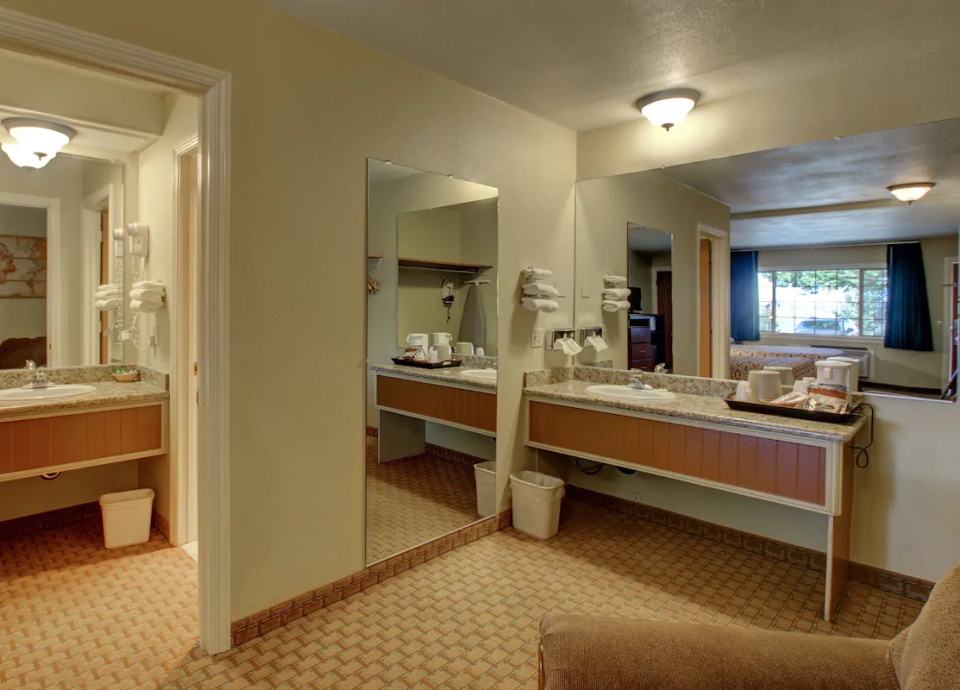 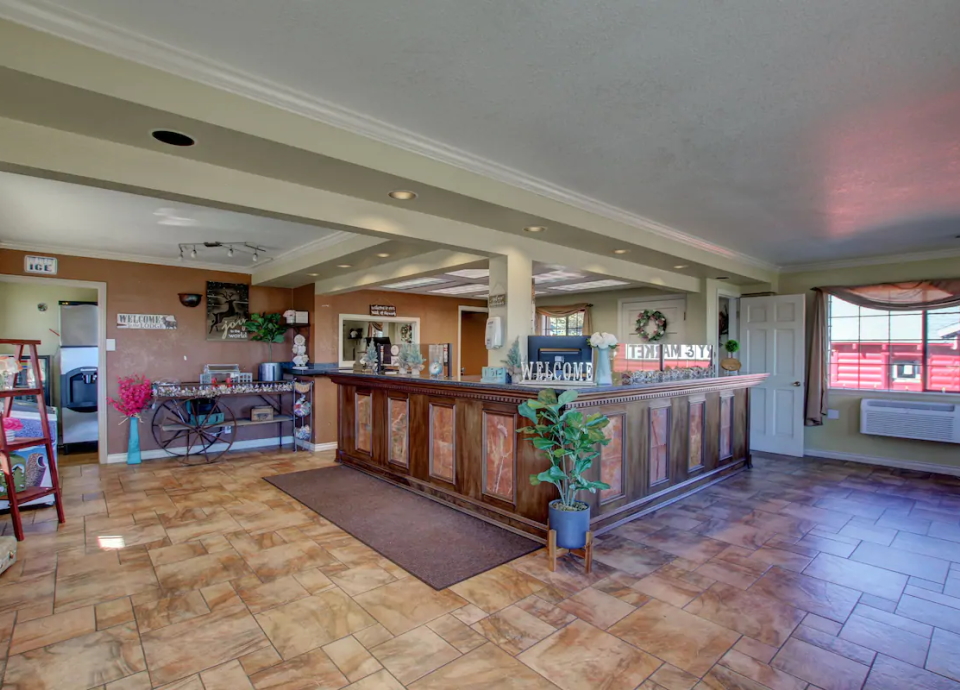 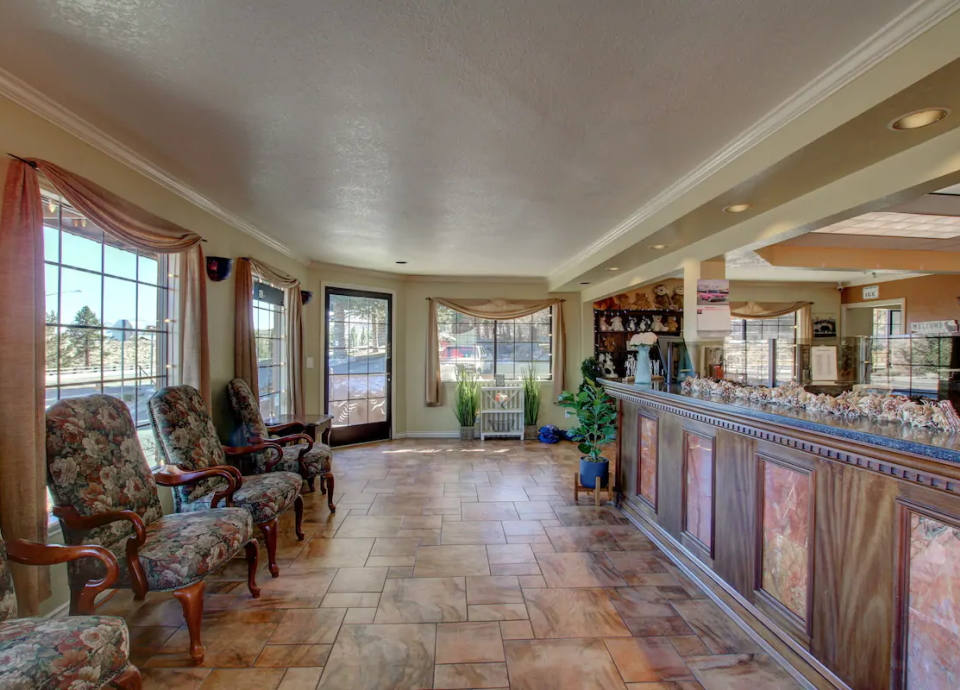 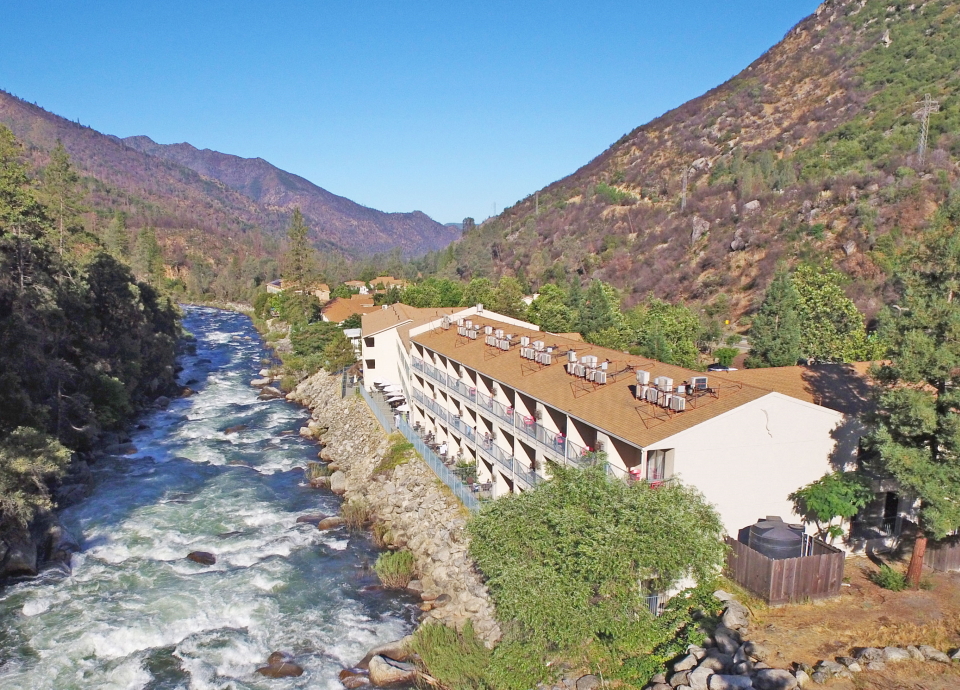 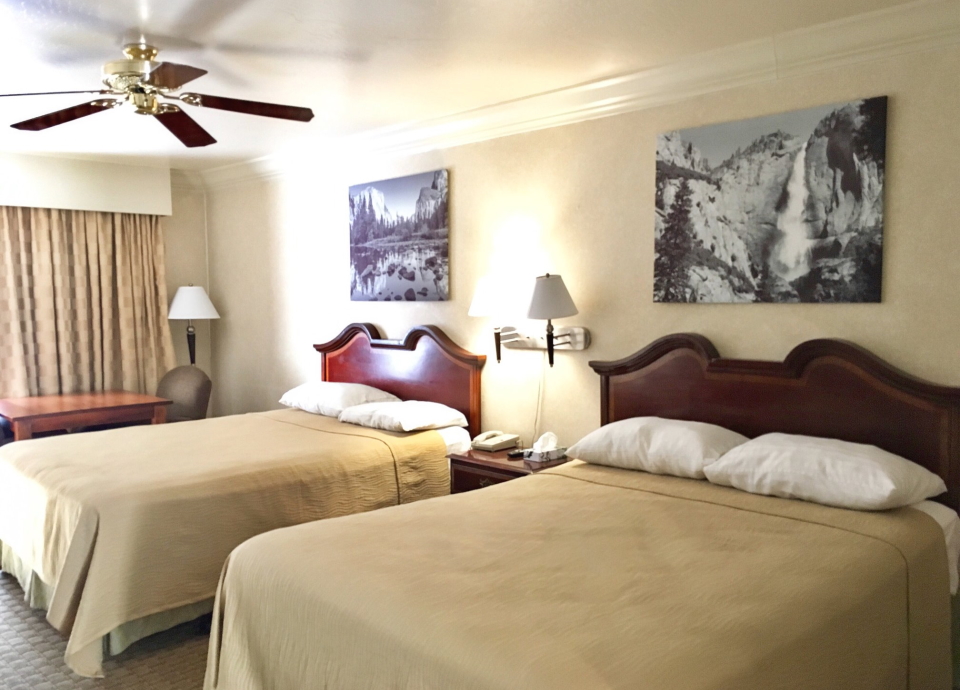 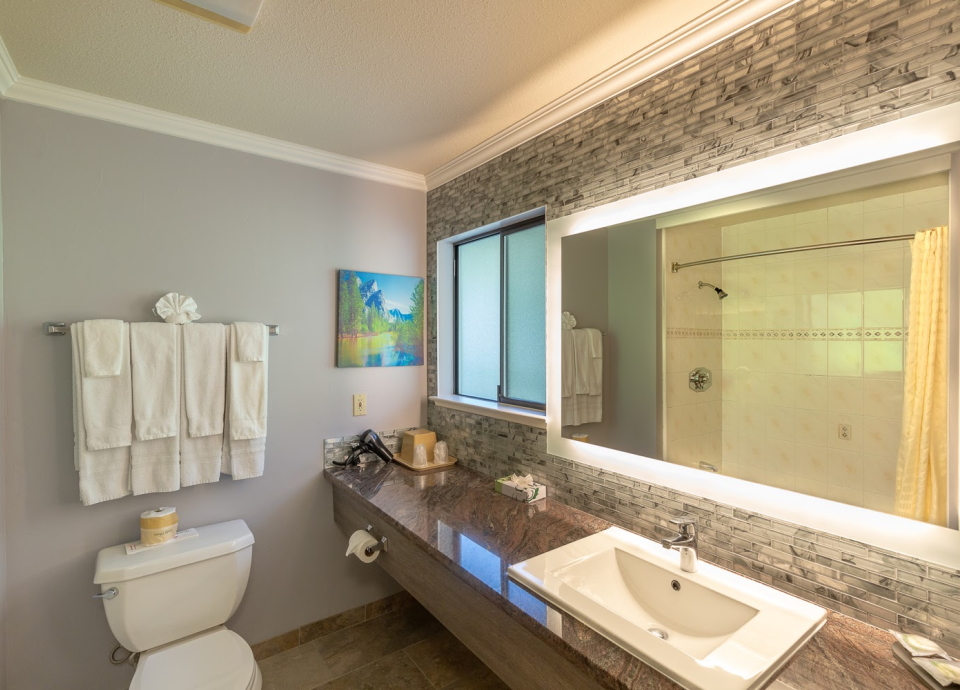 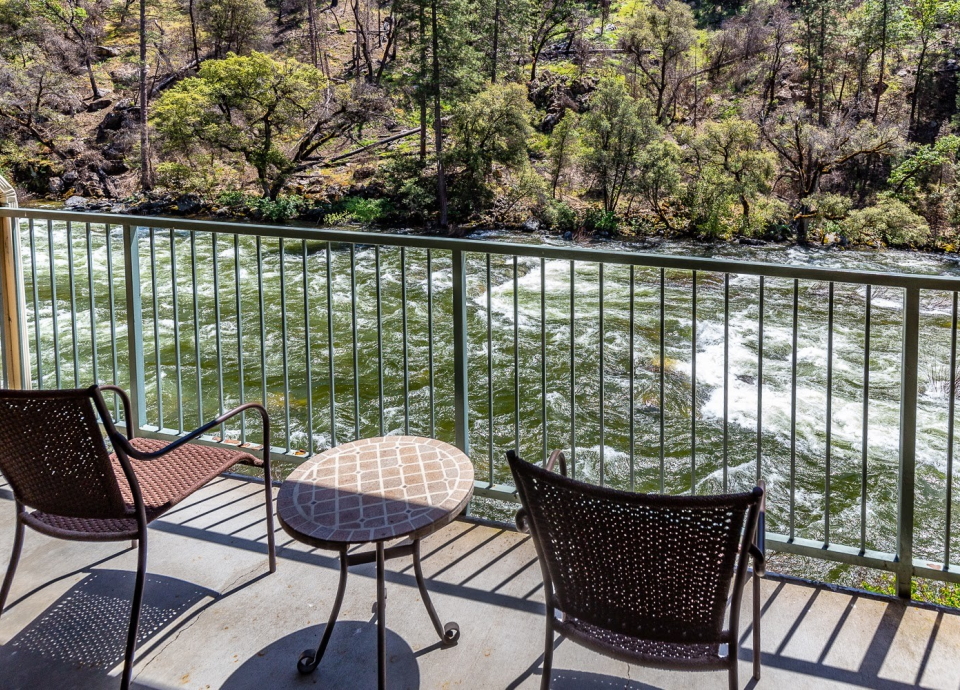 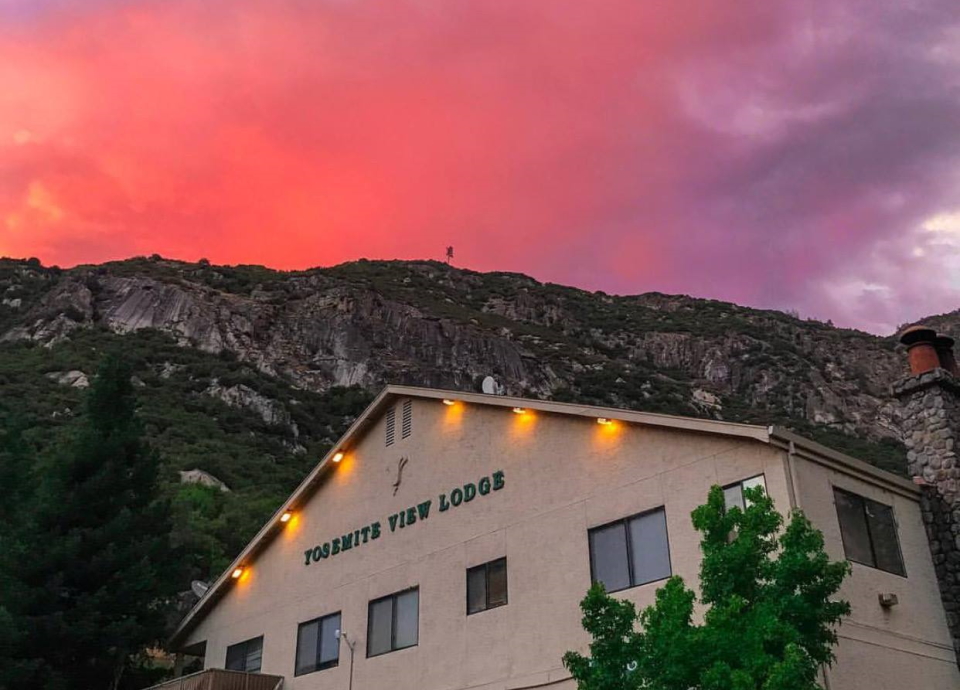 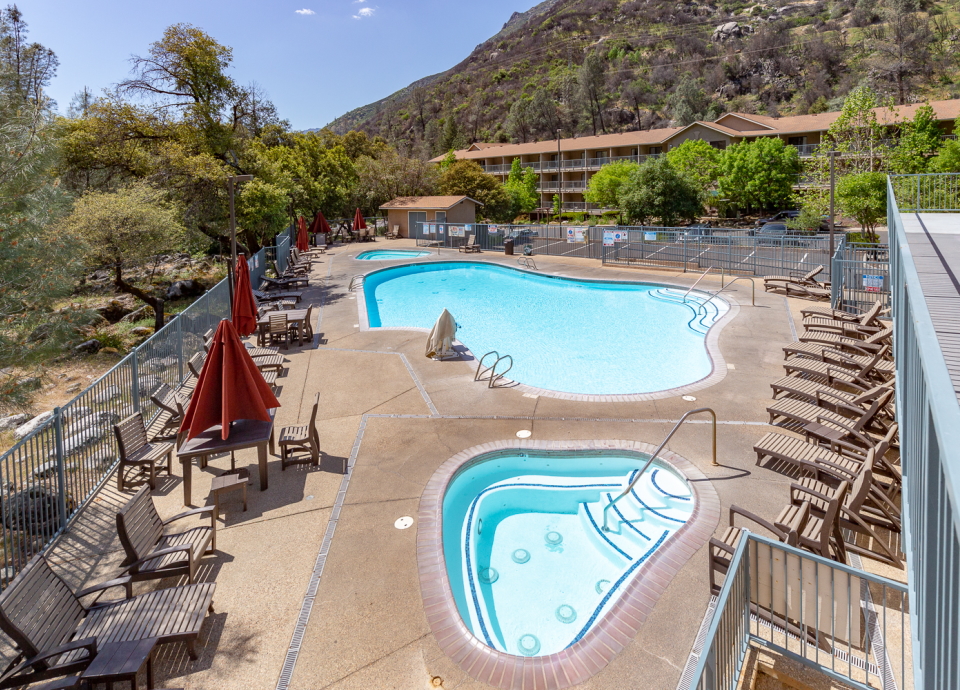 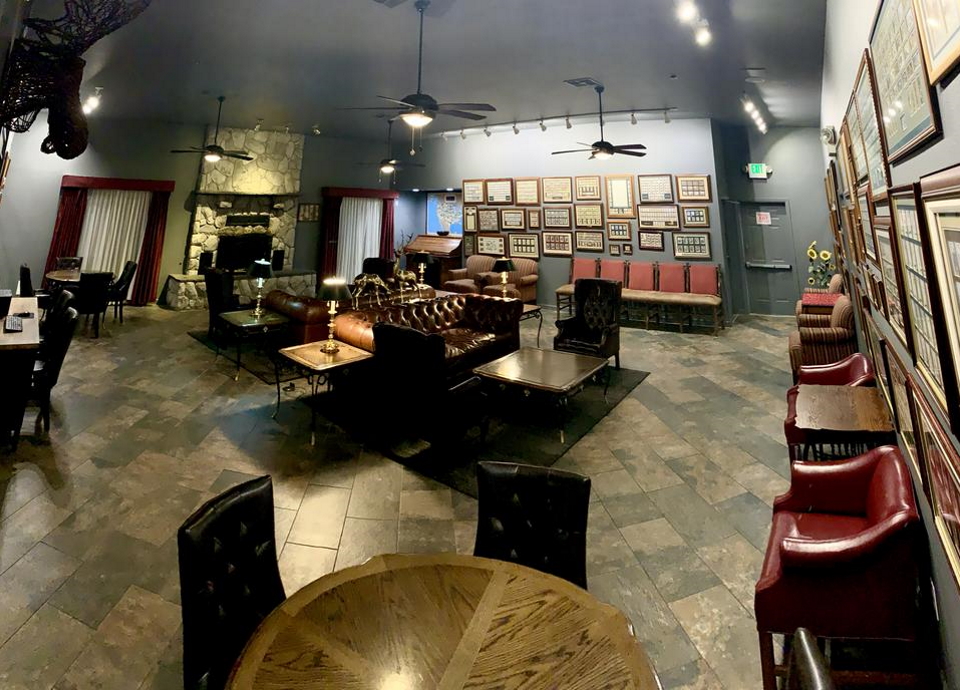 Yosemite View Lodge, tucked between granite mountains on one side and the rushing Merced River on the other, is the closest accommodation to Yosemite National Park’s western entrance. Well-appointed spacious rooms include kitchenettes, sitting areas and private balconies overlooking the river. Soaking opportunities abound, with three outdoor swimming pools and six outdoor spas, as well as an indoor swimming pool and indoor spa. The on-site River Restaurant and Lounge welcomes diners with cozy, mountain-cabin ambience, and also features outdoor patio seating a stone’s throw from the river. The seasonal Parkside Pizza restaurant, also on site, offers a more casual setting. After an invigorating day of hiking in Yosemite Valley or Tuolumne Meadows, what could be better than falling asleep to the soothing sound of flowing water drifting up from the river below?
Questions?
We've Got Answers!
Talk with an Adventure Specialist
Call Our Boulder Office at 800-543-8917 or contact your travel advisor.
We're Proud of the Reputation We’ve Earned