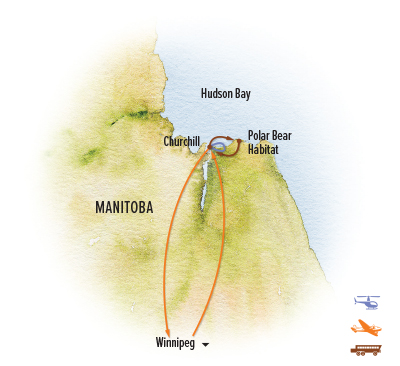 Day 1: Winnipeg, Manitoba
Our polar bear trip begins in the vibrant city of Winnipeg, once a fur-trading center and later a boomtown for the Canadian Pacific Railway on the eastern edge of the vast Canadian prairie. Today, Winnipeg is Manitoba’s cultural, commercial and provincial capital. Transfer on arrival to the historic Fort Garry Hotel, grande dame of Winnipeg hospitality and one of the city’s most prestigious landmarks. Meet your Expedition Leader at a welcome dinner this evening.

Day 2: Winnipeg / Churchill—Evening on the Tundra
Fly to Churchill via our private chartered plane and explore this remote frontier town on a guided tour with our Expedition Leader. Originally a Hudson's Bay Company fur-trading post, Churchill is home to just under a thousand people and, in late fall, a few hundred polar bears that congregate along the shores of Hudson Bay. We head to the tundra this evening in search of our first glimpse of bears. Dinner is served aboard our heated Polar Rover as we experience the wonder of an Arctic night.

Day 3: Helicopter Tour / Dog Sledding / Cultural Encounters
An exciting adventure is in store as we survey Hudson Bay, the surrounding tundra and boreal forest from a helicopter. Looking down on the vast expanse of wilderness below, we may see roaming polar bears and caribou. The helicopter descends for a landing, and we disembark to explore the tundra on foot, looking for Arctic fox and Arctic hare, and perhaps even crawling inside an unoccupied polar bear den. Later, we  try a more traditional means of Arctic transportation on an authentic dog-sledding excursion. Meet a local musher, visit with the dogs, observe the team as they prepare for the run, then head out for an unforgettable ride behind an eager team of huskies!

Our immersion in northern life continues as hosts from Churchill's Indigenous communities tell us about their traditions and daily lives. These captivating storytellers share tales from their personal and collective histories, offering insight into the cultures that have flourished for thousands of years in this harsh environment. We also visit Churchill's Itsanitaq Museum, with artifacts collected from centuries of local habitation.

Day 4: Polar Bear Viewing
Our exclusive Polar Rovers are our mobile means for a full day on the tundra among the polar bears. Although these custom-designed vehicles accommodate more than 30 passengers, we take a maximum of 15, ensuring everyone has a window seat and unimpeded access to watch and photograph polar bears. Our Expedition Leaders know the best places to look for bears, which are waiting for Hudson Bay to freeze so they can begin their winter seal-hunting season on the ice. As we watch the bears interact, we are delighted by their antics and rugged beauty. Return to town for dinner, followed by a presentation on wildlife or cultural aspects of life in the Canadian North.

Day 5: Polar Bear Viewing / Aurora Domes
Once again we board our Polar Rover for a full day of wildlife watching and exploring the subarctic landscape. Our pace is leisurely as we move over the tundra, pausing whenever we see polar bears to observe their behavior and capture photos. Tonight, if skies are clear, we’ll visit a heated Aurora Dome in hopes of witnessing the northern lights through the circular Plexiglass roof offering a 360-degree view on the night sky. The phenomenon often begins slowly as a faint white glow, then intensifies in scope and color as the lights undulate across the sky. Most frequently the aurora appears as a shimmering green curtain, though occasionally it is red or even purple. The Hudson Bay Inuit believed the lights were the mystical display of their ancestors’ souls dancing in the sky. Though we now know the aurora borealis is caused by the interaction of the solar wind with Earth’s magnetic field, they are no less entrancing.

Day 6: Churchill / Winnipeg
With free time in town this morning, you may wish to pick up some last-minute handicrafts or souvenirs. After a farewell lunch in Churchill, we fly back to Winnipeg aboard our chartered plane, with a final dinner at our hotel before our adventure concludes.

Day 7: Winnipeg / Depart
After breakfast, transfer to the airport for departing flights.

Please note: Itineraries may vary slightly and activities may happen at times different from what is listed, but inclusions are the same.

An important note on polar bear viewing: Since 1989, we have run approximately 1,500 departures to Churchill to view polar bears, and we’ve missed seeing them on only a handful of occasions. Some of our sightings are up close, and others are from afar, or even from a helicopter. It’s important to remember that while there is no better opportunity to see polar bears in the wild than our Churchill trips offer, the experience is weather-dependent. That means viewing polar bears—and the distance at which we may see them—is unpredictable and not guaranteed. Check out more details on the ebbs and flows of the Churchill polar bear viewing season.