Fill out the form below to receive additional information about our Tundra Lodge Adventure or give us a call at 800-543-8917. 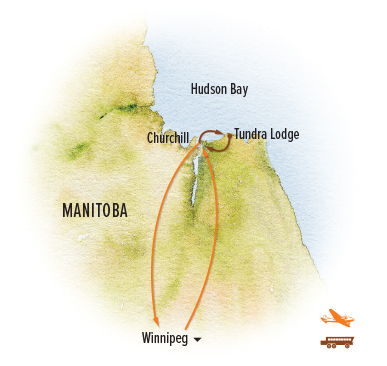 A true northern expedition! Based at the world-renowned Tundra Lodge, you'll journey even deeper into the most remote corners of the region by helicopter and private Polar Rover. Take a scenic October helicopter flight that departs directly from the tundra. Make the most of vibrant subarctic fall foliage during a time when contrasting creamy white polar bears are wandering in from throughout the region. Soar over the tundra while surveying the colorful landscape, remaining on the lookout for other Arctic wildlife, too. Weather is generally a little warmer at this time, allowing excellent opportunities to spot caribou in particular.


Day 1: Winnipeg, Manitoba
Arrive in Winnipeg, once a fur-trading post and boomtown for the Canadian Pacific Railway, today Manitoba’s cultural and commercial capital at the eastern edge of Canada’s vast prairies. Transfer to the historic Fort Garry Hotel, grande dame of Winnipeg hospitality and one of the city’s most prestigious landmarks. Meet your Expedition Leader at an orientation and welcome dinner this evening.

Day 2: Winnipeg / Churchill / Tundra Lodge
Fly to Churchill and transfer to the Tundra Lodge by Polar Rover, watching for Arctic wildlife against the vast tundra backdrop along the way. A presentation on polar bears by our Expedition Leader provides an enlightening introduction to our northern adventure. Dinner this evening is prepared by our professional chef, who resides at the lodge throughout the season. Don’t be surprised, though, if our meal is interrupted by a mad dash to the windows to watch a polar bear lumbering over the muskeg or snow around the lodge.

Days 3 & 4: Tundra Lodge—Arctic Helicopter Flight & Polar Bear Viewing
The Tundra Lodge is strategically positioned at the beginning of each season in a spot that attracts the greatest number of polar bears in the Churchill area. Delve into the deeper corners of the region on a scenic fall helicopter flight that departs directly from the tundra. From the air we may see roaming polar bears in contrast against the reds and oranges that distinguish the season's grasses, shrubs and lichen. Landing farther afield on the tundra, you'll disembark to explore on foot, looking for Arctic fox and Arctic hare and perhaps even crawling inside an unoccupied polar bear den.

During your days on the ground, inquisitive bears often approach the lodge, which features rows of windows and raised observation decks to accommodate our own curiosity. We find Ursus maritimus even more majestic up close than we could have imagined. Yet these giant bears, the largest land carnivores in the world, are charming and whimsical, too, and we are aware of what a rare treasure it is to see them in their wild habitat. As we watch them interact, we're delighted by their antics and rugged beauty. We may see mothers protecting and teaching their cubs, young males play-fighting, or massive adults patrolling a shore piled with crimson seaweed.

The unique location of the Tundra Lodge, combined with full-day excursions in two special all-terrain tundra vehicles called Polar Rovers, affords lodge guests the best possible wildlife encounters in the region. The small spit of land where the lodge is located often attracts the greatest number of bears in the entire area. In addition to polar bears, we may see caribou, Arctic fox, Arctic hare, ptarmigan and snowy owls. At the end of each exhilarating day, we retire to our cozy accommodations for dinner and presentations. In the light cast by our lodge across the frozen tundra, we look for the illuminated eyes of animals. And if we are fortunate to have a clear night, the Northland’s spectacular natural light show may appear as darkness descends—Churchill has some of the world’s most concentrated aurora borealis activity.

Day 5: Churchill—Dog Sledding / Winnipeg
This morning we board our Polar Rover, leaving the coastline of Hudson Bay in the distance as we make our way back to Churchill. Our return flight to Winnipeg is scheduled to depart in the mid-afternoon, to offer as much time as possible for exploring Churchill today. This rough-and-tumble town was once a historic Hudson's Bay Company fur trading post, and even today it retains much of its frontier character. A special highlight this morning is a dog sled ride—slightly less traditional during this time before the snow comes, we'll be pulled on carts. We'll meet a local musher and his team, spending time with the enthusiastic huskies before taking turns riding behind them on a thrilling excursion through the boreal forest. If time permits, you may be able to pick up a few northern handicrafts and souvenirs or take an optional helicopter tour over the tundra before we depart. We'll have lunch together before flying back to Winnipeg, where we have a final reception before our adventure concludes.

Day 6: Winnipeg / Depart
After breakfast, a transfer to the airport is provided for homeward flights.

An important note on polar bear viewing: Since 1989, we have run approximately 1,500 departures to Churchill to view polar bears, and we’ve missed seeing them on just a handful of occasions. Some of our sightings are up close, and others are from afar, or even from a helicopter. It’s important to remember that while there is no better opportunity to see polar bears in the wild than our Churchill trips offer, the experience is weather-dependent. That means viewing polar bears—and the distance at which we may see them—is unpredictable and not guaranteed. Check out more details on the ebbs and flows of the Churchill polar bear viewing season.
Interested in extending your trip? Link it up with another adventure!
Repeater Layout : vertical-2up
Extra Day in Winnipeg

Offered on all polar bear trips! Learn about the Northland's natural history, Inuit culture, Canada's fur trade and more as we explore historic Winnipeg and its world-class Manitoba Museum.
1 Day / Oct & Nov / From $285


Click here to see your trip details PDF. You should also receive it by email momentarily.
Ask a Question
Fill out the form below to receive additional information about our Tundra Lodge Adventure or give us a call at 800-543-8917.
Download Trip Details
Receive our handy trip PDF by email and have everything you need at your fingertips, including highlights of the trip, itinerary, accommodations, and full details on dates, prices and logistics.


Click here to see your trip details PDF. You should also receive it by email momentarily.
/polar-bear-tours/tundra-lodge-adventure/itinerary/autumn-air-itinerary/
Physical Requirements