Switzerland is a multilingual wonderland! Journey to this European country and you may hear people conversing in dialects of Swiss German in Zurich, Romansch in St. Moritz, additional dialects of Swiss German in Zermatt and Murren, and Swiss French in Montreux and Geneva. These cities also reflect the culture of the language, from café-lined streets in Geneva to stereotypical “German” Alpine scenes in the German regions.

From the early middle ages through the Industrial Revolution, Switzerland was governed in a loose confederacy structure, with a monarch at the head and powerful families controlling the urban and rural cantons. These families benefitted from retaining their ancestral languages and thus regional language preferences emerged that exist to this day. School children must study their regional language and one other official language in school, plus most also learn English. 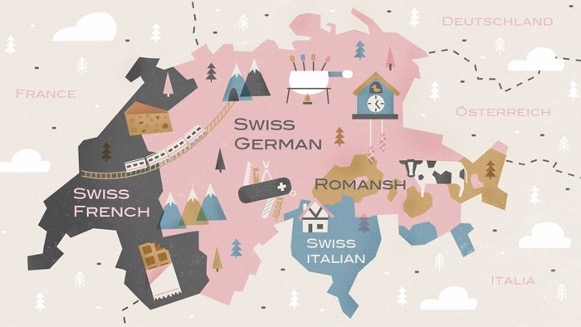 Over 60% of the population speaks Swiss German (Schwyzerdütsch) Within this broad category, numerous dialects exist in different regions, tied to the family and political control of each area that existed for hundreds of years. Sometimes people from one region cannot understand the Swiss German spoken in another! You most likely will not be able to understand Swiss German even if you are fluent in Standard German. The good news is that children learn Standard German (Hochdeutsch) in school. Also, most people write in Standard German, and it serves as the official language for government proceedings and documents.

People in the western region of Switzerland, near the French border, speak Swiss French, about 20% of the overall population. Unlike Swiss German, people fluent in French can easily understand Swiss French. While different phrases and the way in which people express numbers varies, the French does not differ too greatly.

People who speak Italian will have no problem communicating with people in the south of Switzerland who speak Swiss Italian. The main difference is that some phrases are direct translations from Standard German and Swiss French. For example, instead of ordering a cornetto at the bakery (the Italian word for croissant), you would say chifer (the German word for croissant).

The government did not recognize Romansch as an official language until 1996. Only about 37,000 people in the more remote, south-eastern parts of Switzerland speak this language, but it is unique to the country. It is a combination of a Romance language and German, a blend of the Roman years of control and German tribal influence.
Travel on These European Adventures
Repeater Layout : vertical
Wild Nature of Croatia & Slovenia 12
New Itinerary!