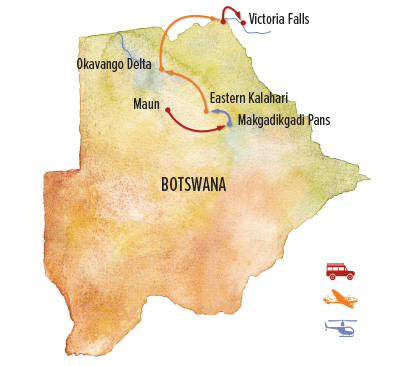 Days 1 & 2: Maun, Botswana / Makgadikgadi Pans National Park
Our Botswana family safari begins in Maun, where our Expedition Leader meets us at the airport. Then we're off for Makgadikgadi Pans National Park in the Kalahari Desert—360,000 square miles of sandy, semi-arid savanna that sustains a surprising amount of wildlife. Our first two days reveal the park's western reaches, where a multitude of game ranges across a landscape of scrub, palms, riverine trees and grassy plains. Our classic tented safari camp overlooks the Boteti River, a lifeline flowing through these parched environs that  Africa’s second-largest zebra and wildebeest migration. We frequently see other animals stopping for a drink in front of , too—oryx, springbok, zebra, wildebeest, Kalahari lion, cheetah, hyena, jackal ostrich are often on view.

Varied activities will delight family members of all ages, including a 4x4 wildlife drive with a picnic lunch in the bush, a private boat cruise on the Boteti River when water levels permit, and a rare opportunity for a walking safari with local Kalahari bushmen who reveal as much about their indigenous culture as the native plants and wildlife we observe. As the sun sets, enjoy sundowners overlooking the river escarpment where we may view elephants at close range. We often see lounging crocodiles, too—our camp's namesake. At the end of each full and gratifying day, return to camp for dinner under the twinkling stars, followed by conversation around the campfire.

Days 3–5: Eastern Kalahari—Makgadikgadi Pans
Transfer by private helicopter to the eastern side of the Kalahari, enjoying a thrilling aerial view of the stark landscape and roaming wildlife below. Our tented camp rests on the edge of the world’s largest salt pan, an oasis of comfort shaded by acacias and palms. The Makgadikgadi Pans formed when an ancient lake evaporated thousands of years ago, and these shallow depressions are all that remain of once-enormous Lake Makgadikgadi. Today, this vast expanse of salt glitters in the intense dry-season sun, evoking a moonscape. The only visible plant life is a thin layer of blue-green algae, but seasonal rains will later turn the pans into an important habitat for migrating animals, including wildebeest and one of Africa’s largest zebra populations, along with the predators that pursue them.

During our visit, look for unusual desert-adapted creatures on private game drives as we head out in search of gemsbok, springbok, red hartebeest, steenbok and many small mammals, birds reptiles. We'll also interact with a friendly habituated colony of meerkats. Quad bikes offer an exciting way to explore the lunar-like surface of the pans. Back at camp each night, enjoy some of the best stargazing on the planet.

Fly by light aircraft this morning into the contrasting environment of the Okavango Delta. Here in northwest Botswana, the Okavango River fans out over the Kalahari sands to create the world's largest inland delta—5,800 square miles of marsh, clear channels, lagoons and islands comprising a mosaic of diverse wildlife habitat. In 2014, the Okavango Delta became the 1,000th site to be officially inscribed on the UNESCO list of World Heritage Sites.

Our destination is the massive Khwai wildlife reserve, a community concession encompassing riverine woodlands, floodplains, mopane forest and open grasslands. Bordering the famous Moremi Game Reserve, the private conservancy lies along the Khwai River that is a lifeline for the region. Elephants abound, and year-round wildlife includes waterbuck, reedbuck and many antelope species, including red lechwe, along with frequent sightings of lion, leopard and spotted hyena. Khwai's varied habitats also support abundant giraffe, wild dog and the majestic sable antelope for which our camp, Sable Alley, is named. In addition, more than 450 bird species have been recorded. We explore on wildlife drives, walking safaris led by local guides, and by mokoro, the traditional poled canoe of the delta, giving local polers a chance to share their deep knowledge of this ecosystem and how it has sustained their people for generations.

Our eco-conscious camp on the banks of a peaceful lagoon is part of a community-based partnership that bridges safari tourism with Khwai village life, enhancing economic stability for the local people. Wildlife literally comes to us as elephant, buffalo and herds of plains game arrive to drink. Seasonal waterholes often attract lion, hyena, eland, zebra kudu, plus an assortment of smaller nocturnal species such as porcupine, genet, jackal and honey badger.

Day 9: Khwai Private Reserve / Victoria Falls, Zimbabwe
After a last morning wildlife activity on the Khwai Reserve, depart by light aircraft for Kasane, Botswana. After border formalities, continue by road to Victoria Falls, Zimbabwe, where we have a privately guided tour of Victoria Falls. The massive cataract is located inside Mosi-oa-Tunya National Park, whose name in the local language means "the smoke that thunders," referring to the mighty falls and its abundant spray. The falls and park together comprise a World Heritage Site that spans both sides of the Zambezi River, encompassing terrain in both Zimbabwe and Zambia. We follow a network of trails along the rim to various vantage points over the falls. The vistas are dramatic along the mile-wide cataract, which plummets 350 feet into the Zambezi Gorge below. This evening, our Expedition Leader hosts a festive farewell dinner.

Day 10: Victoria Falls Tour / Depart
This morning, choose to or visit a nearby village where kids will love the opportunity to meet African children. Just outside the hustle and bustle of the Victoria Falls tourist zone, we interact with locals tending their crops or going about their chores, enjoying a glimpse into daily rural life. It's a fitting finale to our Botswana family safari, which comes to a close as we transfer to the Victoria Falls airport to meet departing flights later this morning.


Click here to view the seasonal variations of weather and wildlife viewing in Botswana.
Interested in extending your trip? Link it up with another adventure!
Repeater Layout : vertical-2up
Wild Cape Coast Extension
Extension