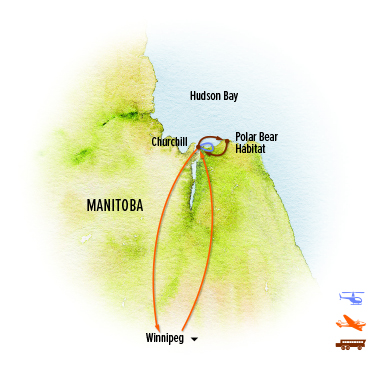 Day 1: Winnipeg, Manitoba
Our Churchill family adventure begins in Manitoba’s capital of Winnipeg. On the eastern edge of the Canadian prairie, the city’s historic fort and modern glass skyscrapers intersect where the Red and Assiniboine rivers meet. As Canada’s “Gateway to the West,” Winnipeg has long been a transportation and commercial center—initially as a fur-trading post and later as a hub for the Canadian Pacific Railway. Its cultural riches range from well-preserved archaeological sites to world-class museums and a resident ballet company. Upon arrival, transfer to the Fort Garry Hotel, built in 1913 as one of Canada’s grand railway hotels and an elegant landmark of hospitality still today. This evening, meet your Expedition Leader for a casual welcome dinner and an orientation designed to inspire enthusiasm for the North in explorers young and old.

Day 2: Winnipeg / Churchill—Dog Sledding
Watch the landscape change from rolling prairie to flat, pond-pocked tundra as we fly north to Churchill by private chartered plane this morning. Once the site of a Hudson’s Bay Company fur-trading post established in the 17th century, this frontier outpost on the shores of Hudson Bay has evolved into an important seasonal grain port and a commerce portal for Inuit communities farther north. Inaccessible by road, Churchill is surrounded by a wilderness of boreal forest, tundra and winter sea ice that forms on the bay—a remote home base for our Arctic family adventure. It lies along a major polar bear migration route near Wapusk National Park, and we keep our eyes peeled for polar bears from the moment we land. Early in the season, their creamy white coats contrast against the fall colors of the tundra, making them easy for young eyes to spot. Depending on when the bay freezes, there may be a chance to see bears from the bus, aboard our Polar Rover, or from the air.

This afternoon, get acquainted with a traditional means of northern transportation on an authentic dog sled ride. Churchill is the terminus of the famous Hudson Bay Quest, a grueling 220-mile dog sled race that traces the history of the fur trade. We meet a local musher and spend some time getting to know the sled dogs, some of which may have run the Quest, and listen to mushers' stories before bundling up for a brisk ride through the boreal forest. As the sled cruises over the snow, listen for excited yips and howls—running is truly in these dogs’ nature, and there’s nothing like feeling the power of paws, with the crisp Arctic air in your face. When the autumn snow cover isn't yet sufficient for sledding, we ride in a wheeled cart, which the dogs pull with equal enthusiasm. Once darkness falls, look up: though the Arctic night sky is often cloudy over Churchill this time of year, the town lies directly beneath the auroral oval, meaning we might witness the glow of the northern lights when conditions are just right.

Day 3: Tundra Wildlife Watching by Polar Rover
The Churchill area hosts Canada's largest concentration of polar bears each fall. This stark landscape is home to other wildlife, too, and while wild creatures can be elusive, we'll look for Arctic hare, Arctic and red fox, moose, caribou, gray wolf, wolverine, mink, marten, lynx, snowy owl, ptarmigan and lemmings. The tundra is often bare in mid-fall, but when snow covers the terrain, make a game of finding animals wearing coats of white camouflage—though the polar bear, with its cream-colored fur, tends to stand out. When encroaching cold wraps the land, strong winds and frigid weather can create intricate ice crystals and snowy drifts, burying the red kelp beds and orange lichen-covered boulders along the shoreline under a blanket of white.

We spend an entire day on the tundra in Nat Hab’s unique Polar Rover—our monster-truck-sized transport designed for overland travel in search of Arctic wildlife. Built to accommodate up to 35 passengers, we generally take no more than 16, ensuring a window seat for all. Smaller numbers ensure ample room on the outside observation deck, too, where a steel mesh floor allows you to view polar bears that occasionally wander right beneath our feet. At every turn, our Expedition Leader interprets this fragile, changing ecosystem, sharing fascinating details about the resident wildlife, including how polar bears thrive in such a harsh environment.

Day 4: Tundra Helicopter Flight / Exploring Churchill's History & Culture
A helicopter flightseeing excursion offers a thrilling aerial perspective on the open tundra, frozen and Hudson Bay as we scout for wildlife below. We hope to spy roving polar bears from the air, perhaps a mother lumbering along with her cubs or a lone male roaming the shore. We may also have a chance to track migrating caribou as we survey the immensity of the Arctic landscape from on high.

Later we explore the town of Churchill, where the Hudson’s Bay Company established the Prince of Wales Fort across the Churchill River in 1717 as part of its vast fur-trading network across the Canadian North. Indigenous people were here much earlier, and they still hold an important presence in the cultural life of Churchill. We'll meet local people and hear firsthand about the heritage and traditions of the Inuit, Metis and Dene, including on a visit to the Itsanitaq Museum. We also learn about regional ecology from resident naturalists and a local dog musher—entertaining "science lessons" that may just inspire the next young Arctic explorer.

Day 5: Churchill / Winnipeg
This morning there's  last chance to go in search of wildlife on the edge of town before a farewell lunch in Churchill. We then transfer to the airport for our mid-afternoon flight back to Winnipeg. This evening, our Arctic adventure winds up with a family-friendly celebration at our hotel.

Day 6: Winnipeg / Depart
After breakfast, transfer to the airport for homeward flights.

Please note: Our Churchill Arctic Family Adventure itinerary is flexible to accommodate varying weather conditions, particularly as weather dictates safe windows for helicopter flights and landings. Days 3 and 4 are interchangeable and may run in reverse order, and dog sledding may also swap days to accommodate helicopter flights. The exact pacing of the itinerary is at the discretion of our Expedition Leader, but inclusions will remain the same.

An important note on polar bear viewing: Since 1989, we have operated approximately 1,500 departures to Churchill to view polar bears, and we’ve missed seeing them on only a handful of occasions. Some of our sightings are up close, and others are from afar, or even from a helicopter. It’s important to remember that while there is no better opportunity to see polar bears in the wild than our Churchill trips offer, the experience is weather-dependent. That means viewing polar bears—and the distance at which we may see them—is unpredictable and not guaranteed. Check out more details on the ebbs and flows of the Churchill polar bear viewing season.