Fill out the form below to receive additional information about our Wild Switzerland: Peaks, Lakes & Glaciers or give us a call at 800-543-8917. 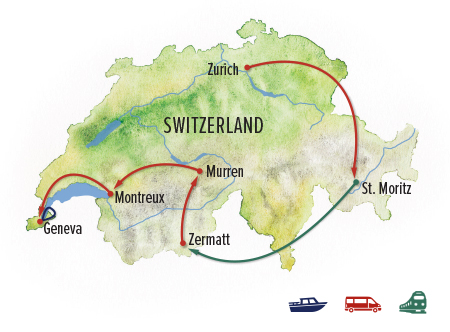 Day 1: Zurich, Switzerland / Wasserauen / St. Moritz
Arrive in Zurich this morning, where you're met and transferred to our group meeting point. After a short orientation, set off for St. Moritz by way of Appenzell, Switzerland's most traditional district that's renowned for its mountains and dairy culture. Admire charming villages, carved wooden chalets and maybe even some flower-bedecked cows among Appenzell’s rolling green hills, backdropped by 8,200-foot Mount Santis. Ride the Wasserauen cable car to the summit, then take a short walk to the rustic Aescher Inn for lunch, perched precariously on a cliff below Ebenalp Peak. Once a guesthouse for pilgrims seeking the guidance of nearby hermit monks, today the inn is a place for festive consumption of hard cider and rosti—Switzerland's famous shredded potato pancake. Enjoy the panorama from the sundeck, plus a short hike nearby, before heading back down. This afternoon we traverse a high mountain pass to reach St. Moritz. This small town gained fame for its healing mineral springs some 3,000 years ago, though more recently it's recognized as a birthplace of Alpine winter tourism, having twice hosted the Winter Olympics.

Day 2: Swiss National Park
The elegant resort village of St. Moritz sits at nearly 6,000 feet on the southern slope of the Albula Alps. Here, the land rises dramatically from the hills of central Switzerland to craggy heights divided by steep-sided valleys. This is the Upper Engadin—the only Swiss watershed that flows to the Black Sea. A highlight is Swiss National Park, a 65-square-mile protected enclave that is the country's only national park and the oldest park in the Alps, established in 1914. It is designated by the International Union for the Conservation of Nature (IUCN) as a category 1 nature reserve, the highest level of protection for its wild landscapes and animal inhabitants. As we follow some of the park’s 50 miles of footpaths, we have our best chance to see Swiss wildlife including ibex, chamois, marmots, bearded vultures and golden eagles. After a full day in the park, return to St. Moritz for dinner and time to explore around town.

Day 3: St. Moritz to Zermatt via the Glacier Express

Departing from St. Moritz early this morning, board the Glacier Express train to Zermatt. This all-day journey through the Valais, Uri and Graubunden cantons is one of Switzerland's iconic rail experiences. Distinctive red and white train cars run on a historic narrow-gauge railway operating since 1930. Traveling first class in carriages with panoramic windows that wrap overhead, we pass many isolated alpine villages along our route. The Rhine Gorge—known as the Grand Canyon of Switzerland—is a highlight. So are the Albula Line's engineering marvels including the Solis Viaduct, Landwasser Viaduct and helical tunnels, which stand as monuments to the pioneering days of Swiss railway-building and hold UNESCO World Heritage status. Known as the slowest "express” train in the world, this is not high-speed transport. But it's surely among the most memorable of journeys, as the 8-hour, 181-mile route wends its way across 291 bridges and through 91 tunnels in the heart of the Swiss Alps. Ultimately we reach Zermatt, the car-free town in the shadow of the Matterhorn and 37 other peaks that rise above 13,000 feet. This terrain has long drawn active nature lovers including skiers, hikers, alpinists and mountain bikers. We arrive in time to explore the village, peppered with pointed church steeples and quintessential Swiss chalets, before sitting down to dinner.

Day 4: Zermatt—Gornergrat Observatory
This morning, take a guided nature walk near Zermatt, where lush, rolling terrain is surrounded by some of the highest and most dramatic peaks in the Alps. Zermatt’s environs include six protected forests and 10 designated wildlife sanctuaries home to black grouse, chamois, deer, alpine hare, ptarmigan and ibex. At least 40 local plant species are rarely found in other parts of Switzerland, and seven are endemic to Zermatt. After lunch in town followed by another local hike, board a cog rail train to ascend to Gornergrat, an observatory that sits above 10,000 feet. Set in an unspoiled environment, with clean, dry air and year-round accessibility via the train, Gornergrat has provided outstanding conditions for astronomy and astrophysics research since the mid-20th century, not to mention unobstructed views of the Matterhorn, Monte Rosa Massif and huge Gorner Glacier, which is actively retreating. Drink up the alpine air on an afternoon hike, then spend the night atop Gornergrat at 3100 Kulmhotel, enjoying views in solitude as day-trippers descend before dusk.

Day 5: Zermatt / Grimsel Pass / Murren
The first ascent of the Matterhorn was in 1865. Avid mountaineers have been traveling to the small town of Zermatt to climb and hike ever since. Mark Twain even came in 1878 and wrote a satirical story about his misadventures, "Climbing the Riffelberg." From Zermatt, descend via another train to a nearby town where we meet our vehicle and ascend north by road into the Bernese Oberland. This region, part of the Jungfrau-Aletsch UNESCO World Heritage Site, contains some of the highest mountains in the Swiss Alps. We’ll see plenty of them as we climb a series of breathtaking hairpin turns to reach 7,100-foot Grimsel Pass. In the past, mule traders transported Swiss cheese over dizzying paths to Piedmont. Piedmont traders brought wine, rice, corn and leather in exchange. We stop at the top to explore the area around the pass, ringed by rugged peaks. Continue to Murren, an idyllic pedestrian village perched high on a mountainside above the Lauterbrunnen Valley, famous for its towering rock walls and 72 thundering waterfalls.

Day 6: Murren—Eiger, Monch & Jungfrau
Few views are as glorious as the one that greets us across the valley this morning. Even within the impressive context of the Swiss Alps, the triple peaks of the Eiger, Monch and Jungfrau are nothing short of stunning. Eiger, meaning “high peak,” is actually the shortest of the three at 13,013 feet but perhaps most famous for its towering Nordwand, a 5,900-foot sheer face of rock and ice that has continued to spawn some of mountaineering’s (and Hollywood’s) most epic climbing tales since it was first conquered in 1938 by an Austrian-German expedition. Jungfrau, the 13,642-foot “virgin,” was named for the dairy-farming nuns who grazed their cattle in the wildflower-filled meadows at its base. And the Monch towers in between, the three together comprising a massive wall that looms over the Bernese Oberland and Swiss Plateau. All the peaks are in view from various hiking trails around Murren, and we'll spend the afternoon wandering the mountainside among wildflowers and waterfalls that plummet into the Lauterbrunnen Valley far below. A wide range of hiking trails is available at the top, with a good chance to spot a wandering ibex or a paraglider soaring off the side of the mountain. Return to Murren for dinner, with time to explore the village on foot this evening.

Day 7: Schilthorn / Montreux—World Heritage Vineyards
Our day begins with a ride to the top of the Schilthorn on one of the most famous cable cars in the Alps. While we'll hope for clear weather to survey the 360-degree views from the 9,744-foot summit, made famous in the James Bond film On Her Majesty's Secret Service, it's a thrilling ride regardless. Descending to Switzerland’s lake country, we wind down out of the Alps to reach Montreux on the shore of Lake Geneva. Follow a trail of wineries, castles, farms and pastoral hills as we pass through regions famed for their namesake cheeses, including Emmental, with its Bernese timber farmhouses, and medieval Gruyere, with its hilltop fortress. Montreux lies at the heart of a legendary wine region, the Lavaux Vineyard Terraces UNESCO World Heritage Site, a thriving cultural landscape for nearly a millennium. The area's most historic guesthouse is our base for exploration. Winemaking has been a part of the lifestyle here since the 12th century, when monks planted the first vines, and we'll sample several varietals this afternoon during a private tasting.

Day 8: Montreux—Glacier 3000 / Private Lake Geneva Cruise
Ascending from Montreux to the highest point in the Vaudois Alps, we explore Glacier 3000 this morning. The glacier is open year-round for winter recreation, and our vantage point from the top of the cable car offers views of 24 summits rising above 13,000 feet. Enjoy lunch and a  panoramic vista at the mountain station, designed by renowned Swiss architect Mario Botta. Our time on the glacier concludes with a walk on a high-altitude trail leading to a spectacular overlook. This afternoon, enjoy a relaxing private cruise on Lake Geneva aboard a solar-powered boat, admiring the waterside villas and mountain backdrop. The Montreux Riviera has long drawn celebrities, from Charlie Chaplin, who had a manor house here, to Freddie Mercury, whose band Queen recorded its final album in Montreux. The city is also famed for its world-class jazz festival founded in 1967. This evening, gather for a sunset farewell dinner overlooking the lake.

Day 9: Montreux / Geneva / Depart
Transfer this morning to cosmopolitan Geneva on the opposite end of the lake, surrounded by the Alps and Jura mountains. The birthplace of Swiss watchmaking and home to some of Switzerland's finest chocolate makers, Geneva is also the headquarters of the European United Nations and the International Red Cross. Our Swiss adventure concludes at the Geneva airport where we meet departing flights.

Please Note: This itinerary is meant as a guideline and may change due to weather and snow conditions. On some occasions, adverse conditions may require us to deviate from our intended itinerary, in which case we will provide the best available alternative. And we’ll make a great adventure of it!


Click here to see your trip details PDF. You should also receive it by email momentarily.
Ask a Question
Fill out the form below to receive additional information about our Wild Switzerland: Peaks, Lakes & Glaciers or give us a call at 800-543-8917.
Download Trip Details
Receive our handy trip PDF by email and have everything you need at your fingertips, including highlights of the trip, itinerary, accommodations, and full details on dates, prices and logistics.


Click here to see your trip details PDF. You should also receive it by email momentarily.
/europe/switzerland-mountains-lakes-trip/itinerary/
Physical Requirements