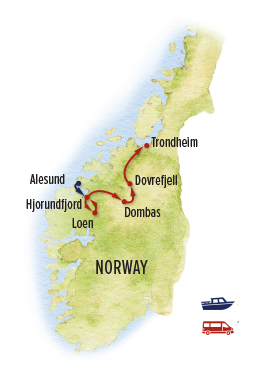 Day 1: Alesund, Norway
Arrive in Alesund, a lively port town on the west coast of Norway. The city enjoys a striking setting on a string of islands stretching out to the Atlantic Ocean. Fishing is an important economic enterprise, with cod, shrimp and crab a major share of the catch. Alesund is the cultural center of the More og Romsdal region and is known for its many festivals showcasing theater, literature, music and food. This evening, gather for a welcome dinner with our Expedition Leader.

Day 2: Alesund Tour / Private Wildlife Cruise to Runde Island
On a guided walking tour of Alesund, admire the prevalent Art Nouveau style in which the entire city was rebuilt following a fire in 1904. We’ll visit the Art Nouveau Center, which chronicles this influential movement in early 20th-century design and architecture, then tour the Fisheries Museum, housed in a wooden 1861 warehouse that escaped the fire. From the Town Park, those who wish may hike the steps to the Fjellstua viewpoint atop Mt. Aksla for a panorama of the city, islands and surrounding Sunnmore Alps. We also visit Godoy, the farthest offshore island from Alesund, where scenic coastal views await from the famous lighthouse at Alnes, in operation since 1876. This afternoon, board a high-speed Zodiac RIB boat for a sea safari to Grasoyane seal colony and the bird cliffs of Runde Island. Half a million seabirds nest here annually, including 100,000 pairs of puffins in June and July, plus sea eagles and large colonies of great skuas, gannets and shags.

Day 3: Private Hjorundfjord Cruise / Norangsfjord—Oye / Kayaking
Board a chartered cabin cruiser for the voyage up Hjorundfjord. Many of Norway’s most famous fjords have become heavily ‘discovered’ in recent years. Not so with tranquil Hjorundfjord, lesser known but equally beautiful and, crucially, off limits to large cruise ships. Extending 21 miles into the Sunnmore Alps, Hjordundfjord is one of the longest fjords in Norway, flanked by steep, pointed peaks that rise more than a mile above sea level. Small villages dot both sides of the fjord, with boats providing the only access for centuries. Given their isolated locations, many of these unspoiled hamlets retain an authentic rural identity. We stop in Trandal, a tiny farming community noted for its scenic swing, which appears to soar right over the fjord itself.

Branching off into Norangsfjord, we disembark at the village of Oye at the head of the fjord. Lunch awaits at the Hotel Union Oye, one of the most distinctive small hotels in all of Europe. Since it opened in 1891, the elegant inn has welcomed aristocrats, artists, romantics and royalty. Its 30 rooms are individually furnished with antiques and are named after notable guests, including Kaiser Wilhelm, King Oscar II, authors Karen Blixen and Sir Arthur Conan Doyle, composer Edvard Grieg, playwright Henrik Ibsen, and explorer Roald Amundsen. This afternoon, kayak in the glassy waters of Norangsfjord before returning to our hotel for a relaxing evening.

Day 4: Norangsdalen Valley / Loen Skylift
Discover the wild beauty of the Norangsdalen Valley this morning as we travel inland from the head of the fjord. Word of its scenic splendors began to spread in the 19th century, as tourist ships anchored up at Oye and many famous guests were transported by pony and trap along the ancient road through the valley to Hellesylt. Despite that early fame, Norangsdalen is less visited than other places in coastal Norway, and we survey vistas unchanged for a century or more. Sheep wander the lower slopes of near-vertical peaks whose slopes are dotted with sod-roofed stone huts recessed into the mountainside for protection against avalanches and strong winter winds. Waterfalls plummet into streams that feed jade-green lakes. Continue to Loen at the head of Nordfjord and ride the cable car to the 3,316-foot summit of Mount Hoven where we have lunch on top and explore the alpine zone on a network of trails. After an exhilarating day, return to Hotel Union Oye for a memorable dinner of creative local fare, in view of the romantic gardens.

Day 5: Trollstigen / Andalsnes / Oppdal
One of the world's most dramatic drives awaits on the famous Trollstigen—the Troll's Path—as we travel to Andalsnes. The road is an engineering marvel, navigating 11 hairpin turns on a 10% grade, including a natural stone bridge across the Stigfossen waterfall. Opened in July 1936 by Norway's King Haakon VII after eight years of construction, the tortuous route provided summer passage for farmers on both sides of the mountain to reach trade venues for buying and selling livestock. From Andalsnes, our route traverses the mountaineering capital of Norway, and we stop to gape at Trollveggen, Europe’s tallest vertical rock face with a straight drop of 3,300 feet, and 5,000-foot Romsdalshorn, with its imposing black spire. Following the Rauma River on to Dombas, we pause frequently to admire views of the rushing torrent and glacier-fed waterfalls in the shadow of jagged peaks. Continuing up the Driva River valley, we reach Oppdal and the historic mountain inn that will be our base for the next two nights.

Day 6: Dovrefjell National Park—Musk Ox Safari
Musk ox are our focus today, and we search for them with local guides on an overland hiking safari in Dovrefjell National Park, one of Norway's largest protected areas. This is the only place in Norway, and one of few in the world, where wild musk ox are found, and we have a good chance to view them, though we may have to hike for several hours to reach them. The ancient musk ox died out in Norway during the last Ice Age but was reintroduced from Greenland from the 1930s–1950s, thriving in the cold, dry climate of Dovrefjell, which its compact body and robust coat is well suited for. At first glance, a musk ox may look like a giant brown rock, its heavy, shaggy coat blending in with the neutral-toned surroundings. Once it moves, however, we get a sense of just how large these animals are, weighing as much as 800 pounds. Gentle herbivores, these ancient Arctic denizens roam the tundra to subsist on roots, mosses and lichen, and in summer, wildflowers and grasses. A member of the Bovidae family of hoofed mammals, the musk ox is more closely related to sheep and goats than oxen, and its fine undercoat called qiviut is used to make woolen garments that are warmer than sheep's wool and softer than cashmere. As we look for musk ox, we may also see wild mountain reindeer, willow grouse and possibly Arctic fox, enlightened by local guides who offer detailed insight into the area's flora and fauna.

Day 8: Trondheim / Depart
A transfer is included to the airport this morning to meet departing flights.
Repeater Layout : vertical


Click here to see your trip details PDF. You should also receive it by email momentarily.
/europe/norway-fjords-mountains-adventure-travel/itinerary/2022-oye-itinerary/
Physical Requirements